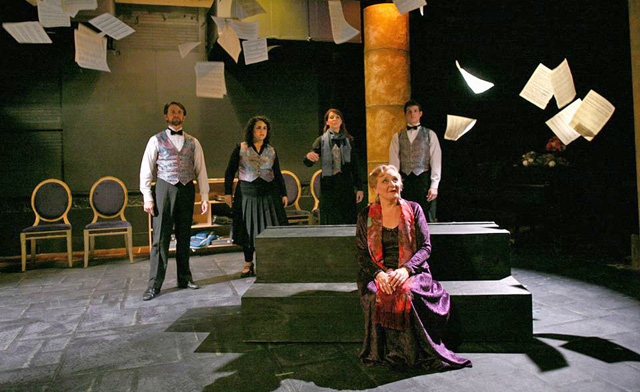 In The Old Mezzo, Alyssa (Eileen Schuyler) is conducting a Master Class for her students, and it is more about what she has experienced in life than about the music she sings. Only slightly similar to Terrence McNally’s Master Class which won the 1996 Tony as Best Play, Susan Dworkin’s take is quite different. All of us can find parallels in this story to our own experiences. While no two lives are the same, we all share similar ups and downs. Dworkin likes to write about ordinary lives crashing into history.

In this new play Dworkin gives us insights into how power, politics and money can change the nature of art. In peacetime the subtle process of grant making and government support can influence the direction that creative organizations take, just look at how the NEA (National Endowment for the Arts) and PBS have become the sadistic straw men that the Republicans and their candidates pretend will solve the nation’s debt problem.

In The Old Mezzo, most of the story takes place during wartime under a repressive government. Regardless of their talent, beloved singers, conductors, teachers and instrumentalists are forbidden to work or perform. Many of them are disappearing, never to be seen again. How you talk to people with government connections can change the course of a career, or even end it. The country all this is happening in is not stated specifically and left to your imagination. But the story itself is based on historic truth, for this has occurred in the old Soviet Union, in Europe under the Nazis; and with Argentina’s Desaparecidos and in today’s Middle East.

The cast is a true ensemble, delivering uniformly excellent performances as they fill multiple roles to tell Alyssa’s story. That Eileen Schuyler commands the stage is almost expected since she plays the title role. We are not disappointed, her acting ranges from the innocent young girl to the radiantly successful mid-career artist, and finally she is revealed as a starving survivor of unspeakable horror. Likewise, Elizabeth Donnelly inhabits the dual roles of Sally and Pow that sees her go from meek to powerful. Similarly the Marcy/Marcelle of Erin Ouellette is superb. Rylan Morsbach is the main love interest and he lights up the stage with his all-American optimism as Billy, while Ryan Winkles as the father and choir master conjures up a role very different from any he has ever played at Shakespeare & Company.

It’s not nice to second guess the creators, but one has to wonder just how strong the subject matter of this play is in terms of audience potential. While plays should not be chosen solely because of box office and ticket sales, timing is everything. This work could attract scads of music lovers if it were done during the Tanglewood season.

There is also the difficulty of choosing a play’s name. Including the word “old” in a title is a deterrent to a lot of young people. “Mezzo” is also a classical music term which could entice those who love Handel and Verdi to take a chance and fill some seats, but their numbers are in a state of serious decline. Every play starts with the handicap of being an unknown work, and the chances of a drama about a carpenter or convenience store clerk succeeding are also dicey. Will the audience only come from the construction and retail fields? Which is why show business is such a tricky business.

Turns out that when it comes to plays, success arrives more often when the focus is on the familiar. Everyone can identify with friends, family and relationships. If The Old Mezzo has a problem drawing audiences it will be because of this subconscious bias most people have to the unfamiliar. Some people go to theatre to explore aspects of their own lives, others go because they are more interested in the lives of others. The Old Mezzo falls into the latter category.

Kristen van Ginhoven has staged Dworkin’s play with both sturdy realism and surrealistic, sometimes magical, impressionism. Production wise, everything on the stage is on wheels, so the two weathered columns move around with a piano, a platform and a few chairs to make up the bulk of the flexible set. At one moment we are in Alyssa’s studio, the next in the Arena di Verona where she is singing in Aida.

There are more than a dozen music tracks used in The Old Mezzo. Many were integral to the plot. But they were hurt by inferior sound which muddied the delivery of the music. It is a shame really, and whether the muffled results were due to the speakers used, or the transfers someone made, the resultant mushy sound constantly undermined what was happening on stage. WAM Theatre operates on a tight budget, and so it is likely that this was one of those artistic tradeoffs that smaller, newer companies must often make. As you can tell, it pained me as a music lover.

The theatre at the Berkshire Museum never looked better, with the expanded stage which was left following the Barrington Stage Youth Theatre Production this past summer, and a modest, but well deployed lighting setup. For a while, emerging companies like WAM Theatre used the small obstruction-plagued space above the Beacon Cinema for performances, so the performing arts community is well served by the progress the Berkshire Museum is making by redefining this room as both a performing space and the home for its Little Cinema.

The Old Mezzo has much to recommend it, it is fascinating new play which went by in the blink of an eye. As always, their superb casts are the equal of any we see at the four major theatres in the summer. And at this time of year, with its dearth of theatrical activity, it is wonderful to be able to recommend it to you. Even if you don’t know the difference between a mezzo and a coloratura, it is a story that could apply to any field of endeavor where outsiders can dictate our lives. And that includes just about every field of endeavor these days.