Review: An Enchanting “La Bohème” by Candlelight in Bennington, Vermont 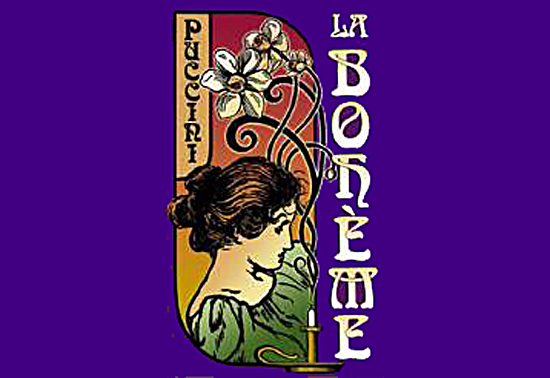 Review: An Enchanting “La Bohème” by Candlelight in Bennington, Vermont

It is often said that Vermont has more cows than people, but that is no deterrent to a vital arts scene taking root and flourishing alongside the corn and hay. In fact there are times that the quality of the art exceeds what one can find in the big cities. Last Saturday’s abridged performance of Giacomo Puccini’s La Bohème at the First Old Church in Bennington makes a very fine example of what a quintet of superb singers and a well tuned piano can accomplish in unexpected places hereabouts.

Of all the opera composers, Puccini is particularly favored by younger audiences both for the intensity of his romantic stories such as Turandot and Madama Butterfly, and the tremendous emotional singing it entails. As the story progresses, the score wraps around the unfolding action like a soundtrack. Most composers of opera were expert at this, but in opera, Puccini comes closest to the modern day and is able to convey hope – or heartbreak – with the passing of just a few measures. He speaks the language of modern audiences.

Presented by Alexina Jones and her Hubbard Hall Opera Theater (HHOT) from nearby Cambridge, New York, this La Bohème literally glowed as dozens of candles flickered throughout the historic landmark. Because the church was never designed to host opera, the organizers had severe challenges staging the work, but using the aisles, the pulpit stairways and the sanctuary itself, Henri Murger’s story of La Vie de Boheme came to life for the audience that congregated there, filling the old church with applause.

Like the similar 1849 play by Murger and Théodore Barrière, Puccini’s 1896 opera focuses on the relationship between Rudolfo and Mimì, ending with her tragic death. In the Hubbard Hall adaptation, the normally larger cast of ten roles plus many students, working girls, townsfolk, shopkeepers, street-vendors, soldiers, waiters, children etc. is reduced to five. Soprano Vedrena Kalas sang the role of Mimi, a seamstress, with great emotion and impeccable diction in a soaring voice that resonated throughout the space. Equally impressive was the magnificent tenor of Brian J. Kuhl (Rudolfo) whose stage presence equalled the excellence of his instrument.

Irina Petrik’s delicious and insouciant soprano was a bit lighter, but every bit as lovely as she soared with Puccini’s melody lines, both in arias and other combinations as Musetta. Marcello, her lover, was sung by Kevin Kees in a distinctive baritone that I could have listened to all weekend. Alexander Jones lent color as Alcindoro and the accompaniment was provided by the steady hands of Michael Clement at the piano. He made that one instrument sound like an orchestra in a transcription that is to be treasured.

The excellence of the singers is a testament to the excellence of opera training in the 21st Century. Long gone are the overstuffed divas of the past, whose excessive avoirdupois made it hard to believe that Mimi was a starving consumptive afflicted with TB. Likewise tenors who look more like Shrek or a linebacker are not the best choices for roles as starving artists. The youth, good health and superb abilities of this group of singers can not be overstated, they sang as well as they acted, and they acted as well as they sang.

Opera remains a form of music where excellence is judged by a singer’s adherence to the traditional. Only in the bel canto style of opera (Rossini, Donizetti) is originality permitted, and there only for the ornamental or florid passages where composers allowed the sopranos to show off. The remaining oeuvre demands only one thing, faithful reproduction of what the composer intended, with feeling and an interpretation that becomes part of the aria, not a distraction from it.

There is no problem changing elements of the plot, or the settings. But even that can go too far for some: the Metropolitan Opera’s Valhalla Machine introduced in 2000 for its Wagner Ring Cycle is a source of consternation to many Wagnerians who object to Cirque du Soleil tricks at the opera.

I found that the First Old Church worked well as a setting for a condensed, almost concert version of La Bohème. After all, other settings in opera are often employed, sometimes older or more often, modern. Opera being a creative art invites more creativity in turn. But don’t mess with the music.It would be unthinkable for a baritone to invoke an earthy timeworn voice like Bob Dylan’s. In fact, the gloss and sparkle that an opera aria exudes is still almost impossible to find anywhere in the pop realm, short of the three tenors.

The First Old Church in Bennington is a stunning Colonial edifice but is also a vibrant congregation with an arts program, and its 18th Century box pews follows the Colonial tradition when the high walls would also act to shut out winter drafts and insure privacy. Sitting in our little cubicle, it was hard to see much more than the pulpit and the tops of the singers head and shoulders when they were on ground level. But what this old church did, an unexpected blessing actually, was to make their voices soar in a way that larger concert halls and opera houses can only envy. I had expected that, being a church, the reverberations would be excessive, dulling the clarity of the words. Instead, from our vantage point at least, the sound was both transparent and clear, though my colleague, Gail Burns noted some “tinkling” in the high upper range, perhaps harmonics off the candle chimneys or similar. As an older male, I have lost some of my acute hearing range and so did not hear this. She found the unidentified harmonics “curious.”

The point is that The First Old Church – which has a growing interest in the arts – was the sort of place where you could focus on the brilliant singing with a dollop of staging to add to the lush sound. Jason Dolmetsch directed with imagination, and at times had the soloists passing by each box pew during the 90 minute presentation. The result is that we were often closer to the singers here than in an opera house. The lovely costumes were put together by Sherry Recinella. Amazingly, there were even super-titles projected on the front wall, though they turned out to be far too small to be read from the back row of the church unless you had the vision of a hawk.

The La Bohème in Bennington was the final performance of this traveling opera. HHOT has good reason to be proud of their “suitcase” operas. With its simple presentation HHOT offered quite a full and satisfying experience to the audience, one of gorgeous music that is beautifullly sung. When they are not performing, the company also runs a musical conservatory which singers and instrumentalists from the area are welcome to check out. In March they will be holding auditions for Barber of Seville.

Meantime, its next production will be a large step upwards for the company which will undertake six performances of Verdi’s La Traviata at the GE Theatre at Proctor’s in Schenectady. There will be a full orchestra for this full production. We have heard the players in both The Magic Flute and Don Pasquale, and it is superb.