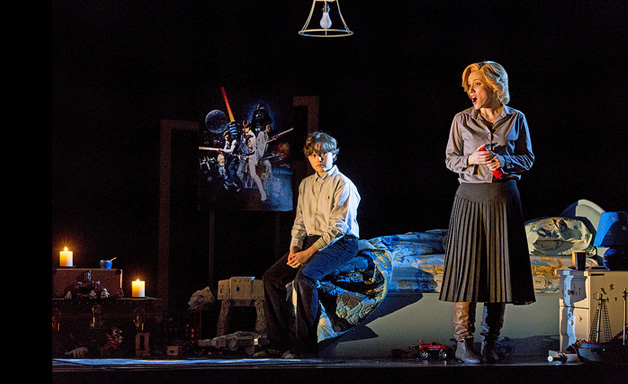 It could be said that 12-tone operas and ghost stories are a match made in heaven. The New York City Opera plays their heavenly matchmaker with this eerie production of Benjamin Britten’s “Turn of the Screw” at the Brooklyn Academy of Music. Engaging and well cast, it is brilliantly executed.

The chamber opera, based on the novella of the same name by Henry James, tackles the gravid themes of corrupted innocence, the supernatural, mental illness, pedophilia, and good versus evil. Originally set in mid-nineteenth century, director Sam Buntrock sets this production in the 1970-80’s replete with bean bag chairs, a console television, Star Wars posters and action figures, plus period hair and costumes.

The opera opens with the Prologue (Dominic Armstrong) singing of an unnamed Governess (played by Sara Jakubiak) hired to be the sole caretaker for two orphaned children who live with their absent uncle in a beautiful English country home. The orphans handsome and worldly uncle is never home and is preoccupied with work in London and charges the Governess not to bother him under any condition. So overwhelmed by his charm and power, she acquiesces to enter “a strange world for a stranger’s sake” and agrees to the unusual terms. Armstrong’s rich and haunting tenor voice immediately sets the tone for an ominous and eerie two hours to follow.

That “strange world” quickly turns from foreign to fiendish when it becomes clear that the initially idyllic home is haunted by the demonic specters of former valet Peter Quint (also Armstrong) who was killed in an accident on an icy road, and former governess Miss Jessel (Jennifer Goode Cooper) who mysteriously died after fleeing her job when she became pregnant.

The Governess learns from Mrs. Grose, the housekeeper, (Sharmay Musacchio) that Quint was a wily and manipulative deviant who sexually terrorized Miss Jessel and the entire estate. “He had a way of twisting them around his little finger,” she said. He particularly had a taste for the Governess’ young charge, Miles (Benjamin Wenzelberg), an unsettling and depraved pursuit that continues even after his death. This ghostly beguilement and the subsequent mental breakdowns and aggravations of both Miles’ sister, Flora (Lauren Worsham) and the Governess comprise the brunt of the opera until the tragic and poignant end.

Britten composed the opera using the 12-tone technique pioneered by the composer Arnold Schoenberg which utilizes all 12 notes of the chromatic scale and creates equality among all pitches, thus producing an atonal sound by omitting a key signature. This has the effect of creating dissonance and discord. In the style typical of Britten, “Turn of the Screw” is mostly at home in the 12-tone style but forays into traditional tonality for some gorgeous melodies. Many times an atonal composition can lose an audience because of its academic esotericism and lack of lyricism, but Britten uses it to perfectly compliment the horror story and pull the audience deeply in.

This cast is fantastic. Armstrong sends shivers up the spine as he deliciously revels in the debauchery and filthiness of Quint. His voice is boisterous and strong, yet has an ethereal quality that fits his character perfectly. Act two opens with Armstrong breathing only one word, “Miles,” in a series of adroit runs, embellishments, and glissandos in a desperate seduction that makes an innocuous name seem downright obscene but breathtaking in its sheer depravity.

Jakubiak delivers a tremendous performance as she evolves from a modest and naïve governess into one who is determined and maternally fierce as evil touches her life. She has a full timbre to her voice that moves with effortless dexterity and fills the hall. Musacchio shines as the housekeeper with fantastic acting chops and a rich contralto voice that luxuriates in the lower tones of her register.

The children add a rambunctious and ebullient energy covering seemingly every inch of the stage as they run around the set and flop about the furniture, acting as the cheerful antithesis to everything else in the opera. Worsham’s clarion coloratura voice seems to burst out of her petite frame with ease and aplomb, and the thirty-year-old singer’s portrayal of a child is simply astonishing. The stand-out of this first-rate cast is the precocious Wenzelberg. At only 13, his perceptiveness exceeds many adults. His deep and multi-faceted portrayal nimbly vacillates between childish innocence and frailty caused by emotional and sexual trauma, to one possessed by evil. His voice is sweet and pure, and time just seems to stop when he sings the heart-wrenching and melancholy, “Malo.”

The chamber opera conducted by the talented Jayce Ogren, utilizes a 14-piece orchestra with a single instrumentalist on each section with the exception of percussion with two performers. It’s a fabulously talented ensemble that creates a much fuller sound than expected from such a truncated opera orchestra.

The set heightens the drama and creepiness with its minimalistic décor. The ceiling is covered in light bulbs hanging from wires that from a distance look like spider webs. Set changes are made by furniture and the light bulbs strands rising and falling from the ceiling. The living room is the main set piece, and the window panes have missing sections that effectively give the impression that in this home “things have been done that are no good.”

Ultimately, this rendition of Britten’s “The Turn of the Screw” is tremendously engaging, creatively staged, excellently cast, beautifully sung, and seamlessly executed.

Teresa Sheffield is a comedian and journalist based in New York City. Be sure to check out her personal blog I F***ing Love Opera for her reviews and opinions on the art of opera.