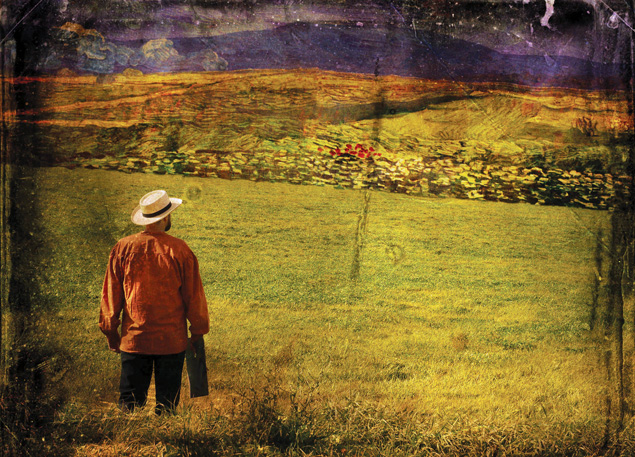 In VINCENT, Actor Jim Briggs takes a painterly approach to telling the story of the life of Vincent van Gogh. He lays down the basic brush strokes slowly at the beginning, reading from the hundreds of letters exchanged between the artist and his brother, Theo van Gogh, in a simple, straightforward voice. As the details accumulate, a fascinating tale emerges as this first production by the Starry Night Theatre Company debuts on the St. Germain Stage in Pittsfield, MA.

The Berkshires of Western Massachusetts welcomed the company with an almost full house, a near miracle for something without elves, grinches, scrooges or nutcrackers during the dark December days. Then again, this rural region is renowned for having almost as many theatre companies as cows.

The original play, as written by Leonard Nimoy, divides the play into two sections, the first in which we learn about the artist from his brother Theo through their letters to each other, and the second in which Theo talks directly to the audience about Vincent. It is a simple dramatic device that makes Act One purely expository, and Act Two not only dramatic, but revelatory.

Under the direction of Brant Pope, Jim Briggs portrays the story mostly as Theo, though at times, with a change of light, stance and voice, he also becomes Vincent, who then speaks for himself, and we discover the human being behind the legends and myths. The portrait Theo paints slowly fills in as the brush strokes multiply on his theatrical canvas, and by the end of the first half we know that Vincent and Theo were the sons of a minister, which explains the spiritual aspects the artist, and that both also practiced the most basic form of Christianity, that is, charity and compassion, towards each other, and their community. We learn that Vincent wanted to become a pastor and from 1879 he worked as a missionary in a mining region in Belgium where he began to sketch people from the local community. It was not long before he had the revelation that God wanted him to paint, not preach.

Once started on his path as a full time artist we find him constantly on the move, and no matter what hand life dealt him, his work grew in depth and honesty, and as a result he earned his place as a post-Impressionist painter whose work, notable for its rough beauty, emotional honesty and bold color, had a far-reaching influence on 20th-century art.

With this play, Jim Briggs returns to the theatre from whence he came. When he was younger he studied with Robert Y. Burns of Starlight Theatre in Williamstown, MA, and later appeared with the Williamstown Theatre Festival and other regional companies. Between acting roles, he attended Boston College Law School and became a practicing attorney in Boston and the Berkshires. Now retired from the law, he has returned to his first passion, theatre.

What is interesting about Jim Briggs and this production of VINCENT is the almost lawyerly approach to VINCENT, both in the Nimoy script and what you ultimately see on the St. Germain stage. He has paid scrupulous attention to the details of the entire enterprise. His hair, beard and costume perfectly duplicate the image of Theo van Gogh we see at the end of the play. The minimal set pieces are of the correct time period, grouped together in little settings that enable Briggs to move back and forth across the stage as he retrieves one letter or another. Dominating the upstage wall is a large framed screen upon which the drawings, watercolors and paintings of the artist are projected, and they are carefully coordinated to match the years in which the letters were written.

Act Two leaves the historical letters, the broad brushstrokes of the artist’s portrait having been laid out, and as it begins we see, for the first time, the brilliantly colored paintings that the artist is best known for. Briggs speaks, and we hear van Gogh’s heart talking, not the written words, and he takes us deep inside the conundrum of whether Vincent van Gogh was certifiably insane. He did lob off his ear at one point, and was odd enough in 1888 to have the whole town of Aries petition the sheriff to put him away.

In fact, he was epileptic. And 125 years ago, a grand mal seizure is the sort of thing that would indeed terrify people. It still does today. In most cultures, persons with epilepsy have been stigmatized, shunned, or even imprisoned. This is what happened to van Gogh.

Despite the indignities heaped on him, he painted optimistically. So it is with great dignity, and barely suppressed passion, that Briggs explains that van Gogh expressed his humanity through his work. Over time the details and depth of his paintings emerge in brilliant yellows and intense blues. Rather than the work of a madman, his hundreds of paintings reveal a fresh expression of life that was not that of someone who was depressed, or at odds with life. Sunflowers, starry nights, workers in the field are proof of how he celebrated the wonders of what he saw and loved, including his family, friends and neighbors.

Jim Briggs and VINCENT are a classic match of temperaments. His production is both enlightening and enjoyable. As anyone who has studied the life of this artist knows, he died of gunshot wound. It is believed that his epileptic medical condition was becoming so debilitating, and his awareness that artists mostly became famous after they died, contributed to his suicide.

He was 37. His work was then known to only a handful of people and appreciated by fewer still. Today his life and work is recreated on the stage by Jim Briggs and the Starry Night Theatre Company. It is not to be missed.