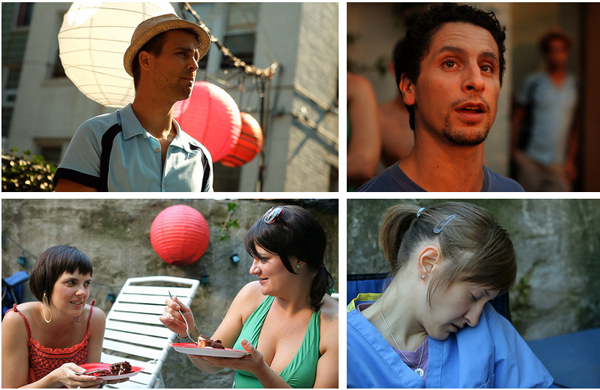 Turtle Hill, Brooklyn is Better than “Boys in the Band,” but without the bitchiness
Film Review by Larry Murray

Shortly after the film Turtle Hill started being shown at various gay film festivals around the country, word starting seeping into my Facebook feed and into emails from friends who had varying reactions of it. None called it dull, and in fact, the characters in this wonderfully understated independent film are both colorful, and within the lines. Just about every sort of person who you might meet during urban socializing is here, a mix of male, female, gay and straight.

Turtle Hill though is actually a story about Will (Brian W. Seibert, “Deleted Scenes”) who is celebrating his 30th birthday, and Mateo (Ricardo Valdez), a couple who like so many of us has been evolving into a committed relationship. We first meet Mateo when he brings a birthday cupcake to the still sleeping Will as the day begins. He asks Will what he would like – “name anything”- for this one day. Will responds by asking his mate to tell him something important that he does not already know. Of course, Will and Mateo both have some secrets that could easily threaten their relationship. But the threat comes as Will’s sister arrives at their door unexpectedly. Will had assured Mateo that he was “out” to his family. He isn’t.

The sisters reaction is predictably closed minded. She instantly demands that Mateo leave her brother alone, and that Will himself simply must get immediate help. “It’s not normal! It’s not normal, you need help,” she accuses. Will may not be out, but he is having none of it. He begs her to leave, and she eventually does, though she comes back hours later to repeat the same mindless tirade again, though this time for an audience. Mateo explains that her help is not needed here, and orders her to get off of HIS property. She skulks away, leading to one of the most beautiful sequences of the movie where each of Will’s friends gives him a hug.

And what an assortment of delightful, sometimes annoying, sometimes hilarious, people they are. Almost always upbeat, his hard drinking friends are nothing alike, but except for one bloody nose to a Log Cabin Republican, nobody is bloodied by the verbal jousting.

Things almost come apart when a promiscuous trainer from the gym arrives. He has known each individually and now puts the two lovers together for the first time.

Throughout the film there a series of personal videos capture the thoughts of all the guests about the birthday boy. Each guest gets to whack at a giant piñata. There’s also the comic relief in the form of little sexual confessions while waiting for the bathroom.

Turtle Hill is a birthday cake of a movie, filled with the texture of LGBT life and layered with simple meanings that we all experience. Except those poor bible folks who will see living a full and happy life as the work of satan.

Larry Murray is a member of the Gay and Lesbian Entertainment Critics Association which votes on the Dorian Awards each year. This film is under consideration for the 2013 nominations.