Painting a picture of her life, Grandma Moses takes to the stage in Bennington, VT 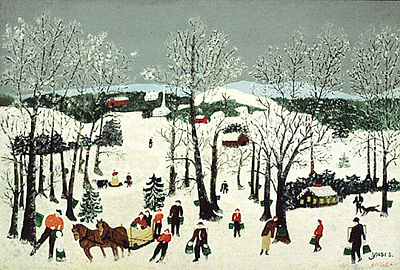 Painting a picture of her life, Grandma Moses takes to the stage in Bennington, VT

Larry Murray: Grandma Moses can be considered the ultimate poster child for Yankee ingenuity and thrift. “If I didn’t start painting, I would have raised chickens,” she remarked, and it was only when her arthritis got so bad that she could no longer embroider that she took up painting. She was 75. She had given birth to ten children, was a farmer’s wife until she was widowed, and made a little money churning butter, selling home-made potato chips and home canned fruits both in Virginia at the start of her marriage, and in nearby Eagle Bridge, NY, where she became a well known bit of living Americana.

Gail M. Burns: Born in Greenwich, NY, in 1860, “Grandma” had a memory of the day Lincoln died. At the start of her marriage in 1887 she saw Virginia farmland that still couldn’t be tilled because of the bodies of the Civil War dead lying buried just below the topsoil. Her works were exhibited at MoMA and at Gimbels. She met several Presidents and one of her paintings is on permanent display at the White House. She was friends with Norman Rockwell and is featured in one of his works. Edward R, Murrow interviewed her on television and after she died in 1961, the character of Granny on The Beverly Hillbillies was named Daisy Moses in her honor. What a century she lived through!

Larry: The play by Stephen L. Pouliot begins at the beginning, the younger days of Anna Mary Robertson Moses, before she became the famous Grandma Moses we celebrate today. She never aimed to become a great artist, nor to create 3800 paintings, some even done on Masonite. Lots of poor artists resort to Masonite since it is cheaper than canvas. But she went even further. Early on she used house paint and crude brushes, sticks, and common pins to fill in the details. “The pins are great for adding little eyes,” she points out. She had no professional training, and when encountering a problem would solve it the Yankee way, with thrift and resourcefulness.

Gail: She was very good at all the “womanly arts” required of a farmer’s wife of her time. While she was never rich, neither her birth family nor the family she and Thomas Salmon Moses built together ever wanted for much. They were hard working and self-sufficient. Her paintings take us back to that time when people could do for themselves or barter the fruits of their labor for skills they lacked. Moses’ artwork often depicts communal scenes of people collaborating or celebrating.

Larry: As a play, Pouliot has done a workmanlike job of making sure we get to all the details of her life, both commonplace and original. She was made of tough, if naive stuff, and only reluctantly began to use real oil paints and brushes provided by Dr. Otto Kaillir, her Austrian gallerist. Moses was ingenuous in her life and ingenious in her work.

For the play’s two acts we meet a younger Anna Mary Robertson in the first act, who becomes the Grandma Moses of the second half.

Gail: You can tell that I am a fan of Moses, and am always excited when the stories of strong women are brought to the stage. “Grandma” is a local heroine and many of her descendants still live in the area. But Pouliot has wasted a golden opportunity by writing a drably predictable script. And at the matinee we attended the production values were way below the professional standards Oldcastle claims.

Larry: Playing all the men in the play, Peter Langstaff had to assume eight different characters – and do some pretty fast costume changing in the process. But here director Eric Peterson didn’t see the need to make the distinctions idiot-proof for the audience by employing all the theatrical devices often used for this task. Sure a different hat and jacket help, but wigs, more vividly colored costumes and a far greater range of characterization in postures, facial tics and perhaps a mustache might have helped more. Langstaff also had a bit of a problem remembering which voice he was using at times, and some of his lines were unsure in their delivery.

Gail: As “Grandma”, Christine Decker occasionally forgot whether she was addressing husband, father, brother, or agent and used the wrong name, which didn’t help.

Both Langstaff and Decker have personal connections to Moses. Decker was raised in Cambridge, New York, with a grandfather who was a dairy farmer in Eagle Bridge. Her mother, artist Joyce Decker, met “Grandma” on several occasions. Langstaff’s grandmother, Helen C. Beers, a well-known still life painter, was a close friend of “Grandma,” and they used to paint together. Langstaff recalls meeting Grandma Moses at least once, at his grandmother’s house when he was three. He remembers her as “very sweet” and “the wrinkliest person I had ever seen.”

Larry: Overall, however, the inspirational life of Grandma Moses, which is the main reason to see this play, is well told and absorbing. Towards the end of the tale she is painting “Sugaring Time” a popular theme for her work. “There I am, in a red dress,” she tells Dr. Kaillir matter-of-factly, having explained earlier in the play that she always wanted a red dress as a little girl, but had to settle for a rusty brown because her mother didn’t approve. From someone who started out selling her paiintings for $2 (small size) and $3 (large) at a local drugstore to fame and fortune in the art world is quite a story. Forty three years later, In 2004, one of her paintings sold for $1.2 million dollars. It was “Sugaring Off,” painted in 1955 which she talks about, with pride, in the play.

She died at the wonderful age of 101 on December 13, 1961. She was survived by nine grandchildren and more than thirty great-grandchildren.

Gail: Before the performance began, director Eric Peterson announced that one of the descendants of Grandma Moses – Ken Gottry – will be at the Oldcastle Theatre this Sunday, November 10, at 1:30pm.. He will take part in a discussion before the matinee performance at 2:00 pm.

Another interesting wrinkle is that if you go to see both Grandma Moses: An American Primitive at Oldcastle and her work at the Bennington Museum www.benningtonmuseum.org , which houses the largest public collection of her work including “yarn paintings” and the 18th century tilt-top table Moses used as her easel, you save $5 off the theatre ticket price and $2 off the Museum admission price. Save your receipt from either the theatre or the museum, and show it either to the box office or the admission desk at the museum. This offer will only be honored during the run of the play, November 1-17, 2013.

“I look back on my life like a good day’s work, it was done and I feel satisfied with it. I was happy and contented, I knew nothing better and made the best out of what life offered. And life is what we make it, always has been, always will be.” –Grandma Moses