Mary (Mott) and Edith (Wharton) delight at the Unicorn Theatre 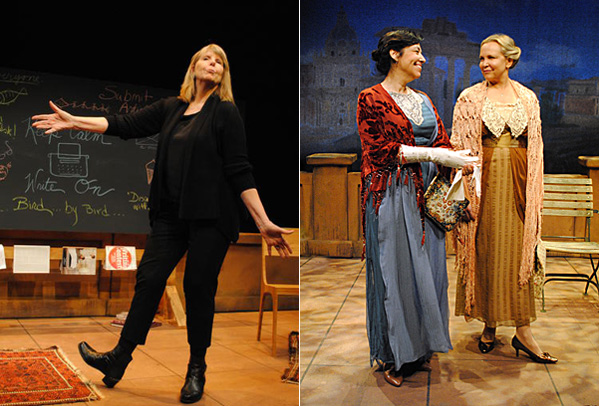 Mary (Mott) and Edith (Wharton) delight at the Unicorn Theatre

Mary and Edith at the Berkshire Theatre Group’s Unicorn Stage
Review and DIscussion by Gail M. Burns and Larry Murray

Gail M. Burns: The weekend began with the four gentlemen in the Oldcastle Theatre Company’s Sherlock Holmes – Knight’s Gambit. That was followed by three fascinating ladies on stage at the Berkshire Theatre Group’s (BTG) double-header Mary and Edith: Stories by Women a Century Apart. The contrast between the two was dramatic.

Larry Murray: Yes, and even though two of those ladies were of the same Edwardian ilk of the gentlemen, I enjoyed the women far more than the men. The title Mary and Edith made me think of Downton Abbey‘s Lady Mary and Lady Edith, though they would likely disagree as to the propriety of the Edith Wharton tale, Roman Fever which opens the evening at the BTG. Lady Edith of course had a remarkable feminist outlook for her day, and would no doubt love the final retort of the tale which ends the play.

Gail: Lady Sibyl was the true feminist of the Crawley girls, but I think all three sisters would have read and enjoyed Edith Wharton. Even the Dowager Duchess would have gotten a surreptitious kick out of Wharton’s genteel shocker.

Larry: Eric Hill has adapted Wharton’s popular short story, Roman Fever, into a half hour curtain raiser. Tara Franklin narrates, and Kate Maguire and Kim Taylor play Mrs. Delphin Slade (Alida) and Mrs. Horace Ansley (Grace) who find themselves back in Rome chaperoning their own daughters’ amorous adventures some 25 years after their own girlhood rivalry in the same locale. We see them chatting on a hotel terrace at dusk, overlooking the hills of Rome, suggested via a splendid set by Carl Sprague who also did the Sherlock Homes set. Busy guy!

Gail: I have no more trouble with the BTG adapting and staging Wharton than I did with Barrington Stage producing Shakespeare this summer even though both authors have long been the bailiwick of Shakespeare & Company. The only caveat is, they have to do it as well or better, or what’s the point? Sadly, Hill’s adaptation was not a patch on the vivid stage renderings of Dennis Krausnick, nor of the new adapters currently working for The Wharton Salon. I found the use of a narrator dragged down the plot and prevented us from getting to know Mrs. Slade and Mrs. Ansley and their relationship. It is better when the actresses can show what is transpiring, rather than having a narrator tell.

Larry: I was quite excited to see Maguire and Taylor on stage together – the last time I saw Maguire acting was in The Glass Menagerie some years ago on that same stage. And to see Taylor in a setting where she was not competing with Christmas past, present and future was a refreshing change of pace.

Gail: Glass Menagerie was the last time I remember seeing Maguire on stage too, and I really enjoyed her Amanda Wingfield. I have not see Taylor before, and I have to say I was not overwhelmed by her performance here.

Larry: Though the Roman holiday was very understated and placed its emphasis on the literary aspects more than high drama, the other offering of the Mary and Edith pairing was far from reticent. The writer and performer, Mary Mott channeled her innermost thoughts and observations in a delightfully delicious and droll monologue entitled From Where I Sit. Playing herself, it was as if we were sitting in her home – which the set recreated beautifully – and she was regaling us with the story of her life.

Gail: Mott has a wonderful, infectious smile and laugh, and a way of telling her stories as if this is the first time she’s doing it. A a “woman of a certain age” I could really relate to a lot of what she was saying. Being a “good girl” is not the most rewarding way to go through life. Breaking some rules is necessary and healthy!

Larry: Mary Mott is a marvelous dramatic monologist and raconteur, each story building on the previous one, and adding up to a life that has certainly been well lived. What her anecdotes reveal is that even when she was in the midst of mind-numbing conformity, she was fully attentive and aware of her situation and constantly finding a way to express herself even as others were judging her. In some of her more original moments – as when she was dressed as Bozo the clown at a costume party where everyone else chose glamorous flapper outfits – she had far more humor and originality than her peers. That’s a sign of a life well lived: with fun, humor, and yes, even a little embarrassment. As the old saying goes, show me someone who has never made a mistake and I will show you someone who never tried to do something really original.

Gail: Well you know that I am right there with her on the swimming issue. Too many women, and I suspect some men too, forgo the pleasures of swimming because they feel they don’t look good in a bathing suit. Women roast poolside in mumus while their children and grandchildren frolic in pools and ponds….What are we covering up and who are we “protecting”? Throw off the sarong and take the plunge!

Larry: For an hour, Mary Mott kept me entranced and involved in her life and loves. We have all been the target of endless monologues from people who live boring lives, but Mary Mott follows in a great tradition of story telling women. It’s not just Mark Twain, Mike Daisey and Spalding Grey who popularized the form. In the 1940’s three remarkable women practiced the art of the diseuse — Ruth Draper, Cornelia Otis Skinner, and Joyce Grenfell. Whoopi Goldberg still does her monologue now and then, one that pushes the envelope of the form.

The difference is that Wharton was writing fiction, while Mary Mott draws from real life, and that makes it both real and touching.

Gail: I could have happily skipped Roman Fever and spent the extra half-hour enjoying the beautiful Berkshire autumn. But I wouldn’t have missed Mary Mott for the world.