DVD Review: (Kristina) Wong Flew Over the Cuckoo’s Nest – A comedy about depression 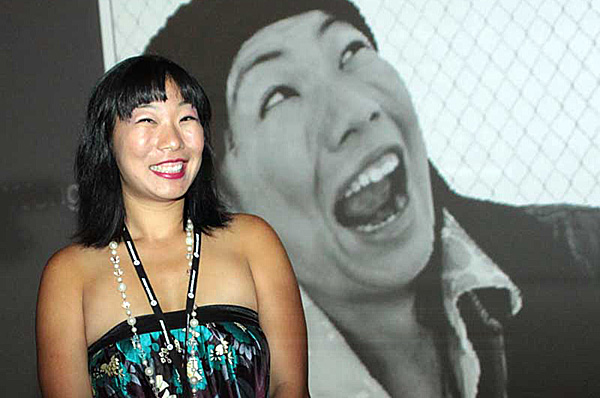 DVD Review: (Kristina) Wong Flew Over the Cuckoo’s Nest – A comedy about depression

Kristina Wong is an solo performer, writer and cultural commentator of the sort you often encounter at fringe festivals, and she is no stranger to the stage. She’s created five solo shows that have been seen at places like the Edinburgh Fringe Festival, The Public Theater, La MaMa ETC as well as the more traditional Comedy Central Stage.

Wong Flew Over the Cuckoo’s Nest is by far her most successful performance piece, and has been captured on a DVD recently released by Cinema Libre. Like any experimental theatre piece, it breaks new ground theatrically while also serving as an introduction to some trubling information, the high rates of depression and suicide among Asian American women.

An addictive knitter, now in remission, she surrounds herself with unfinished knitting projects from dozens of friends – and strangers – and with the aid of projected visuals begins the task of explaining what it is like for an Asian woman to make her way in an world full of absurdities. Her performance includes explaining the story-telling arc from exposition to resolution, but for more than an hour she is brought back to the reality that life just doesn’t work that way.

Having already made several forays into her audience to make her point, she finally enlists them in finding a resolution to the crisis of depression and mental health issues that are so often swept under the rug. Wong’s way is not to solve problems, but to open people to their reality and start the dialogue that could lead to its resolution. Many in the audience seemed to find much of her struggle funny, perhaps the younger members who laughed at the absurdity of the conventional and superficial understanding most people have towards depression. For those of us more familiar with the reticence most people have talking about it, the monologue rang true, and touched all the right nerves. In this quest her guests in the audience became more than observers, but participants in Wong’s guerilla theatre.

The DVD is clearly a low budget production, yet the excellence of the cinematography in capturing the details of the performance is superb. You never lose sight of the fact that the story is taking place on a stage, yet the close-ups bring us directly into the world of Kristina Wong as she wrestles with her demons to both understand and control them, and what happens when you don’t.

Wong Flew Over the Cuckoos Nest takes us places that a filmed performance rarely does, it finds comedy in the midst of depresson.