Minimalist, existential “I Am the Wind” a satisfying theatrical journey at New York’s 59E59 Theater 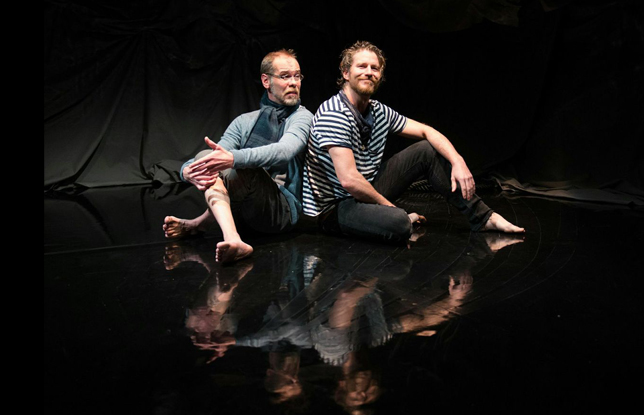 Minimalist, existential “I Am the Wind” a satisfying theatrical journey at New York’s 59E59 Theater

Over at the 59E59 Theaters they have been making a habit of delivering a range of thought provoking, modern plays, and in Jon Fosse’s I Am The Wind they have found another winner. The play opens on a minimalist set consisting of  some drab hanging sheets and a coiled rope  that suggest a boat while  we hear waves crashing softly in the background.

Complementing the stark stage setting are its characters, neither of whom is named or extensively detailed. Their relationship to one another is unexplored and they are simply known as ‘The One’ and ‘The Other’. They embark on what seems at first to be an innocent boating trip but which quickly takes a darker turn as they begin to discuss people, life, and the words we choose to use in relation to the things we feel and experience. The two characters are played by Christopher Tierney (The One), in his first New York City appearance since leaving Spiderman:Turn Off the Dark, and Louis Butelli (The Other) of Cyclops: A Rock Opera and Sleep No More.

Throughout the play The One struggles to communicate his thoughts. But he finds that his relationship to the world, other people and his own inner turmoil is far from easy to put into words. Over and over again he tries to explain himself and his feelings only to retract the explanation when The Other repeats his assertions. As this continues, you get the distinct feeling that The One is struggling under some sort of deep depression. In fact, at several points he tries to explain himself as a heavy, immovable weight or a crumbling wall, and that the simple effort of explaining himself, of even producing a single word, is a herculean effort. As the two continue on their seaward journey the sea seems to mimic The One’s growing distress, morphing from a pleasant and inviting calm into a turbulent storm.

Under the direction of Paul Takacs, the consistent minimalism of everything from the set to the actions of the players produces a feeling very reminiscent of a contemporary existentialist piece. This is reinforced by the playwright since there is no seeming direction or arc to the plot except as it is carried out by the friend’s conversation. In I Am the Wind, you are left with an ending that may as well have been the beginning. Although they do a fair bit of moving around the tiny stage, Tierney and Butelli do an excellent job of maintaining a very confined and simplistic sense of space, as if they truly are confined to the small area of a vessel. While it certainly may not be everyone’s cup of tea, I Am The Wind provides a satisfying exploration of the state of depression and suicide. The insight it offers into the inability to adequately explain the abstract notion of feeling – or the absence thereof – leaves the viewer with a goodly amount of thinking to do as they exit the theatre.