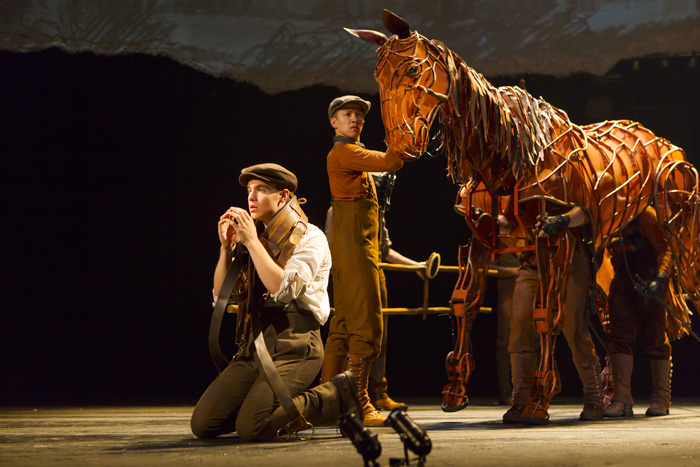 Joey as a foal.

The ominous moment before the battle begins.

War Horse gallops into Proctors – you should too
by Gail M. Burns and Larry Murray

Larry Murray: The morning after seeing War Horse, I am still awestruck. To take a simple story of a boy and his horse and turn it into the sweeping spectacle now on the stage of Proctor’s in Schenectady is nothing short of brilliant. It’s there until Sunday, and perhaps both the first and last chance for people in this region to see what first class theatre is all about. They can read the book, or see the Spielberg movie, of course, but neither can duplicate what we saw on stage.

Gail M.Burns: I think many more people are familiar with the book and the film, and its is our duty and pleasure to tell them that this stage version exists. It swept the 2011 Tony Awards, where host Neil Patrick Harris made a grand entrance riding on Joey, the horse puppet which is the “star” of the show.

Larry: Set in the days leading up to the Great War, the tale itself is set in a small English town where a struggling farming family ends up with the thoroughbred hunter colt Joey, bought by the cowardly and drunken father at auction for more money than they could ever afford. The job of raising the young steed falls to Albert, the son, who has that special sort of gift that enables him to understand and communicate with the spirited animal. When finances dictate that Joey has to become a draft horse, pulling a plow, Albert manages to turn his racehorse into a workhorse.

The author of War Horse, Michael Morpurgo found the inspiration for this story during a visit to a farm in which he happened on a boy talking to his horse in a confident and serious voice, and he had “the strong impression that the horse was listening and understanding, too. It was the inspirational moment that gave me the confidence to write War Horse.”

Gail: In the book the story is told from Joey’s point of view. No one wants a talking horse on stage or screen, so adapter Nick Stafford had to find a way to tell the story and keep Joey in the center without allowing him to speak. The answer came when he teamed up with the South Africa based Handspring Puppet Company who created astounding puppets that completely overshadow the humans in the story. This is wonderful visually and a drawback dramatically. The story is very, very simple – boy gets horse, boy loses horse, boy finds horse. The scenes with dialogue between the humans are static and soporific, then as soon as a puppet appears – and there are many, from an delightfully egotistical farmyard goose to an army tank – the action picks up again.

Larry: This production of War Horse doesn’t skimp on either the cast nor the special effects which made it such a huge hit at Lincoln Center, from which this touring show originates. In the way the production unfolds there are cinematic effects employed as well as several cutting edge theatrical ones. The use of both live and recorded music, live and recorded sound effects and the constantly changing projections on the cloud-like scroll above the playing area enabled the story to unfold seamlessly, often letting our eyes absorb much of the detail through images rather than words. Not that there wasn’t an intricate plot and key dialogue to follow as well.

Gail: And that brings up the weakness in this production. It is often hard to hear the heavily miked actors, and a variety of different British accents, as well as French and German, are used. War is inevitably a chaotic and cacophonous affair, and what with bombs bursting, horses neighing, cannon and tanks rumbling, it is hard to tell who is who and what is happening sometimes. Proctor’s is a big house, so only the very front of the orchestra can see the actors’ faces clearly.

Larry: Creating the illusion of Joey and the other horses is perhaps the indelible mark of this production. Crafted of cane, leather and fabric on an aluminum frame, the replica horses were larger than life, and designed so the actors could mount and ride them.

Gail: The horses are clearly the stars of this show. At the curtain call the horse puppeteers took their bows without their puppets, and received a hearty ovation, but when they reentered with them, to allow the audience to acknowledge “the horses,” the crowd went wild. Each horse puppet takes a minimum of three people to operate, and while to a certain extent you forget that the puppeteers are there, part of the fun is watching how the effects are accomplished. They wisely decided to have the puppets’ ears and tails be mobile and expressive, rather than their eyes or lips, because that is how horse’s communicate with humans. The ears did it for me. If the ears hadn’t been so mobile I wouldn’t have believed for one second that these were real horses.

But it bothered me that, while there were many many people on stage, not to mention behind the scenes, making this wonderful stage magic, the actors and even the puppeteers were treated very much as nameless cogs in the wheel. The only accurate cast list for any given performance is posted on a board outside the theatre. Our programs list names beside roles, but without taking the time to cross reference each name with those on the board, we cannot be sure who we saw, hence no reference to individuals in this review.

Larry: During the many war scenes when the cavalry was charging, the machine guns firing and the artillery shells exploding the effects became somewhat surrealistic, and yet the horror of those moments registered viscerally. I even found myself wiping away a tear or two, a rare occurrence for a jaded, hardened critic like me. Were there moments that reached out and touched you as well, Gail?

Gail: While this is a great family show in many respects, it is a show about war, and war is cruel and loud and terrifying and merciless. Horses and men die on stage, some in spectacular ways. I saw parents carrying sobbing toddlers out of the theatre. Even if your children routinely watch violent films and play shoot-em-up video games, the experience of a live stage show is very different.

That being said, I also saw lots of equine enthusiasts, mostly girls and women, who really loved this show. While I was never “horse crazy” I certainly had friends who were and I spent a good deal of time riding and being around horses as a girl, and I completely understand the deep emotional attachment. If there is a horse-crazy youngster in your life, or if you were one once, you really want to see War Horse.

Larry: World War I was the last time horses and cavalry factored into battle plans as the recently invented tanks and barbed wire rendered them helpless, while the use of machine guns and gas made war an industrial operation rather than a one-to-one combat exercise. While War Horse is not some sort of anti-war polemic, far from it, in the end it does leave a lingering aversion to mankind’s least original solution to problems.

Gail: Well what do animals know or understand about such bloody human conflict? Having the innocent Joey, who speaks no language and takes no sides, at the center of the story allows us to take a wider and more dispassionate look at the horror and pointlessness of it all. Towards the end of the show a fellow soldier follows Albert blindly because he believes he knows what he’s doing, when in fact no one knows.

Larry: The”live on stage” version of War Horse is a must-see – you can’t duplicate the depth and breadth that exists on stage at Proctors even on a Spielbergian movie screen. With buglers in the audience, soldiers in the orchestra pit, and action everywhere on stage, it is an experience that is not likely to be duplicated for a long, long time.

(This touring production will play The Bushnell in Hartford, CT from January 28 – February 2, 2014. The National Theatre’s production of War Horse, will be broadcast live from London’s West End to cinemas around the world on February 27, 2014.)