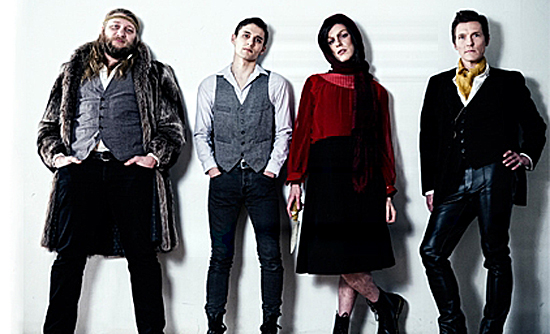 Vera; or, the Nihilists was Oscar Wilde’s first attempt at playwriting. The setting is totalitarian Russia, 1800. A tyrannical czar has stripped the people of their rights. He is using the poor working class’ labor to line his own pockets and those of his advisors.

A historical play, it turned out to be a largely unsuccessful venture, finding its way to New York for its premiere only to close just one week later. This production explores some creative choices that make us wonder why.

The titular character of Vera is part of a group of Nihilists who have sworn death upon the czar and ‘all men who wear crowns upon their heads.’ In its first New York City revival, undertaken by the Femme Fatale Theater group, she is played by drag performer and actor Chris Tyler in a conscious decision to ‘queer up’ the already campy production as a reaction to the widespread homophobia currently happening in Russia.

Vera has sworn to avenge her brother Dimitri, who was taken to the mines of Siberia for his Nihilist activities. Because of her craftiness Vera has now found herself the target of personal attention by the police who want to impose martial law until she is caught. They are unaware that the crafty Vera is within their midst already, gaining secret documents during court balls and attending meetings right in the heart of Moscow. They are plotting to assassinate the Czar. Oh, and the crown prince is also attending those meetings in disguise.

Vera and the Crown prince Alexis (Jake Lasser) have obvious feelings for each other, despite the Nihilists’ vow never to love, nor to be loved in return. This serves to ignite the jealousy of Michael (played by Michael Axelrod) who already distrusts Alexis as he has caught him spending nights in the palace. Just as it seems he may have convinced the other Nihilists that Alexis cannot be trusted their meeting is interrupted by General Kotemkin (Daniel DeStefano) of the royal guard. He accuses them of meeting in secret despite the law against it, and threatens to arrest them. The Nihilists claim they are simply a traveling group of players who were unaware of the law. Then in a twist in which he tries to redeem himself, Alexis reveals his true identity and sends the General away. This saves Vera from certain execution while earning back their trust.

Of particular delight are the scene changes between the acts. Here the lighting scheme focuses on the emcee-like Prince Paul who sets up the following scene as actors and crew prepare the stage behind him.

Wilde’s play offers contrasts. After the over-the-top and high energy of the Nihilists, the scenes in the palace are far more delicate. Here subtle glances and underplayed humor of the council scenes serve to draw in the audience. Of particular note is Prince Paul as he is played by John C. Hume, whose spot-on timing and enigmatic stage presence combines perfectly with Wilde’s writing. Alongside the comedic elements provided by the council members, these meetings are among the highlights of the show.

For example, Alexis enters and, sickened after having watched a group of Nihilists hung, opens a window, through which the Czar is later shot following a raucous scene as the Czar throws more unjust punishments at his people for supposed conspiracies. Alexis, no longer able to take the injustice, reveals that he himself is a Nihilist just before the fatal blow.

Alexis is crowned, and banishes his father’s corrupt advisers to France. Prince Paul however, instead of heeding the order to leave Russia, joins the Nihilists by convincing them that he shares their want of revenge against the crown. Thus they begin to plot the new Czar’s demise as Vera pleads with the other Nihilists not to trust a man who is so openly against the rights of the people.

Throughout the play we are led to believe that most of the Nihlists are, if not dumb, then certainly not smart, making judgements and decisions based on the smallest of facts while only Vera seems to weigh the consequences of these actions.

It’s unclear whether the over-acting that goes on is an attempt to highlight this but in the end, it certainly contributes to the illusion.

In farcical pieces it is the actors who determine whether the production is successful.

Leave out a hint or a glance and the audience is left wondering if they aren’t supposed to be taking the lines seriously.

Inject too much energy into your performance and you may pass from the realm of melodramatic camp into that state of gross overacting that is painful to watch.

It is difficult to get the balance right, to find the magic median in which both the audience and the players are in sync.

Vera; or, the Nihilists as performed by Femme Fatale Theater strikes a balance of all three in this forgotten gem of a Wilde play. It’s a shame it had such a short run. Femme Fatale Theatre has given us a very credible combination of queer, anarchy, and melodrama which could only have grown richer and deeper with more time on the boards.