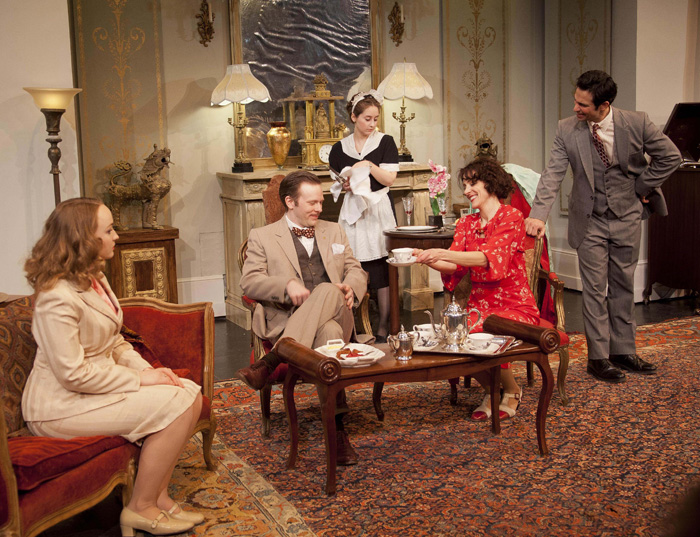 Roseann Cane: “Private Lives,” first presented in 1930, is probably revived more often than any play by Noël Coward. It has been subject of a myriad of literary analyses, many of which claim the play a reflection, or product of, Coward’s homosexual “world view.” Then, there are some who’ve declared Edward Albee’s “Who’s Afraid of Virginia Woolf” to be a play about homosexuality; various reports have Albee guffawing or expressing sheer exasperation in response. Of course, the works of these two masters are different as chalk and cheese, but I feel the need to emphasize the grave error we make when we assume sexual orientation trumps common humanity.

Gail M. Burns: During the 1920’s American women got the vote and ladies world-wide threw off their corsets and bobbed their hair in an unprecedented statement of physical freedom and autonomy. Here Coward makes Amanda (Dana Harrison) by far the more sexually aggressive character on the stage, and makes it clear that she neither regrets it nor finds her lifestyle unusual. Implicit in her “slatternly” ways is that she uses some form of birth control, because she is overtly unmaternal.

Roseann: Probably the frequent ‘Private Lives” revivals have more to do with the sophisticated silliness, the buoyant wit and wordplay, and the famous lines that are still amusing today, particularly those of Elyot (whom Coward originally played, and who is played by David Joseph in this production). “Don’t quibble, Sybil,” he responds to his new young wife early in the play. Later on, he declares, “Women should be struck regularly, like gongs.” And it IS funny, because we understand that Elyot is being superficial, and supercilious, too . There’s also the matter that he gets stricken as much as he strikes.

Gail: Today we are highly sensitive to the issue of domestic violence, but there are couples, like Elyot and Amanda, for whom physical altercations are part of the mating dance. The aggression is mutual. Amanda claims to be “covered in bruises” but there are no visible results from her rough and tumble session. At the end we see that Sibyl (Annie Considine) and Victor (Adam Huff) are similarly matched. The issue is controversial, but here we have to accept it as a part of the wide spectrum of human attraction.

Roseann: When Joseph made the latter remark, members of the audience gasped. Tony Simotes’s direction certainly underscored the humor of the remark. Joseph lounged tableside, playing with some knickknack. Problem is, Joseph, whose work I often admire, doesn’t seem to “get” Elyot, or perhaps he is miscast. His choices create problems. He’d already shouted the “Don’t quibble” line so loudly, angrily, and unclearly that I doubt whether those unfamiliar with the dialogue had any idea of what he was saying. The haughty humor was completely lost.

Gail: Simotes has his cast play this as a farce, but I contend that it is not one. I found the slapstick physical comedy, of which Harrison and Joseph are both masters, at odds with Coward’s style and witty dialogue. These are people who fight primarily with words, not with actions, which makes the knock-down-drag-out scenes all the more shocking and hilarious.

Roseann: From the opening of the play, when Elyot entered the terrace of his honeymoon suite with his young Sibyl, his irritated detachment was palpable. He not only found her annoying, there wasn’t the teentsiest suggestion of sexual chemistry, or even affection. For the play to develop properly Elyot’s realization that his true love is his first wife Amanda shouldn’t happen until after he encounters her across the railing on the terrace of the honeymoon suite she is sharing with her new husband Victor. Joseph needed more fire, lots more. He seemed to mistake bombast for passion. When he held Amanda in his arms for the first time in five years, he hugged her fraternally instead of kissing her ardently. We need to see this couple as passionate in their lovemaking as they are in their fighting. (And what fighting! Simotes’s fight choreography was splendid, and Joseph and Harrison executed it hilariously.)

Gail: Simotes had Joseph play everything as broad comedy, which Coward is decidedly not.

Roseann: Considine is an appealing young woman. I wish her performance had more variation. I also wish costume designer Govane Lohbauer had dressed her differently; to my eyes her outfits were matronly, and not well made. The dress she wore in the opening scene was not pressed properly, and a seam appeared to be torn or badly sewn.

Gail: I too noticed the seams on Considine’s first outfit, and I agree that Lohbauer, whose work I have admired for years, here mistook virginal for matronly. Sibyl needs to look younger and far less sexual and worldly than Amanda, but she shouldn’t look frumpy.

Roseann: I’m sorry to report Lohbauer didn’t do much better with the other costumes. Harrison wore striking, vibrantly colored garments, but, as with Considine’s the fabric appeared synthetic. The Bernstein is a relatively intimate theater, a good choice for this play, but when the audience is up close and personal, these details matter a great deal.

Gail: Again, I agree, and I am surprised because Lohbauer usually executes handsome and detailed designs.

Roseann: The French maid, Louise, is a small gem of a role. Though Elizabeth “Lily” Cardaropoli has a good, strong stage presence, she lacked character development. She spoke French with a heavy American accent, and completely lacked the Gallic hauteur the role cries for. I sense Cardaropoli has lots of potential; I wonder if she could have used more guidance.

Gail: I have seen so much more made of this character with delightful silent turns and takes. If only Simotes had lavished on Louise the endless comic business he gave to the leading roles!

And why did Simotes use Irving Berlin music instead of the song Coward wrote for this show? Surely when you buy the rights to do Private Lives the rights to the song go with it, while the Berlin tunes would have had to be permitted, and paid for, separately.

Roseann: Patrick Brennan’s sets had a few problems in common with the costumes. They were very attractive (and nicely complemented by James Bilnoski’s lighting), but there were too many elements of sets and props that distracted. In the first act, Elyot and Amanda make several leaps over the railing that separates their terraces, and each time, a large flower-filled urn perched behind them shook precariously, underscoring the fact that it was plastic. From the Champagne bottles poured clear, still water. A large mirror in the second-act set was covered in something like rumpled foil. I understand why a real mirror would have been impossible to use, but this was a sorry solution.

Gail: I was bothered by the cumbersome gauze drapes on the two French doors that remained part of both the honeymoon balcony set and the flat in Paris design. They blew inwards and outwards as the doors opened and closed the actors moved through them, and, although the players are by now expert in dealing with them, watching their well rehearsed coping maneuvers was distracting. As were Joseph and Harrison’s elaborate leaps over the railing. Again, this was an emphasis of physical comedy at the expense of both script and character.

Roseann: Well said, Gail. One of the hallmarks of Shakespeare and Company is the physical strength and grace of its actors. But the calisthenics had no place here. Unfortunately, the downfall of this production of “Private Lives” stems from a pronounced case of genre confusion.

Gail: Still there are laughs to be had and Lord knows we all need them as this long, hard winter winds down. If you are looking for an afternoon with Noel Coward you will be sorely disappointed, but if you’re seeking a few hours of fun you will be pleased.