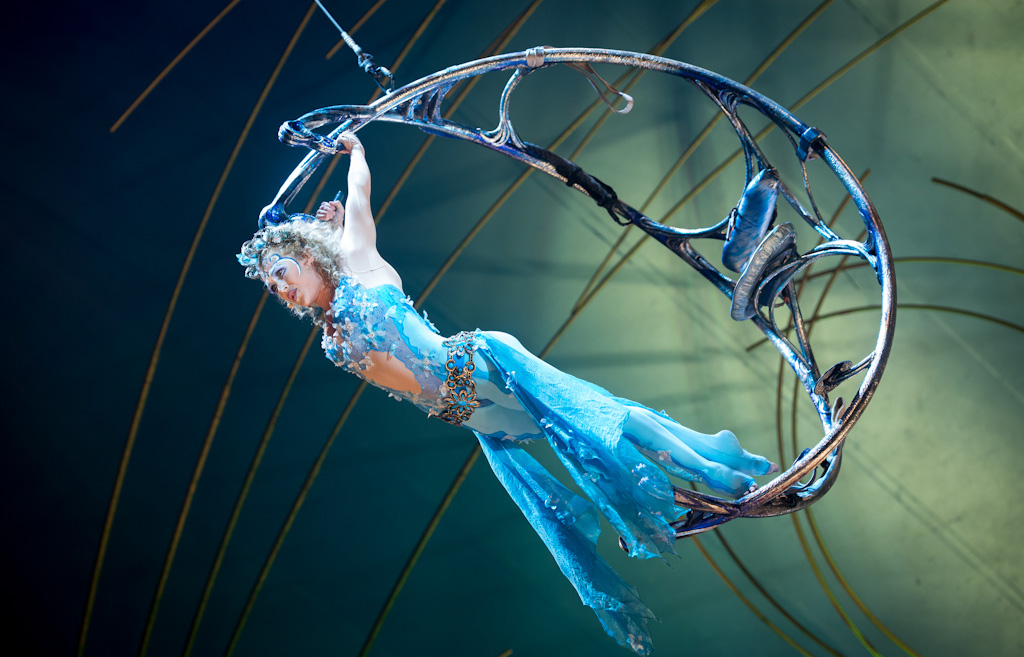 AmaLuna. An Amazonian Island. A storm created by Prospera. A love story that takes its participants through a host of trials before they can be together.

These are the core elements of Cirque Du Soleil’s latest production, AmaLuna. If those last two sound somewhat familiar, it’s because the production takes some of its inspiration from Shakespeare’s The Tempest – as well as a handful of other myths – turning them into an abstract and high-flying showcase of feminine power, strength, and grace. Offering stunning visuals of inventive and high color costumes, evocative sets, a high-power musical score, and lots and lots of aerial stunts, AmaLuna hopes to distract the audience from the fact that its plot and planning is shaky at best.

It’s not uncommon for Cirque Du Soleil shows to lack a detailed storyline – it is, after all, mostly a circus show – but combined with lackluster organization it makes the two and a half hour show seem much longer. Luckily for Cirque Du Soleil, it would be the rare customer who attends their performances for the plot, and they’ve got (just) enough talent and acrobatics to keep the crowd entertained.

After a so-so preshow in which the reptilian Calipur (Viktor Kee) plays and interacts with the audience, AmaLuna starts off fast with an engaging performance by a troupe of tumblers in an act called ‘Icarian Water Games.’ Using each others’ bodies to vault off of in ever more impressive acrobatics, they spin meteor hammers – two glowing orbs attached by rope – in various tricks that are entertaining and as good an opening act as an audience can hope for. The incredible energy put off by these performers is welcoming and exciting, particularly at the finale when one of the tumblers is spun faster and faster in the air in much the same manner that she had been twirling her meteor hammers just seconds before. The show continues on as the all-female band – a first for a Cirque show – rocks out, including an electric cello solo by Prospera (the multi-talented Julie McInnes) while she summons the storm that brings Romeo (Evgeny Kurkin) and his shipmates to their island. They are quickly captured, but between Romeo and Prospera’s daughter Miranda, (Iuliia Mykhailova) the damage has been done. They are madly in love. With impressive feats including aerial stunts (a lot of aerial stunts) and a ballet-inspired dance by Amara DeFilippo in the Peacock Dance, the first act is full of quasi-enchanting acts as Miranda and Romeo struggle to get to know each other and learn about love itself. With all of this action though it is surprising how underwhelming the show seems at its core. Yes, the acts are good, but they’re not great – and there is very little structure to how the excitement builds and wanes. At the end of the act as Miranda gracefully plays – first accompanied by the Moon Goddess (Andreanne Nadeau) in her aerial stunts and then alone in and ontop of a pool of water – and as incredible as her body contortion is, it still feels underwhelming because there was no huge WOW number to come down from.

While the show itself contains an element of the lackluster, the costumes and musical score add immeasurable value. The set is decked in oppulent blues and greens to give the illusion of a wild island, and the casts’ intricate costumes are a feat in themselves. Of particular note are Calipur’s tail and the peacock dresses worn by the accompanying dancers to Amara DeFillipo’s number. The tail – a somehow mobile and seemingly prehensile tail, is weilded with pomp and style by Mr. Kee until he sheds it during his capture of Romeo in the second act. The dresses of the peacock girls expand to a full plummage that nearly dwarves the humans wearing them, dazzling with their sheer oppulance and size. Along with these costumes, the band provides an enticing score that is in turns haunting and electric as it suits the mood of the acts. Sometimes, the music itself is showcased as in the scene where Prospera plays her electric cello in a thunderous effect during her calling of the storm.

The second act is a bit better – at least there is an understandable movement to it, as the two lovers discover their love. Trouble is in the stars for them however. Romeo tries to find Miranda only to be captured by her ‘pet’ Calipur the lizard – who views Romeo as his rival for Miranda’s affections. First the amazonians perform in a threatening and fierce display of uneven bar spectacle, intimidating the captured sailors. The teeterboard acrobatics as Romeo’s shipmates attempt to escape their prison – yelling just as enthusiastically as their captors had in the act before – that immediately follow this are entertaining and high-energy as well. Seemingly having springs for legs, the men are almost too high energy as more than once they have so much momentum on their landing that they have to scramble to contain it. Still, their engagement of the crowd is vital after a somewhat disengaging first act and this double act of enthusiasm is a great way to start the second act.

There is plenty more high-flying in the two and a half hour show, but the undisputable show stopper is the balancing act in which a woman – the ‘Balance Goddess’ Lili Chao – slowly assembles a mobile of thirteen palm leaf ribs, each larger than the last. This incredible act of balance and precision has the entire audience quiet, watching intensely as the mobile grows ever larger until it finally dwarfs the artist as a free standing structure. She removes the smallest rib, and the structure comes crashing down just as gracefully as it was assembled, as the action begins again. The noteable but eventually predicatable Chinese pole climbing by Romeo is impressive, the audience holds their breath as he drops headlong from a great height, stopping just inches from the ground. This is the most common trick in his aresenal and by the end of his climb it has lost its marvel. Calipur reemerges and captures Romeo in a pool of water, juggling victoriously on top of the bowl in what may be one of the most underwhelming acts of the show. There is nothing overly appealing about the juggling act that is simply Mr. Kee juggling n increasing number of small balls. In an attempt to spice up an act they must know is not good enough, one of the balls is briefly lit on fire, but it is not enough to save the act. Miranda reappaers, defeating her pet with the help of the high-flying aerialist Valkyrie, rescuing Romeo, and the two can celebrate their love. And the audience can celebrate an entertaining evening of incredible feats and beautiful accompaniment in which they occasionally got an idea as to what all that tumbling was about.

AmaLuna performs in New York City (Citi Field, Flushing, NY) from March 20 to May 18 and then travels on to Boston Marine Industrial Park from May 29 to June 20, followed by Washington, DC (The Plateau at National Harbor) July 31 – August 24, 2014. Atlanta is also in the works. For more information and tickets go to www.cirquedusoleil.com