Crystal Skillman’s ‘Wild’ is a refreshingly contemporary play, with an electric climax 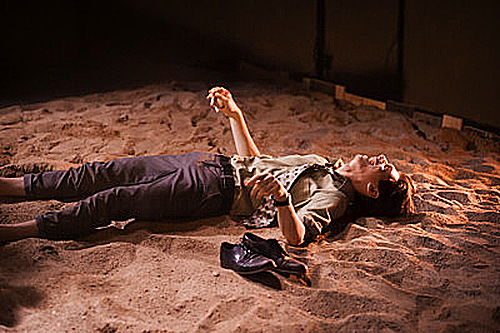 Crystal Skillman’s ‘Wild’ is a refreshingly contemporary play, with an electric climax

A sandy beach in Chicago bears witness to the struggles of a couple in the New York City premiere of Crystal Skillman’s new play Wild. The play follows Peter (played by Hunter Canning, who most recently appeared in War Horse and as Jack in the popular web series The Outs) and Bobby (Jeff Ronan – The Last Days of Judas Iscariot, Stunods) as they try to navigate the changing facets of their relationship – both with each other and with those around them. Having gone first to university and then to work for the same company, they have been in a committed relationship for five years – but that changes one night when Peter sleeps with someone else in a spontaneous act of desperation.

While at a bar one night Peter meets Nikki (played by Diana Stahl) – a girl out clubbing who hates club-going twenty-somethings who more than anything seeks to connect in the now. With drugs and alcohol coursing through their systems, the two engage in a passionate tryst on the beach. When Bobby overhears a voicemail from Nikki on Peter’s phone sometime later and learns about their affair, he becomes obsessed with the infidelity. Unable to let go of his feelings of betrayal, Bobby stalks Nikki, leaving jealousy laden and sometimes threatening voicemails on her answering machine. When this still does not assuage his hurt, he accepts the advances of a young and impulsive intern, Jordy (David Armanino) to try to even the playing field of their relationship in his eyes. Instead, the passionate and slightly naive Jordy quickly attaches to Bobby, slicing an even deeper rift between him and Peter who torments Jordy because of his feminine name and insists on calling him ‘Joe’ even before the affair starts.

As the two lovers grow further apart they start to form closer bonds with other people, who in turn become intertwined in the couples’ problems. Among these are Bobby’s brother Ted (Joshua Levine). Ted works as a nurse at a nearby hospital where Peter’s father is admitted for a serious illness. The problems between Bobby and Peter become evident to him when he has to tell his brother that Peter’s father is very sick, probably dying. Ted, who along with the rest of Bobby’s family is very supportive of his relationship, views Peter as another member of their family and urges Bobby not to push him away. This is in stark contrast to Peter’s own family who blame his coming out and subsequent gay relationships for his father’s decline in heatlh. A major supporting character, Ted is often the one striving to bridge a sometimes impossible seeming gap that spans between the two main characters as he also tries to plan his wedding. Mr. Levine’s earnest performance adds a sincere element to the play that is sometimes dominated by characters who represent shallower levels of emotion and understanding.

Vin (Lyonel Reneau) – an enchantingly open and beautiful man whom Peter meets while on his lunch break at the beach one afternoon, is one such a character. While he seems to be someone at peace with his emotions when we first meet him, we learn he actively avoids relationships in which he feels depended upon or constrained. This spells trouble for Peter who, denied the emotional relationship he craves with Bobby, starts to lean on Vin for physical and emotional satisfaction. Despite his insistance on keeping his distance, watching Reneau’s performance one cannot help but feel at peace, a mood he tries to instill in the frantic and lost Peter. However, when Peter admits that he has fallen in love with Vin, he knows it is time for them to part ways. Vin knows he is not looking for any kind of serious relationship. He and Nikki might make a good pair in that way.

Nikki meanwhile has had enough of the ‘crazy man stalking her answering machine because she slept with his boyfriend’ and arranges a meeting with Bobby. While it is tempting to take Nikki as a comedic character – her over the top personality and quippy dialogue lend themselves to someone who is not usually taken seriously – she is a serious part of the dialogue about the side of love that is impulsive and ‘wild.’ Although initially Bobby is on the offensive, he is able to put to rest the demons that had been haunting him concerning Nikki’s one-night stand with Peter, even coming to her defense later in the play against the words he himself had used to describe her before their meeting.

One more obstacle stands in their way before Peter and Bobby can truly start to heal though. Jordy wants Bobby to himself. He pleads with Bobby to leave Peter and be with him, but Bobby refuses, having finally forgiven and moved past Peter’s indiscrations. In a frantic display of emotions Jordy takes revenge against both Bobby and Peter that escalates into a threatening display of near-madness. Throughout the play Jordy has been shown to be a yo-yo of emotional instability, consisting of wholly youthful angst filled with hyperbolic emotions, but that does not make them any less able to be felt in Mr. Armanino’s exit performance. In the quiet that pervades when Bobby finally succeeds in sending Jordy away, the two original lovers are finally able to connect again.

In addition to a Crystal Skillman’s refreshingly contemporary script, this production also benefits from a wholly talented cast. Each of the actors have inhabited their characters deeply, reaching inside for what makes them tick, and then drawing it out in their performances. Of particular note in this skill are David Armanino and Lyonel Reneau. As Jordy, Mr. Armanino displays and incredible ability to transition within a spectrum of emotions naturally, particularly in his last scene as he brings the tension that has been building in Jordy throughout the play to a satisfingly electric climax. On the opposite end of the spectrum Lyonel Reneau’s Vin is played with such a calm and serene energy that even just watching him induces a feeling of calm. Even in anger, he retains his compsure and serenity so that it truly does feel like an integral part of his character.

Yet the real gift of this play is how candidly and openly it explores its characters in pursuit of these same ideals. Aside from a few of the character’s own perceptions, there is no shame in any of the relationships on display in Wild. From Nikki’s insistance on loving in the now and Vin’s steady and unwavering calm, to Peter and Bobby’s struggle to maintain a constant dialogue in their commited relationship, Wild runs the gamut of how different people identify love, and how fluid that love can feel to each of them. A funny and wholly contemporary look at how we search for the connections that make our lives meaningful, this successful combination of script, actors, and supporting technicians is a wonderful thing to watch in action.