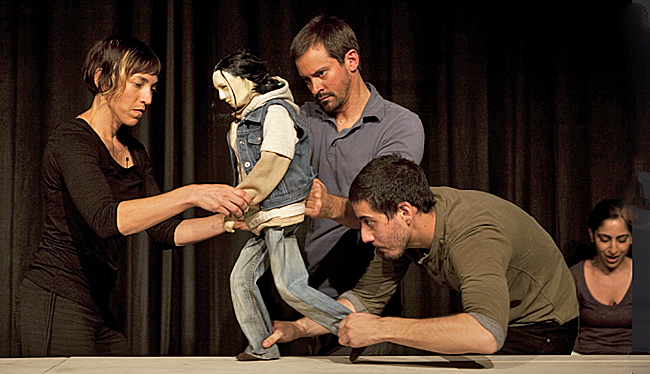 Taking the art of puppetry to new levels of expression
Review by Gail M. Burns and Larry Murray

Gail M. Burns: You took a little convincing to give up a Saturday afternoon for a puppet show, Larry.

Larry Murray: Yes, I was resistant, perhaps because I thought I had experienced just about everything the miniature world of puppetry could offer, but I was wrong.

Gail: If your idea of puppetry is still the hand puppets on Captain Kanagroo and Mister Rogers, the marionettes in The Sound of Music, or even the Muppets, be ready to be surprised! For one thing, these productions are not for little children, although tweens and teens with a theatrical bent will love them.

Larry: The thought that has stuck in my head is that this wasn’t the first puppet documentary I had seen. Mass MoCA brought in Dan Hurlin, who designed and directed this show, in 2010 with his sensational puppet biography of eccentric Arkansas photographer Mike Disfarmer. (Larry’s article) That too was “tabletop puppetry,” an advance on the art form that uses traditional techniques from Bunraku to shadow puppetry, and in this case, with two slow-motion Robert Wilson-esque sequences for model cars and accessories.

Gail: Hurlin is a genius, and so, obviously, is Los Angeles-based Dan Froot, the producer and writer of Who’s Hungry?, who we were also fortunate enough to see perform here in North Adams. They collaborated on this project from 2008-2012, which began as very region-specific pieces entitled Who’s Hungry?/West Hollywood and Who’s Hungry?/Santa Monica.

In planning for this weekend of performances Froot met with staff and volunteers from the Northern Berkshire Community Coalition, the Northern Berkshire Food Project, and the Northern Berkshire Interfaith Action Initiative to learn more about food insecurity in this area. But who ever would have guessed that they would be performing before a an audience feeling insecure about their lives and livelihoods within 24 hours of the closure of the city’s largest employer, North Adams Regional Hospital?

Larry: Yes, and it was all in the service of bringing attention to the mostly hidden problem of hunger in America. According to the program notes, all five of the interwoven characters have known food insecurity at one time or another in their lives. We see them at both the height of their successes in life, and at their most vulnerable and troubled. Did the stories of Chanel, Victoria, Cindy, Michael and Chris connect with you?

Gail: I felt that Chanel’s story was not told clearly at all. I would not have known what her real story was if there hadn’t been those bio blurbs in the program. (All five of the ‘Community Narrators’ whose stories are acted out are written up briefly.) Otherwise I found each story to be moving and engaging, and I loved how Froot and Hurlin had found a unique performance method to tell each individual’s saga. Although all these people have faced food insecurity, and more, the stories they tell are not specifically of their experience with hunger, but portraits of who they are – a florist, a producer, a mother, an addict, a surfer – portraits of their souls.

Larry: I connected most strongly with Cindy, who was the only character represented by a half life-sized puppet whose movements were so incredibly human I kept trying to figure out how the actors – who were right there, in front of us – were accomplishing the illusion while holding back tears because her plight was so familiar. (The video below shows the how, but with the lighting, music and acting, it became even more mesmerizing. As a substance abuser, her determination despite the size of her obstacles was a theatrical conflict whose resolution seemed impossible.

Gail: I loved the TV sitcom style in which Mike’s story was told with shadow puppets, and the marvelous ways in which the motion of the ocean was evoked in surfer Chris’s tale. And even though I didn’t understand the narrative, the way in which Chanel’s determined and epic journey by car from Atlanta, GA, to New York City to seek for family members immediately after 9/11/2001, was enacted was brilliant and thrilling to watch.

Larry: The production was greatly enhanced by the richness of the musical and sound design elements of Amy Denio, and the performances of Sheetal Gandhi and Sarah Jacobs, who are both dancers and choreographers, and the distaff half part of the four-person cast that jogged, flew and darted under, over, around, and on top of the 24 foot long dining table/stage.

Gail: I can’t fault any of the performers. Froot and Darius Mannino were wonderful too. Stage manager and lighting designer Julianna Rusakiewicz helped keep things moving at a fast clip and helped transform what is literally an empty storefront into an intimate performance space. And I thoroughly enjoyed the musical entertainment provided a local pianist before the curtain went up.

Larry: I do wish the company could have had a chance to settle into the Berkshires so that word could penetrate more deeply into the people who live here so that many more might have enjoyed such a talented and message-laden performance.

Gail: I am very disappointed in the poor publicity MCLA Presents! gave to this weekend of performances, which is just one of six stops on Who’s Hungry?‘s 2013-2014 New England tour (New Canaan and Middletown, Connecticut; Portland, Maine; and Martha’s Vineyard, Charlestown, and North Adams, Massachusetts.) That’s HUGE! This is a world-class theatre event in downtown North Adams with a top ticket price of $10! The college should have been rightly proud and involved the Coalition, the Interfaith Initiative, and the Food Project in community discussions and awareness/fund raising events surrounding this weekend.

Larry: In the introductory remarks it was mentioned that the arts management students did the promotion, which does not say much for their knowledge of basic marketing and promotion and awareness of the local media, including us.

Gail: However I am excited that MCLA and local puppeteer David Lane have transformed the storefront at 107 Main Street (just a few doors down from the Mohawk Theatre marquee) into a Puppet Lab. And that this is just one of several exciting, although again sorely under-publicized, puppet performances scheduled in the city. On April 14 at 7:30 pm the Puppet Lab will host The Pigeoning by Robin Frohardt, and the final installment of Lane’s Chronicles of Rose will be presented on May 1 at 6 pm. Let’s hope that these, and future Puppet Lab performances, are better promoted. There will be an audience for them.