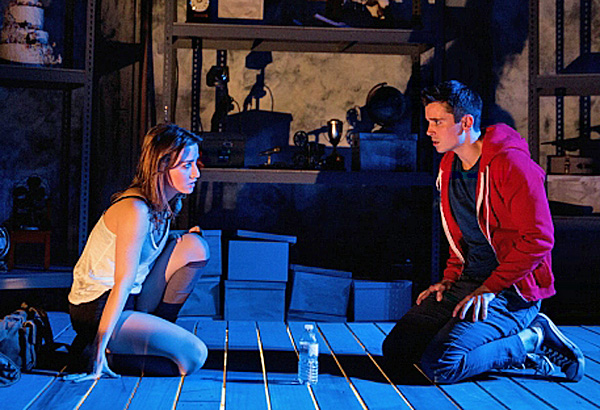 Jasper in Deadland is a new musical by Hunter Foster and Ryan Scott Oliver at the West End Theatre, now closed.

Every morning, Jasper (Matt Doyle) tries to escape the noise of the world – the constant chattering and texting and tweeting, by diving off a cliff that is near his house into the water below. His best friend Agnes (Allison Scagliotti) often accompanies him, but is always too afraid to take the jump herself. Jasper on the other hand looks forward to the jump and subsequent swim back to shore as one of the few moments of quiet.

Both are afraid of commitment, coming from troubled backgrounds in which – in the time honored ‘you’re the only one who gets me’ style – they find solace in each others company alone. When Agnes confesses that she is in love with him, Jasper pulls away, refusing to answer her texts or calls and withdrawing into the one comfort he has left – swimming. Recently kicked off the team for his involvement with Agnes, the quiet of the water is his only remaining solace.

He cannot hide forever though. In an effort to prove her devotion to him, Agnes has decided that she will jump off the cliff that has scared her for so long. She repeatedly calls and texts Jasper to accompany her, but he is still ignoring her calls. When a mutual friend tells him that someone saw her car at the cliff, Jasper becomes aware of the danger Agnes is in and rushes to her rescue. When he arrives at the cliff face, Agnes is nowhere to be found. Hearing her voice past the edge of the cliff, Jasper jumps off the cliff after her. But the water at the bottom is not what he is headed towards.

Tricky set useage and the creative use of a mirror makes for a fun ‘slide into the Underworld.’ (The main set consists of a single raised platform which throughout the play morphs, separates, and changes shape to bring us to the different parts of Deadland.) When Jasper awakes in a boat floating on the river Lethe, we meet the first of a host of charming Deadland characters, Lester (John–Michael Lyles). When Lester tells Jasper that he is in Deadland, Jasper tries to explain that he shouldn’t be here – that he isn’t dead. After all, all he did was jump off a cliff. Lester takes a shine to Jasper. He offers to pull some strings to help him search for Agnes, but it’s up to Jasper to get past the three headed dog. He and the Ferryman drop Jasper off at the gates to Deadland, where an existential Cerberus ponders the meaning of human existence while they sort through the newly dead. On discovering Jasper is really alive, they deduce eating him is the way to find out what human existence is all about. He is able to convince them otherwise by singing about the mindless toil and pointlessness of the life he observed in the living world. As they allow him to pass through, the three heads of Cerberus warn Jasper that if he stays too long in Deadland he will forget his own life and join the dead forever.

If Jasper was hoping for some peace and quiet in Deadland he is disappointed. As soon as he arrives in the City Circle of Deadland, a slimy looking Mr. Lethe (Ben Crawford) features in a commercial to sell water bottled from the river – named for Mr. Lethe himself. Given Jasper’s general impression of modern life, the audience might pick up that Mr. Lethe might not be the model citizen he appears to be, but before too much thought can be given to him we are introduced to another main character, Gretchen (Allison Scagliotti). Leading a guided tour of newly dead people, Jasper tries to enlist the thoroughly unamused Gretchen in his search for Agnes. When she declines he grabs her arm to try and stop her, triggering a flashback from her life before her death. Once it gets out to the public that the touch of the live boy can trigger memories of their past the previously content residents of deadland become frenzied over Jasper.

And as might have been guessed, Mr. Lethe is not happy about it. Fearing that Jasper’s popularity could jeopardize his monopoly over Deadland he sends the hilariously incompetent norse gods Loki and Hel to capture him. Played by F. Michael Haynie and Bonnie Milligan respectively (who like most of the cast also play a host of other characters) they trounce around the stage always a half step behind Jasper and Gretchen as they search for clues of Agnes’ whereabouts. After yet another dead end, Lester reappears with some bad news. He has found out that Agnes actually died jumping off the cliff, and is in Deadland rightfully. He also says that Mr. Lethe has offered to allow him to return to the world of the living since he has no reason to be in Deadland anymore. Jasper refuses, vowing that he will find Agnes and bring her back to life. This quest leads him and Gretchen on a trek through just about every myth known to man about the underworld, from the heart-eating monster Ammut and Dante to the lord Hades himself and his queen Persephone.

The sheer number of myths and tales put into one show makes it a bit difficult to keep track. The multitude of characters are played by five or so actors and actresses, but they and the radical costume changes keep everything as clear as it can be.

One aspect of the show itself that needed quite a bit of readjusting was the sound. While both the band and the actors were all very capable music makers the microphoning of everyone combined with resonant walls of a comparatively small room made it so that it was, at times, painful to listen. Commonly the level of noise created would drown out what that actors themselves were singing about, leaving the audience guessing what had transpired as they took their fingers out of their ears.

This is a pity since Allison Scagliotti – best known for her tv roles and now making her off-Broadway debut – showcased a particularly talented and lovely singing voice at the times when she wasn’t drowned out by the chorus members. In such a small theatre it probably would have been wiser and just as effective to have the cast perform un-amplified. It is unlikely they would have had any trouble being heard even with the band next to the stage.

For a play with so many moving parts, costume changes, musical numbers, and myths rolled into one, the script of Jasper in Deadland is surprisingly simple. And flat. It occasionally tries to hit on deeper topics such as our modern obsession with being connected, and the meaning of life, but at its heart this play is just a simple love tale. It relies heavily on the talent of the actors to be successful. Much of the appeal of the show is in the energy the multi-talented cast puts into their performances. Everyone pulls their weight and takes turns being the villainous bad guy, or the comical god-turned-mercenary or other characters, yet the cast manages to keep the audience entertained in what might otherwise be sort of like an evening at a skit comedy club. There’s not much meat on the bones of this script. That said though, as a simple and fun play with a super talented cast (and band), creative set useage (the set was designed by Patrick Rizzotti) and costumes for every occasion (we’ll let slide the somewhat disappointing three-headed dog) Jasper in Deadland fits the bill.