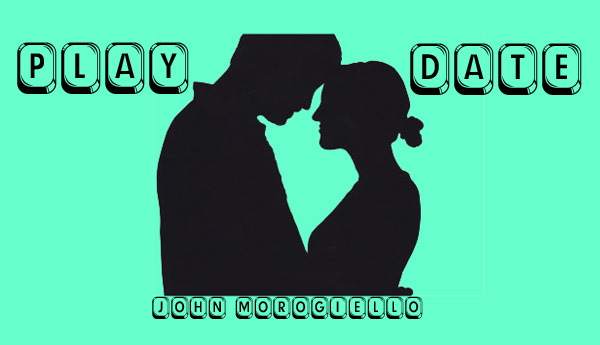 Larry Murray: In Play Date, when three couples decide to get to together with their children for some adult conversation while the young ones play, all seems normal enough. But from the moment the lights come up, the complications begin.

Gail M. Burns: You know, in my day a “play date” was called a cocktail party. They happened on Saturday evenings and the parents had drinks and snacks while we kids ran amok. The premise here is that the kids get the drinks and snacks (expressed breast milk and free-range organic chicken cubes) while the parents run amok!

Quick plot synopsis – Blaine’s political ambitions ruin his wife Missy’s plans to have a “play date” not only for their son but for herself as well with washed up actor/stay at home dad Trent, when he announces that he’s staying home to campaign amongst the mommies. Missy quickly invites the divorced Carol and the impossibly perfect Deb (an endorsement from whose husband is the aim of Blaine’s political ambitions) and their offspring to join in, while Blaine invites the widowed Rowan, a British professor of literature, and his daughter to complete the gender balance. The parents’ needs and desires mix and mingle to create comic chaos while the unseen children disport themselves as children will, despite Blaine’s efforts to entertain them with his campaign power point. By the generally happy ending many problems are resolved and lessons learned, by the grown-ups, not the kids.

Larry: This play – a world premiere by Dramatist’s Guild member John Morogiello – demands a great deal from its cast of two players, the solid Jim Staudt who alternates in the roles of Blaine, Trent and Rowan, and the impressive Sandy York whose Missy, Carol and Deb are simply unforgettable. It’s not an easy task to play three essential characters so that there is no audience confusion.

Gail: It isn’t, and there are lightning fast changes required here too. While costume designers Christine Decker and Kelsey Banulis have made the job easy on the actors, sound designer Cory Wheat hasn’t quite achieved the right quality for the recorded off-stage conversations that cover those changes. The times when characters are merely talking off stage sound too obviously canned, and times when we are hearing them via the baby monitor don’t sound canned enough.

Larry: What struck me as remarkable is that the performers each had juicy monologues in which to display their acting chops, while also being masters of the quick change when all hell breaks loose on stage.

Gail: No question that Staudt and York brought their best efforts to both the emotional and farcical aspects of Morogiello’s script. Whether Morogiello has attained a plausible balance between those two elements is another question. We both agreed that the acting and direction were superior to the script.

Larry: It’s classic farce, even with only three doors, with all the little deceits and lies being found out, and behind the doors the clothes must have been flying as those actors changed from one character to another in an instant.

Gail: Decker and Banulis have created comfortable base costumes for both actors. The changes of clothing were minimal, and even the three different hairstyles York sported were simple changes. I was glad no wigs were used. Instead she wore her ear-lobe-length hair loose as Missy, clipped back as Carol, and behind a headband as Deb.

Larry: While I thought the play was at times a strictly straw-hat-circuit sort of entertainment, it is the magic that the actors bring to it, and the carefully choreographed comic timing that makes it worth seeing. You don’t have to be a parent or spouse to appreciate the very human desires we all have underneath our perfect facades.

As a playwright, Morgiello didn’t so much bring new insights and situations to our attention as he mined the rich tradition of stock characters and put them in new setting with new clothes.

Gail: I liked the first world premiere by Morogiello that Oldcastle offered up – Engaging Shaw in 2006 – more than this one, but for a lightweight summer farce it has charm. (Engaging Shaw Review)

Larry: Eric Peterson once again shows us what a master of stage action he is, while giving his performers lots of latitude to be their creative best. Did you notice that there were no collisions during the chase scenes, and that the characterizations were all clearly wrought? Perhaps a couple of moments were a bit over the top, but this is farce after all.

Gail: I confess that even in extremely tightly staged productions of “…Irma Vep” I have never seen as hilarious and frenetic a chase scene with two actors in multiple roles. Kudos to director Eric Peterson, the cast, and the backstage crew for pulling it all together!

Larry: With so much that Oldcastle Theatre does right – their sets, costumes, lighting and sound are almost always near perfect, it is a continuing concern that they don’t seem to have any understanding that their marketing of this work is in need of the same attention to detail. The audience at the Saturday matinee we attended was sparse and that is a shame. With only one more weekend to see this show, it’s another “keeper” that deserves full houses and louder applause. So I will say it loud and clear: this is a show that has laughs, surprises and will connect with you. Go see it.

Gail: I am always sad that Oldcastle seems to care so little for developing the audience they could and should have. Their new space in the heart of downtown Bennington is accessible and inviting with comfy seats and good sight-lines, and they made good use of it this winter to host weekly concerts and family friendly productions by their educational theatre branch, Actors Express. Let’s hope that the reach of those programs will lure a few more folks into the seats for this worthy effort.