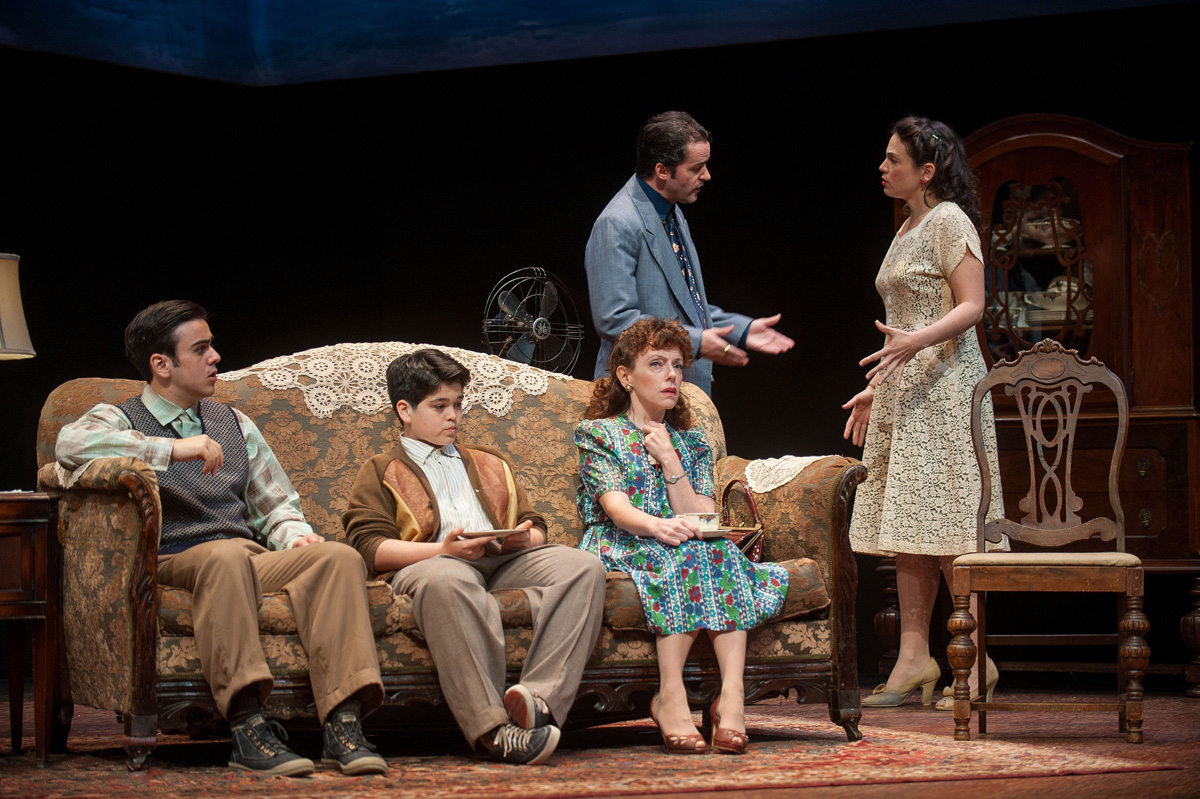 I expected Neil Simon to make me laugh,
but didn’t expect the deep drama as a bonus
Theatre review by Larry Murray

At Barrington Stage, the fresh new production of Lost in Yonkers is a contender for the summer’s best comedy. It’s a really funny show, especially the first act when we get to meet the characters. It is also in the race for the year’s best drama, as the second act unfolds with more gravitas than guffaws. It’s likely to be a hot ticket, too, since it is hitting the sweet spot with its audiences, as they find its human dimensions absolutely riveting.

Granted, it’s been a long time since just having Neil Simon’s name on the marquee was a gold plated guarantee of a hot ticket. Lost in Yonkers came well after Simon’s laugh-a-minute comedies The Odd Couple and Fools, and also much later than his autobiographical plays Brighton Beach Memoirs, Biloxi Blues, and Broadway Bound. If you watch the clip below, Neil Simon explains how Lost in Yonkers came from a completely different place, and how he felt guilty taking the Tony for best play away from John Guare’s Six Degrees of Separation.

Neil Simon was as surprised as anyone when he won the Tony for Best Play, and the Pulitzer Prize for Lost in Yonkers.


Lost in Yonkers was written in 1990 and is a testament to the fact that his work not only matured but also grew ever more deep and affecting. Of course there’s comedy, but there is deep emotion, too. Lost in Yonkers needs the ceaseless torrent of one-liners to counterbalance the family matriarch who had her heart ripped out half a lifetime ago. Her inability to generate any warmth – or even a pro forma hug – has stunted the emotional growth of her children and is in danger of infecting her grandchildren as well.

The story takes place during 1942-43 in an apartment above Kurnitz’s Kandy Store which is owned by Grandma Kurnitz. She is a cold fish, wonderfully played by Lynn Cohen as an emotional black hole. Her very presence is enough to suck the socks off the feet of anyone who gets too close to her spirit sucking orbit. The woman has lost two of her six children and a husband to early deaths. Cohen plays her with a stiffened spine, a stony face and a heavy accent. So heavy in fact, that her pronouncements are delivered in a Grotowski-esque style, curiously appropriate since her character is that of a German-Jewish tyrant. Incredibly ferocious one minute, and delivering the silent treatment the next, she seems to be trying to repel the only people left in her life, her family.

Unfortunately, that is exactly what happens when her financially troubled son Eddie (Dominic Comperatore) delivers his two young sons Jay (Matt Gumley) and Arty (Jake Giordano) to the old lady’s flat. They must stay with this tyrannical German grandmother as debt collectors chase their father into exile. Also living with them is 35 year old Bella (a brilliant Paula Jon DeRose) who is mentally and emotionally challenged, and has been keeping a secret romance going. Rounding out the dysfunctional flatmates is Uncle Louie (David Christopher Wells) Bella’s brother, and a small-time hoodlum in this old/new world place called Yonkers.

A patch of sky overhangs the stage, suggesting the small bit of sky that can be seen from the home, and overshadowing the sky are utility poles and wires suggesting a dense urban environment. Oddly, we never hear about – or from – the neighbors. Rounding out the cast is Stephanie Cozart as Aunt Gert whose trademark is the ability to talk whether she is breathing in or out.

While the two boys are ostensibly coming of age during their stay in this hostile environment, the surprise is in how it actually details the growing maturity of Bella. The Matriarch of the family may dominate the stage when she is present, yet DeRose manages to outshine her as she discovers – and then reveals – all that has been going on. All this while Grandma Kurnitz has been treating her like a helpless child. In this household, Cohen rules with an iron fist and does not let anyone change her attitude or judgements. In the play, each member of the family discovers that it is up to them to change themselves, there will be no help from the boss.

Directed by Jenn Thompson, the story resonates deeply since she keeps the focus on the characters, not the laughs. “People think Simon is the master of laughs, but behind the yuks are real people and their very real stories,” Thompson said at the BSC season announcement.

The production includes revisions to the original script suggested by Thompson and approved by the playwright that enhances the focus of the story on the children. And they are present almost constantly – with their lives revolving around the sleeper sofa sitting center stage throughout the performance. It’s the only place they can call their own, though in Act II even that is usurped. The key to the play is given early on when Jay tells Arty that all of the Kurnitz children – including their father – were damaged. As we learn, Grandma kept hitting Bella on her head with a cane. When Louie broke a cheap plate, his mother locked him in a closet for hours. Others suffered similar repercussions if they did anything wrong. Most of these stories were hardly unusual for the times. The Kurnitz family was not the only one lost in Yonkers.

With a tightened script for this production, worked out by director Jenn Thompson and Neil Simon himself, Lost in Yonkers returns to us as perhaps his strongest play, able to hold an audience in the palm of its collective hand as the Kurnitz family tells its story flawlessly at Barrington Stage Company. Hilarious and heartbreaking at the same time, it is not to be missed.