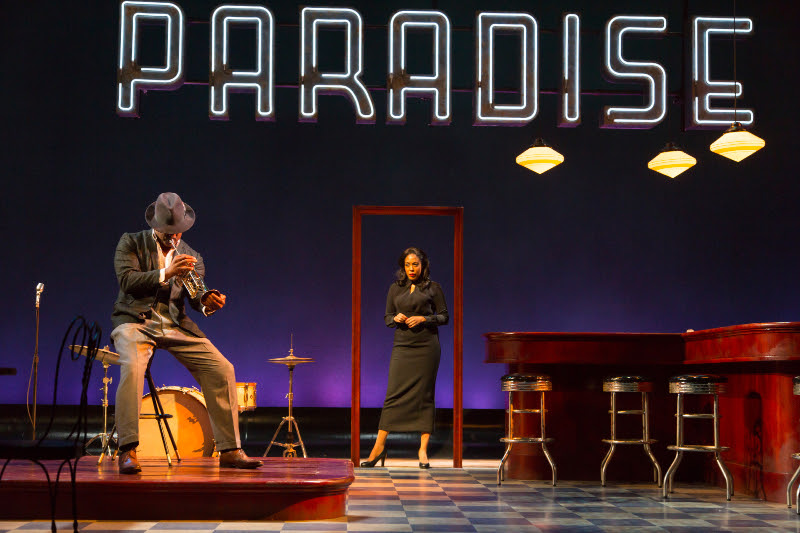 In Dominique Morisseau’s “Detroit Cycle” of three plays, it is the women who come most vividly to life, and in Paradise Blue, that is doubly true as Kristolyn Lloyd brings a sad sweetness to her character Pumpkin, while the scintillating De’Adre Aziza burns up the stage with her heat as Silver, an opportunistic spider lady whose charms are impossible to spurn. Unless you are Blue, a trumpet player whose high notes could shatter glass, and low moods suffocate both his sanity and humanity. The second play in Morisseau’s series takes us to the Paradise Valley jazz club in 1949 where we also meet Corn (Keith Randolph Smith) and P-Sam (Andre Holland) as Blue secretly plots to sell his club and accept a gig in Chicago where he will be a featured artist, not a back bench player.

According to the program notes, the first play in the cycle, Detroit ’67, was produced at the Public Theater in 2013, and looked at the explosive and unstable days of the 1967 riots/rebellion. Skeleton Crew, slated for a 2016 production at the Atlantic Theater Company, depicts four auto workers facing an uncertain future as the city edges toward the 2008 recession. In many ways it documents the difficulties of Motor City in the past and present, and offers a gloomy outlook on the future. Just as August Wilson’s plays give us a view into the inner life of Pittsburgh, so does Paradise Blue give us a taste of what life in Detroit might have been like for African Americans in the past.

The play makes some social and political points in that gritty Blackbottom – Paradise Valley was once a thriving Detroit neighborhood that, while poor, was viable and cohesive until urban renewal for housing and gentrification destroyed it little by little. Facing racism on a daily basis is about as soul sucking as it gets, but then to not be sure your business and home will survive into the future shatters the last remaining cohesiveness in lives that are barely surviving.

The WTF’s production of Paradise Blue reflects that uncertainty as even the set by Neil Patel has no walls, just the frames of doors and the suggestion of other boundaries, with living and working areas cleverly defined by the lighting. Some ill-timed sound effects served up knocking on doors, and though nobody could fault the performances of Blair Underwood as Blue or Keith Randolph Smith as Corn one could only wish that Blue was actually playing his trumpet and Corn the piano. I thought how much more interesting it would be if John Doyle – whose trademark is using actors who play instruments – this show could have been with live music.

This is not to say that director Ruben Santiago-Hudson did anything less than an exceptional job keeping the actors in motion, and constructing sequences and tableaus that are forever seared into my memory. No entrance (and exit, and entrance again) has ever been so provocative as that of De’Adre Aziza who as Silver had a sexy sashay across the stage that had not only the denizens of the Paradise agape, but the audience as well. Then, towards the end of the first act she comes on to Corn in one of the flat-out funniest bedroom scenes in recent memory. In the second act as Silver again reigned in the bedroom, as the rest of the cast in the club offered a counterpoint that was like watching two pas de deux taking place at the same time.

As Pumpkin, Kristolyn Lloyd introduced her character early on reading poetry as she swept up the barroom floor in a series of comic turns. It wasn’t long before we discovered that her bum wrist was not from this work, but from Blue who treated her very roughly, using rough physical domination to underscore his wishes. Despite the harsh treatment, Pumpkin remained true to her brute of a lover.

Not everything was perfect in the lives depicted on stage, nor in the production itself. Andre Holland as P-Sam often used conversational acting levels instead of projecting for much of his performance, which would have been great is this was an episode of Law and Order, but most of my friends had trouble making out what he was saying. When he was called upon to get angry he elevated his voice levels up to theatre levels. Blue similarly had his “authentic” pianissimo moments as well, which left many of us to read his face for clues as to what he was saying. Interestingly, both Silver and Pumpkin were always audible.

It also seems that some judicious pruning of the running time is also in order, especially in the first act whose expository and character building elements seemed excessive.

Quibbles aside, this is an important work of theatre, documenting (albeit fictional) the rise and fall of a key neighborhood in a city that has recently fallen on truly tough times. There was a rare moment of theatrical magic within the two hour drama (plus intermission) and that is when the simple Pumpkin, all dressed up, picked up the microphone and sang a simple song. Gorgeous. Heartfelt. In that moment all her troubles were swept away – along with ours – as only can happen when beauty replaces ugliness for a few minutes of glorious rapture.