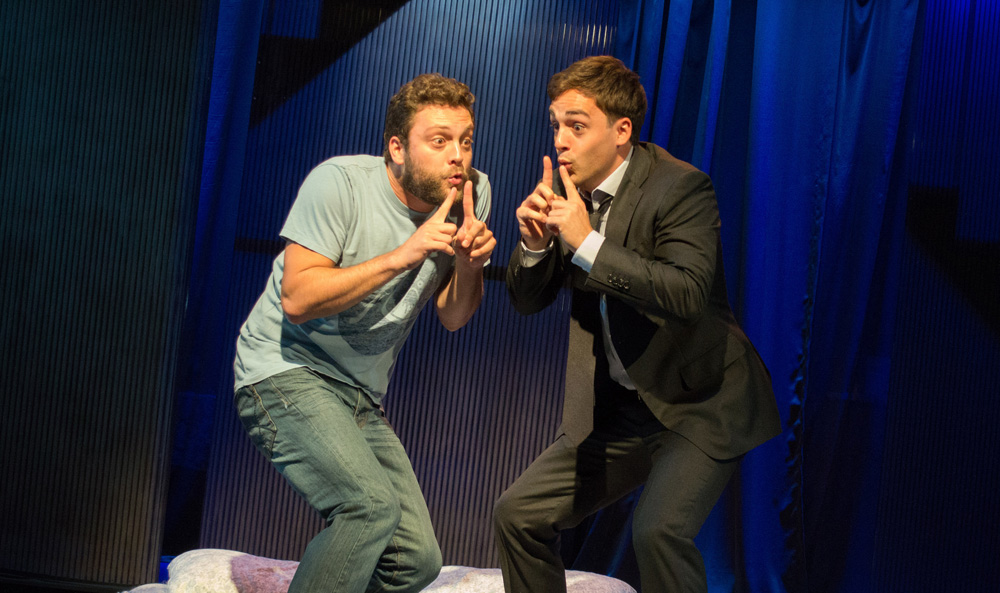 All photos by David Fertik

With book, music and lyrics by actor and writer Nick Blaemire, the latest project from William Finn’s Musical Theatre Lab (MTL) at Barrington Stage is more than just A Little Bit Alive, it is very much so. Blaemire created this story of a family bereaved and deceived pretty much on his own, a solitary creative process. Then his score and book reached the MTL and he found himself in the next stage of creation which is collaborating – and being supported – by a whole bunch of top notch theatre professionals, including the director, Tony nominee Sheryl Kaller (Next Fall, Mothers and Sons). For this production he also had the insights and talents of Lisa Shriver as choreographer, Vadim Feichtner as music director, with orchestrations by Charlie Rosen.

Together they have come close to completely reinventing the musical theatre form, and for the first ten minutes or so of Alive, I sat in total puzzlement as to what they were up to. Then it dawned on me. This is musical theatre, sure, but it is much more than that. Instead of pretty songs with repeated melody lines and salubrious lyrical sentiments, this is everyday speech, rhymed and coupled, and – oddly – it is far more like punchy operatic recitative with a rock beat than anything else. And it works.

Most musicals as you know tell a story during which the singers break into a song that is usually somehow related to the tale being told. They sing their sentiments and then come back to earth and move the dramatic tale a little further down the road before bursting again into song.

Blaemire’s slice-of-life musical revolves around two brothers who reunite following their mom’s funeral, and discover some unexpected truths about her. Or at least one brother comes to the realization that his brother kept her secret. He never spoke of it to his father or his sibling. They squabble about the younger brother’s secrecy until they both discover – to their horror – their dear old dad knew as well. Now in a musical there is usually love that is sung about, but in A Little More Alive, it is about confusion, betrayal, anger and hurt. There will be retribution!

But here’s the thing. Blaemire has been tinkering with the musical which only got “locked” into its current incarnation this past Wednesday as he added rewrites and new material that continue what appears to be the ultimate destiny of this work as a fully sung through musical. Even in its present form it is mostly sung, with half a dozen breaks for dramatic scenes. But mostly it is the characters singing their feelings, and every lyric advances the story and emotions with great efficiency, with the acted scenes very much in the rock and roll school of acting first developed at Chicago’s Steppenwolf Theatre, where the brother Nate (Van Hughes) and Jeremy (Michael Tacconi) don’t wag fingers at each other, but explosively go for each others throats when angry. And never, ever simply sit on the sofa, they leap, toss and throw themselves onto it, as they do the cache of letters they find which end up going airborne at least three times during the course of the show. With Gene, their Dad, (Daniel Jenkins) the familial trio of survivors are constantly bursting into excitement and song to reveal their feelings. The dramatic spoken scenes are the traditional accusations and reproaches – all surface stuff – while the songs express the internal turmoil and darker underside of each characters’ emotions.

In speaking briefly with Blaemire he confirmed that his characters had leitmotivs but not Wagnerian ones which are heard as melodic passages or phrase. Instead his characters had rhythmic signifiers, Nate and Jeremy each moving to a different beat. Fascinating stuff once you are on to it.

The production itself was a mini multi-media spectacle as family films unspooled against the walls of the house in which the family gathered, with Nate and Jeremy dredging up their memories and filling in some blanks in the process. The five piece back up band was upstage, behind a scrim-like curtain and always enhanced, never overwhelmed, the performers downstage. The various locations of the ambling story were created with the movement of the movable panels which – with the projected images could go from living room to lakeside woods in just seconds. The designers include Kris Stone who did the sets, Jeff Croiter the lights, and Caite Hevner Kemp the projections. And of course, the untold and uncredited souls who did all the hammering, painting and installing under the watchful direction of Jeff Roundabush.

Let us now heap praise on the actors. Channeling the gregarious, scruffy yet appealing Nate is Van Hughes. Nate who opens the show with a song and guitar riff on “Pot at a Funeral” which signaled the need to turn on the irony detector for the duration of the show. His younger brother Jeremy – played by Michael Tacconi – was button-down perfect as the little-guy-did-good, and his constant fussing with his cellphone signaled that he was only partially present for all that was transpiring on stage. It telegraphed just how much smartphone-addicted people are missing by not giving the present moment much attention. Tacconi’s song “I Remember it Differently” was delivered effectively, as was a duet the brothers sang, “Every Single Memory.”

As Gene, the lads father, Daniel Jenkins had a great solo in “House to Myself.” Closing out the show was the signature song, “I Miss” sung by the three of them. As the story unfolds we also meet Lizzy (Nicolette Robinson) who ends up serving as a grief counselor, and then a serendipitous meeting with Molly (Emily Walton) and the loveliest song of the evening, “With the Trees” delivered as a quartet. Many of the ensemble songs were delivered simply and plainly, downstage in full-throated concert hall poses. Those worked for me, once again harking back to how things are done in an opera house or concert hall, with the singers facing the audience for maximum effect. This was alternated with beautifully designed friezes of the characters scattered across the stage, frozen in place for the duration of the song. Where the direction of Sheryl Kaller ended and the choreography of Lisa Shriver began was sometimes difficult to differentiate. The movement of the actors on stage was often quite dramatic and spellbinding.

If there was a sameness to most of the songs it is because most of them seemed to have the same tempo and intonations. One song, “On a High” broke that formula for an excursion into a syncopated high speed outing which the audience responded to with lusty applause. The music could use more varied tempi, and possibly overlaying waltz, tango or other structures would do more to give each song a luster of its own. The basics are there, the refinements and polishing make rough gens sparkle. And that is the purpose of the Musical Theatre Lab, to find the sparkle in each song and to bring it out.

The lyrics to the songs are exceptional, as with this fragment from “High”.

SMILING IS NICE, CUZ IT MAKES YOUR FACE CRINKLE
AND WRINKLES YOUR SKIN UP LIKE RIP VAN WINKLE
YOUR CHEEK STOPS TEARS THAT TAKE THE TWINKLE
RIGHT OUT OF MY EYE, CUZ –
I’M TOO CALM TO COMPLAIN, I’M JUST SAYIN
SOME PEOPLE NEED A BIG HEAVEN TO PRAY IN
BUT I’D RATHER BE WHERE I AM, AND I’M STAYIN
I’M NOT GONNA DIE
I’M GONNA STAY HIGH

There is a great deal about A Little More Alive that is not only marvelous, but that touched me very deeply. There are also elements that could be strengthened, and I would hope that the creators – especially Nick Blaemire – and the audiences – that’s you and me – will have a chance to see this show grow into maturity. Produced in 2014 at Kansas City Repertory Theatre, its arrival at Barrington Stage is the second stop on its journey to completion. For its normally downbeat post-funeral subject matter, it reveals a lot of heart. The whole enterprise has a vivacity that can only be attributed to the fact the Blaemire is on the cusp of 30, coming into his full creative powers, and has a great future in store. Keep an eye on his work, it’s only going to get better over time.