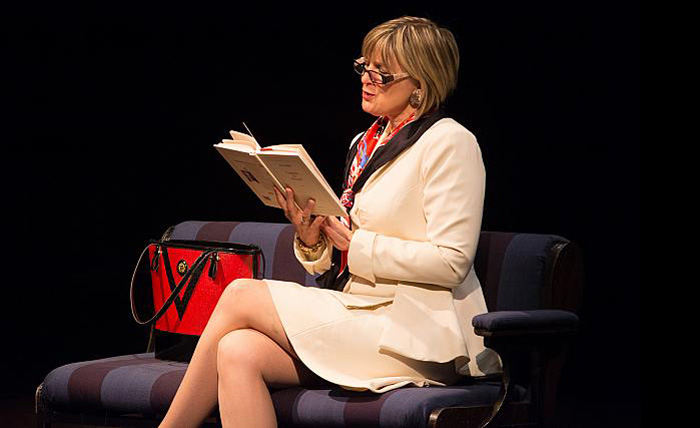 From Frankfurt to Paris with “The Unexpected Man” by Yasmina Reza
Theatre Review by Gail M. Burns

A man and a woman share their thoughts with us in extended monologues as they share a compartment aboard a train traveling from Paris to Frankfurt. Only occasionally do they connect with each other. She knows exactly who he is – Paul Parsky, the well-known author of the novel she is currently reading, an author she admires greatly. He has no idea who she is, even by the play’s end, and is interested in her only tangentially during most of the play, being rather self-absorbed. Finally, she dares to take the novel – entitled The Unexpected Man – out of her bag and read it before the author, which leads to the brief conversation that ends this 75 minute play.

The Unexpected Man (L’homme du hazard) is a 1995 work by French playwright Yasmina Reza, who American audiences always hear in translation by Christopher Hampton. Both in her native French and in translation, Reza’s work has been highly acclaimed. The two of her plays that made it to Broadway – “ART” (1994) and God of Carnage (2006) – both won the Tony for Best Play. This is one of her few plays not to win major awards across the globe, and it is, apparently, the lone legacy of Rick Dildine’s extremely brief stint as Executive Director of Shakespeare & Company. Director Seth Gordon is a friend of Dildine and it was Dildine who invited him to direct something in Lenox in 2015. Gordon has directed The Unexpected Man twice before, and elected to take a third pass at it here.

This may explain why it looks so oddly out of place on the stage in the Packer Playhouse, a house it cannot hope to fill, but it would have been impossible to stage such a static play – the actors stay seated throughout – in the Company’s smaller Bernstein Theatre where the three-quarters round configuration requires actors to keep moving and turning to bring the action to all the paying customers. The Packer Playhouse is also a three-quarters round configuration, but it has an actual stage, whereas at the Bernstein the shows play on the floor, and that has allowed for a revolve to be installed.

So for 75 minutes Corinna May and John Woodson revolve slowly before you while their characters expostulate about the mundane trivia of life – fickle friends, unwanted sons-in-law, indigestion, and the vagaries of travel. The ever-beautiful May is stunning in the “cream suit” Reza proscribes for her character, perfectly accented with chic pumps, handbag, and scarf in coordinating red and black. Woodson looks authorially rumpled. His character’s first word is “bitter” which is the theme running through all his enunciated thoughts until he manages to turn outward and engage with May’s Martha. When he does, his face softens from a hard, sourness to a soft and engaging geniality.

This is a rather sexist little dance. Martha and Parsky are not young people and they follow what are now old-fashioned conventions of deportment. Also, Parsky is, at least in Martha’s eyes, a celebrity, which immediately gives him additional power and elicits from her an increased level of excitement and deference.

But for all the stasis play and the detachment of the characters, I enjoyed The Unexpected Man. The revolve succeeds in allowing the audience to see the performers in three dimensions and adds much needed movement to the play. Robyn Warfield has done a masterful job lighting her moving targets, and Stella Schwartz’s costumes are true to the characters. The set by John McDermott is positively sparse with the exception of that ubiquitous, invisible revolve, which must have been an expensive piece to rent and install for this tiny play.

Expense is actually my key issue with this play. It is well-acted and impeccably staged, but with a top ticket price of $74.50 you are literally paying a dollar a minute to sit in the Packer Playhouse. I don’t usually parse out theatre in such a harsh financial manner, but the two person play The How and The Why currently playing in the Bernstein is on $49.50. Same size cast, many more costumes and set pieces, and much more story – in other words more bang for your buck. The Unexpected Man needs the large and expensive revolve which means it must play in the larger, more expensive house which it is unlikely to fill so ticket prices need to be high to help recoup on the investment…And while this is a good play, it is not a comfortable fit in the Shakespeare & Company season. Ultimately, with this tiny remnant of his tenure, the sad impact of Rick Dildine’s brief tenure at the helm is still costing the Company dearly.