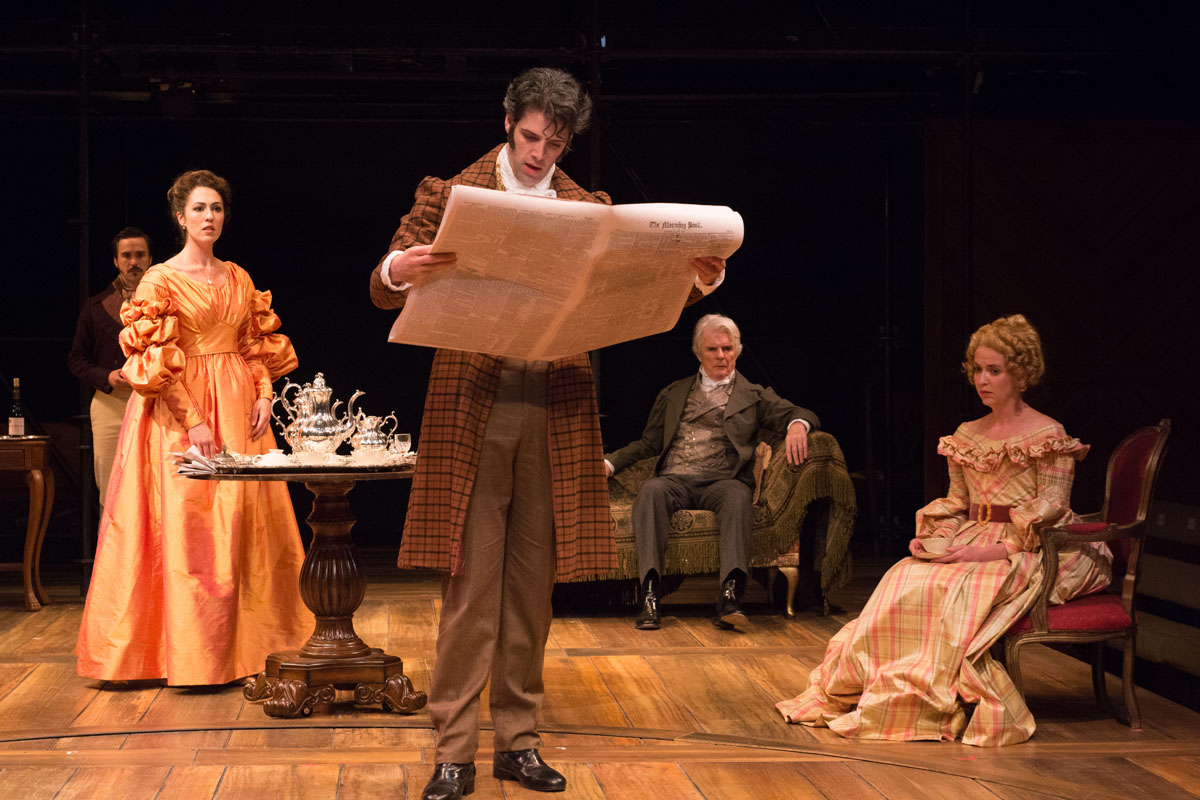 At the exact moment that Ira Aldridge stepped on the stage at London’s Theatre Royal Covent Garden, they were debating the Slavery Abolition Act in England. It was 1833 and until then white actors in blackface had always played the Moor in Shakespeare’s Othello. It was a racist custom that had begun in Shakespeare’s day and continued every day thereafter, holding sway upon the major stages until Aldridge stepped in for ailing actor Edmund Kean on that fateful night. He was the first black actor to play Othello on a major London stage. He was not a British actor, either. Less than a decade earlier he had emigrated to London from the US, where he was born, and had been limited up until then to a variety of roles in the small theatres in London.

The playwright Lolita Chakrabarti set down this history in the play Red Velvet which opened last night at Shakespeare & Company in Lenox, MA. The play has been performed in America only once before this, in a limited engagement by the British Tricycle company at St. Ann’s Warehouse in Brooklyn in 2014. This production, directed by Daniela Varon, is the first American production.

It stars John Douglas Thompson who, in an extended interview with him last week, found many parallels between his life had that of Aldridge. From the first moment Thompson strode the stage as Aldridge, he dominated, nay, commanded our full attention. The force between Thompson and Aldridge is strong. You can feel it, see it and admire it, for it radiates from the thrust stage of the Tina Packer Playhouse.

This production is more of a collaborative one than most since it is director Varon’s choice to hew as closely as possible to the stylistic eccentricities of the mid 19th Century, with its almost baroque and florid conventions, jokingly referred to on stage as the teapot school of acting. In Chakrabarti’s retelling of history, Aldridge fought many of its conventions, striving for a bit of realism, being undermined by the conservative Charles Kean (Ben Chase) who fights him every step of the way. When, as Othello, he is required to fight with his wife Desdemona (in the play she is the actress Ellen Tree, brilliantly played by Kelly Curran) his simple act of grabbing her during the performance raises the hackles of the press, the public and many in the company itself. That moment of realism is in fact a tragedy within a tragedy, and leads to the production being cancelled so that Aldridge would be prevented from appearing again on Covent Garden’s Theatre Royal stage.

All of this dramatic exposition proves to be theatre at its finest, with superb performances not only from the principals, but from the entire company which includes the tightly focused Malcolm Ingram, Joe Tapper as entrepreneur Pierre Laporte, Ravin Patterson as Connie, and Aaron Bartz as Henry Forrester. Christianna Nelson took on triple roles as Halina Wozniak, Betty Lovell and Margaret Aldridge, Ira’s wife.

Red Velvet comes very close to being more than an important historical play, but the play and production itself could use considerable tightening up. Starting with rethinking or eliminating the first and last ten minutes, both of which have serious problems. While both are important to telling Aldridge’s full story, the opening scene with its tangled languages, accents and convoluted interactions was just plain annoying to this member of the audience. Some of the dialogue was in partial German, partial heavily accented English and with lots of misunderstandings between the characters themselves, not to mention the audience.

The curse of Freytag’s Pyramid is at work again at the end. Developed in 1863, it mandates that the dramatic arc include exposition, rising action, climax, falling action, and dénouement. Many prefer Aristotle’s simpler protasis, epitasis, and catastrophe – that is a beginning, middle and end – since the final scene simply undermined the impact of the previous, penultimate one which could just as easily served as the conclusion of the play. In essence these scenes serve as a prelude and epilogue and might be better labeled as such.

The director and cast strived for authenticity in recreating the acting style of the 1800’s and brought in Adrienne Kapstein to help recreate the physical style of the period, and while still a bit stiff, succeeded successfully on stage. What disappointed was the between scenes choreography which made the resetting of the stage both cumbersome and lengthy. I am of the belief that if something does not advance the plot, get rid of it. In a sense watching Red Velvet became a bit like television at those moments, the vague circling scene changes taking the place of annoying commercials. You just sit there waiting for the play to resume.

That said, I loved Red Velvet, and the performance by John Douglas Thompson is indelibly etched in my mind’s memory, as is that of Kelley Curran; the casting of the two together made a perfect fit. And the choice of Red Velvet at the final offering of the summer season is one that was well made by Shakespeare & Company.

Audiences in Europe wanted to see him in Shakespearean roles rather than in the racial melodramas and farces that were popular in the British isles. As a consequence, Aldridge concentrated almost exclusively on performing as Othello, Shylock, Macbeth, and Richard III. In the course of his travels he won more major international awards and honors, often conferred by royalty, than any other actor of his day.” – from Bernth Lindfors’ biography of Ira Aldridge