“An Intervention” – a doubleheader with two casts at Williamstown Theatre Festival 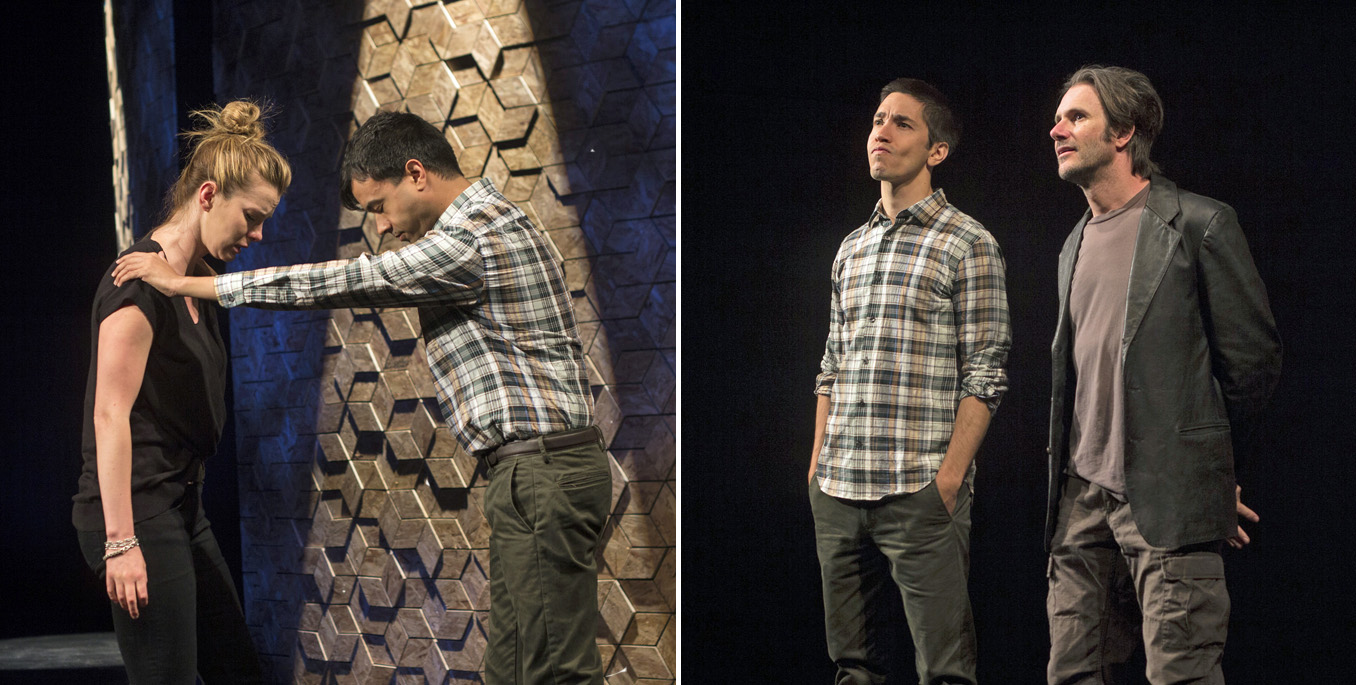 “An Intervention” – a doubleheader with two casts at Williamstown Theatre Festival

Because of visa problems the Williamstown Theatre Festival had to reluctantly cancel performances of Chewing Gum Dreams which was scheduled to play with An Intervention. Michaela Coel, the author and key performer was unable to make the trip to the US from the UK.

This enabled the Festival to make some interesting arrangements with its two casts for An Intervention, and resulted in the doubleheader performance I saw this afternoon, with additional double performances slated for Wednesday (19) and Thursday (20) at 7:30 and Friday (21) at 8:00. The final performances will be on Saturday with Cast Two (Betty Gilpin and Debargo Sanyal) and Sunday with Cast One (Josh Hamilton and Justin Long).

The play, as its title implies, is about friends and interventions – politically as in supporting going to war – and personally, as in trying to prevent a friend from drinking themselves to death.

In both iterations, it is the character called simply “A” (Josh Hamilton or Betty Gilpin) who love the sauce, and “B” (Justin Long or Debargo Sanyal) who is trying to intervene. The differing opinions on the rightness of the war, whether too much drinking is going on, and a new girlfriend for “B” complicate matters.

Now, for the record, some critics have written about how An Intervention can be played by male or female, ethnic, young or old, but that is not really true. The characters have to be on the young side, and one of them, “B” has to be a male in my opinion. To reveal why would be to print too many spoilers, so you will have to take my word for it, or see the play for yourself.

However, this is one of those very talky plays in which I for one, was never able to connect to either of the characters, both of whom spent the bulk of the hour and a half accusing, testing, denying, joking and then arguing some more with each other. The pair has no sexual attraction to each other, but rather see friendship as a sort of barter system of helping each other in their hour of need. And those needy hours do indeed arrive in this play.

The endless bickering and plentiful similes become wearing not too long after the play begins, and never lets up until the final of five scenes in which an indefinite ending leaves us hanging. Literally.

Of the two casts, Cast One – Hamilton and Long – is the easiest to understand and has a playing time some fifteen minutes shorter than Cast Two – Gilpin and Sayal. I was not the only one trying to hear what Gilpin was saying due to swallowing her lines and poor enunciation, and while some slack has to be cut because of the fact that she was drinking, the muttering asides were totally lost on most of the audience on the right side of the house. Another problem was the curved wall that stood in for the three locations in the play, and the fact that the director, Lila Neugebauer, a relative newbie, seemed to favor downstage right for much of the play. After Cast Two did their longer performance, most of the empty seats after the intermission were on house right, having lost about 30% of the audience, while the other side of the house, seemed to retain virtually all its ticket holders. Many audience members switched seats to hear better, and some latecomers arrived to see the Hamilton and Long Cast One version.

In any case the themes here, friendship, battles and escape from reality are all interconnected, but when it comes to friendship, as A says to B, “I thought we were best friends.” The response: “Only small children have best friends.”