An outstanding production of “The Rose Tattoo” at Williamstown Theatre Festival 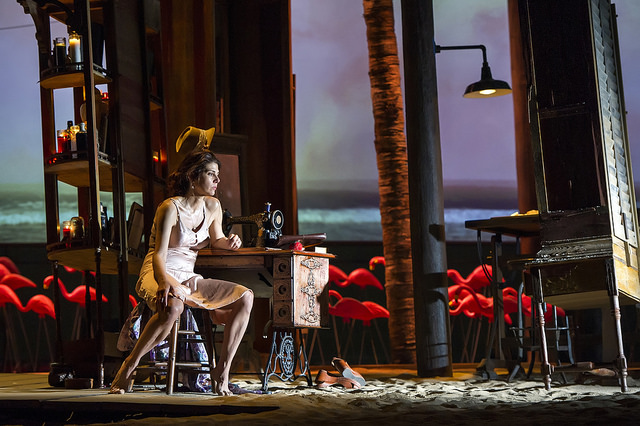 An outstanding production of “The Rose Tattoo” at Williamstown Theatre Festival

Tennessee Williams is one of our country’s most important playwrights having written masterpieces from the mid-1940’s to the early ‘60’s including The Glass Menagerie, A Streetcar Named Desire, Cat on a Hot Tin Roof and many other dark, brooding dramas. In 1951 he wrote a very different work, The Rose Tattoo that is as intense as the others but also hugely funny. Williamstown Theatre Festival has mounted an outstanding production of this seldom-performed play with the marvelous Marisa Tomei leading an exceptional cast.

Serafina Delle Rose (Ms. Tomei) and her fifteen-year old daughter live in a ramshackle house in a Gulf coast town in Louisiana. She was widowed three years ago when her husband Rosario was killed in a truck accident while smuggling drugs. She worshipped him and boasts about the rose tattoo on his chest and their love-making to her female neighbors, most of whom neither like nor respect her. She is an object of derision throughout her neighborhood and they are aware that Rosario was not faithful to her, though they never use that against her. A devout Catholic immigrant from Sicily, she keeps a statue of the Virgin Mary with a candle lit 24 hours a day and speaks to it. She tells her only friend, Assunta (Barbara Rosenblat,) that the statue speaks to her.

Serafina’s daughter Rosa (Gus Birney) has fallen in love with Jack (Will Pullen) a girl friend’s brother. Serafina is fervently opposed to Rosa having any relationship with a boy/man at her young age, though she was married when she was fourteen. She has kept Rosa locked in a room preventing her from going to school and her graduation ceremony since she has discovered that Rosa has been seeing Jack. At the urging of Assunta and Rosa’s teacher she allows her to attend the ceremony.

Alvaro Mangiacavallo (Christopher Abbott) stumbles into Serafina’s life after having a fight at her front door with a salesman (Darren Pettie) who forced him and his truckload of bananas off the road. She is reluctant to let another man into her life since she has sworn allegiance and celibacy to her husband’s ashes.

The play has some of Williams’ richest dialogue and plot elements. Though the work starts off somewhat seriously it slowly reveals its raucous comical elements, much of it delivered by Serafina and Mangiacavallo. Neither one of them is an intellectual giant and they both speak from the gut, but they also know how to tease and humor each other. There is passion in everything they do and say, even in simple conversation.

Ms. Tomei dominates the stage in a dynamic performance. Her range of emotion is broad and flamboyant which enlists the audience’s empathy. Serafina has moments of deep sorrow and maniacal despair that are finally balanced by a thirst for life. Tomei plays all the emotions honestly with compelling power. She is complemented by Mr. Abbott who holds his own with her. His Mangiacavallo is a bumbler filled with charm and innocence. It is impossible not to enjoy his fumbling and child-like personality.

The relationship that develops between them is contrasted with that of Rosa and Jack. The young people are new to the sexual yearnings and instinctual love they are experiencing. Their naiveté lends a sweetness to the play that is rarely found in Williams’ characters. Birney and Pullen keep their work simple and touching. The rest of the cast, which includes three children who give color to the area as well as the Strega -a witch- (Constance Shulman,) who walks through the town leading a goat, serve the play well helping to create the colorful but often oppressive ambiance. Giuseppina (Lindsey Mendez) sings beautiful Italian folk songs that create an often mellow, reflective tone.

Director Trip Cullman has done Williams a great service. His staging is both vibrant and subtle. The actors perform with great energy bringing depth to their characters and enhancing the mood of each moment. He often has the neighbors on the periphery of the playing space surrounding Serafina’s house where they serve as a Greek chorus occasionally commenting on the action or directing remarks directly to her. Though there is a great deal of physical action the performance is tight without a wasted moment.

Mark Wendland has created a set that is open all the way to the upstage wall where a flock of flamingoes sit. Across the rear wall and extending part way downstage is a scrim on which projection designer Lucy MacKinnon has projected never-ending waves adding to the atmosphere of the locale. Michael Friedman’s original music underscores the various delicate and tumultuous moments.

Though not one of Williams’ highly respected plays, this production gives it a renewed life. See it here in case it isn’t produced for another long time.