Review: “Ugly Lies the Bone” has important things to say about our Veterans 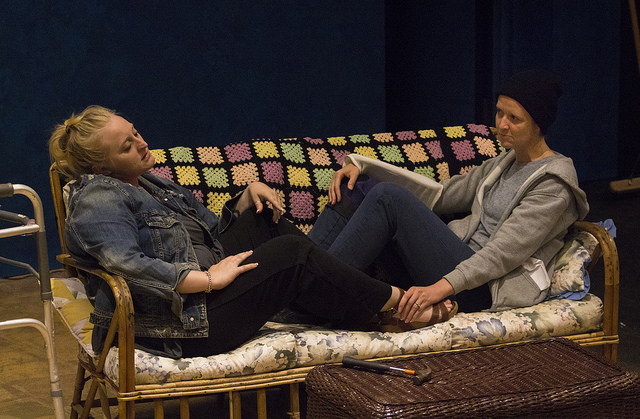 Review: “Ugly Lies the Bone” has important things to say about our Veterans

For years countless men and women have returned from the wars in Iraq and Afghanistan with horrendous physical injuries. In Lindsey Ferrentino’s play Ugly Lies the Bone, currently at Shakespeare & Co.’s Bernstein Theatre, we meet Jess (Christianna Nelson) a young woman who has suffered severe physical damage as well as profound psychological pain.

Having returned to her childhood home in Florida she shares with her sister Kasie (Rory Hammond), she is undergoing a rehabilitation process that involves a virtual reality experiment in which she wears goggles and is urged by an unseen character (Ariel Bock) to create her personal version of Paradise. This, presumably, will move her away from her bleak daily existence into a world that will give her hope for the future. As Jess creates her idyllic space the voice continually urges her to “Move forward!” Her conflict is that she wants life to be what it had been, especially before her third deployment. Her mother (Ms. Bock) was well and vital, her lover Stevie (Hamish Allan-Headley) cheered her, and her sister Kasie was happier. Now, mother is institutionalized with Alzheimer’s, Stevie is married and works as a gas station attendant, and Kasie is in love with Kelvin (Dylan Chalfy) who is unemployed plumber.

As she wanders through tedious days avoiding reminders of her war experiences – loud noises, crowds, even sand, she tries to revisit her more comfortable past by asking her sister and Stevie to help her remember the way things were. These several scenes are written and acted with poignancy and truth.

The production is affecting though there are weaknesses some of which are inherent in Ferrentino’s script. The secondary characters, especially Kasie, are underwritten and need fleshing-out. As Jess, Ms. Nelson has to carry the play; at times, however, in moments that dictate internal urgency and maddening vexation she seems to weaken. Her more gentle scenes are flawless and touching. Mr. Allan-Headley’s Stevie deftly conceals his sadness with his job and marriage with feigned silliness that makes him appear ingenuous.

Ms. Hammond’s Kasie is too contained. She has been responsible for her mother for years and now has to tend to her sister’s physical and psychological needs. An overpowering exasperation is seldom seen. She comes to life, however, when she talks about Kelvin. Mr. Chalfy provides much-needed comic relief, but, if his character wasn’t in the play the plot would be tighter and more intense.

Director Varon keeps the play moving, and with the creative use of John McDermott’s utilitarian set and James Bilnoski’s lighting design, scene changes on the small Bernstein stage are rapid and unobtrusive. There does seem to be a superficial quality to the work which is probably due more to the script than Varon’s direction.

Despite the few flaws this play has important things to say about our veterans and our attitude toward our own lives. Move forward!