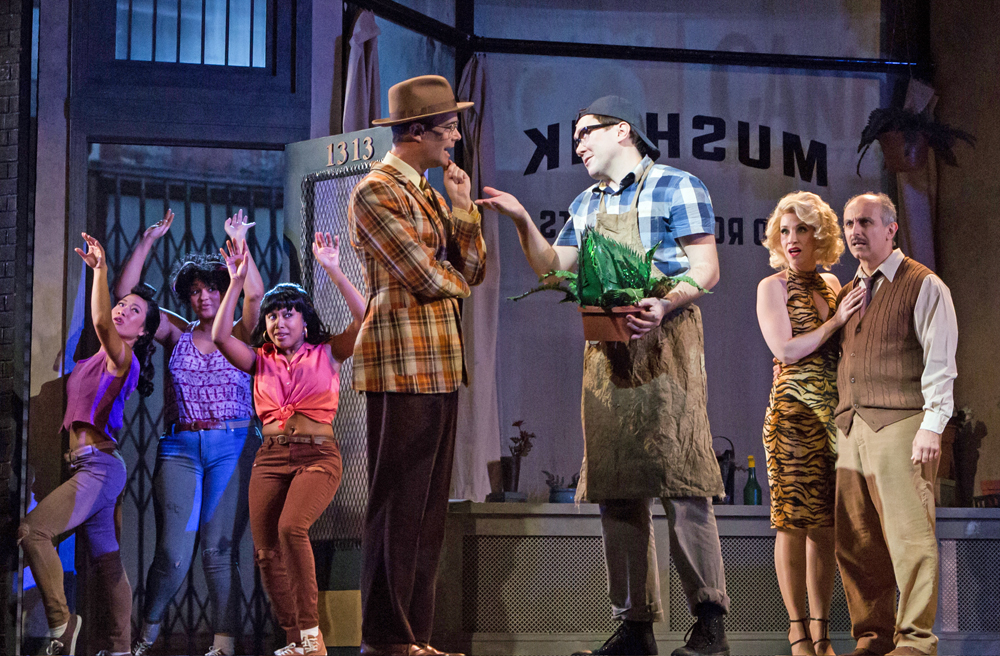 The cast of Little Shop of Horrors at the Colonial Theatre, photos by Emma K. Rothenberg-Ware.

Stanley Bahorek and Jamed Ludwig in Little Shop of Horrors at the Colonial Theatre, photos by Emma K. Rothenberg-Ware.

Little Shop of Horrors at the Colonial Theatre, photos by Emma K. Rothenberg-Ware.

Like a Christmas Tree draped with tons of tinsel, a whole new Audrey II made her appearance in the Berkshire Theatre Group’s re-imaging of the classic skid row musical, Little Shop of Horrors. And as funny as it was to behold Taurean Everett as the infamous hungry green plant from outer space, she was but one of the many pleasures that this brilliant musical has in store at the Colonial Theatre. This is, after all, the deviously delicious Broadway and Hollywood sci-fi smash musical which has been devouring the hearts of theatre goers for over 30 years.

I have seen perhaps a half dozen productions of Little Shop in theatres big and small, but none has come close to the perfection of the cast that director Ethan Heard assembled into a true ensemble that meshed together perfectly. At the top of his form is Stephen DeRosa as Mushnik the florist, one of the finest character actors around, and whose physical comedy work is matched with his sublime ability to play dead serious as well.

Stanley Bahorek, no stranger to the Berkshires either, slipped easily into the role of the nebbishy Seymour, and with both great acting chops and a strong baritone voice sold every song and bit of business he had with all the other characters on stage, and his plaintive exchanges with the carnivorous plant had the audience howling. Of course he is in love with Audrey, after whom he named the plant, and Lindsay Nicole Chambers captured her sweet spot, which is somewhere between caricature and pathos as her clueless character demands.

As her boyfriend Orin the Dentist, and brief other roles, James Ludwig was a gas (ahem!) and apparently quite delicious to both the opening night audience and hungry plant alike.

But it was the Urchins of Skid Row, the glorious Chiffon (Alia Hodge), the sensual Ronnette (Kay Trinidad) and the superb Crystal (Jalise Wilson) who are the connective tissue that holds the whole story together. Trust me. No urchins, no show.

The music for Little Shop is under the direction of Rick Bertone who, with a quartet of other musicians makes the whole show sound great. This production’s actors have excellent singing voices, and likewise these same singers have great acting chops.

Given that Little Shop of Horrors makes no pretensions about being some sort of Masterpiece Musical, at the same time it would be wrong to dismiss it as a simple silly show. No other musical is as filled with pure camp and total fun except for possibly Urinetown or Spamalot.

Little Shop has actually been very tightly crafted by Howard Ashman and every word he set down is essential to the show’s success. His book and lyrics combined with the memorable music of Alan Menken are a theatrical concoction that is almost foolproof. So with the assignment of a drag queen (gasp!) to play the vine with a voracious appetite, there were murmurings of discontent from some Little Shop fans. They need not have worried, since Audrey II starts off as a normal little potted plant and grows several times before the tinsel and fully toothed maw of her true personality appears. And having seen more than one half-dead puppet play the role, this imaginative approach brought a lift to a prop that in other shows can sag.

The production itself has a huge, impressive and versatile set by Reid Thompson that has a dozen small touches that made it the more amazing. The three story brick building’s windows are not only illuminated from inside, but watch to see that the lit ones were constantly changing as residents came and went. That’s a credit to Oliver Wason’s lighting which is tight, detailed yet efficient for this show.

The costumes were so perfect for the story’s characters and location they hardly stood out until the end when they became the star of the show for the finale.

The ending itself is different from the usual vines descending from the ceiling to devour the audience, but you won’t find any spoilers from me about the twist Ethan Heard has devised. It’s the first of many surprises that lay in wait for you when you see this gem of a show. Better put this clever entertainment on your list of things to do. It’s only here until July 23.

And the great ones – like this – don’t come along very often.