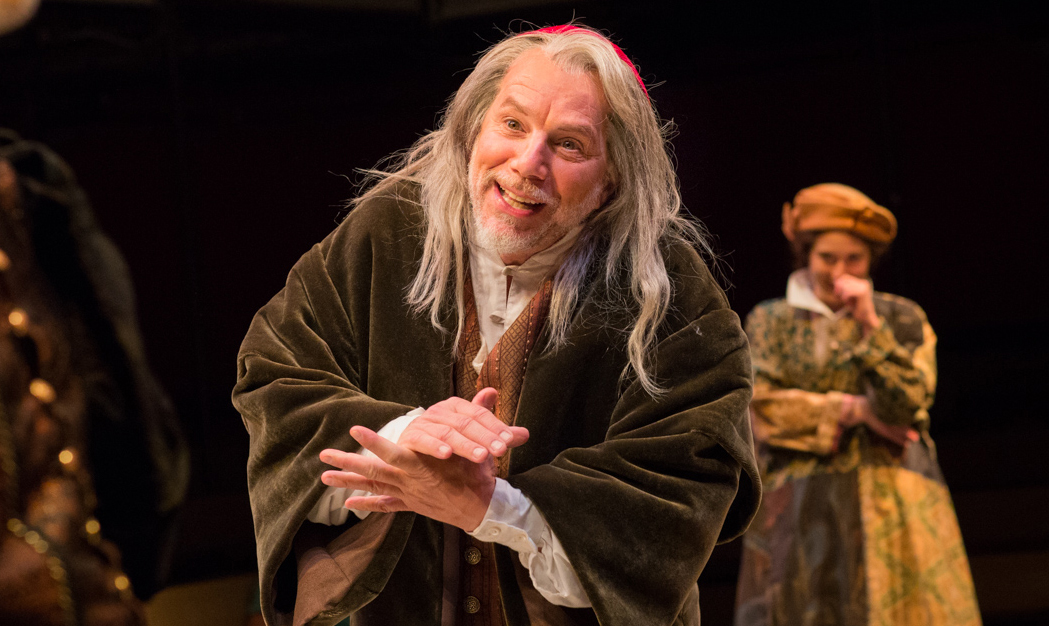 All photos by John Dolan

The Merchant of Venice is fairly early play in the Shakespearean canon, and it is not a particularly good one, being a mash-up of two or three folk tales well known to Elizabethan audiences, that don’t hang together particularly well. Add to that that attitudes towards Jews are very different in 21st century America than they were in 16th century Britain, and you have a real “Problem Play.” When Shakespeare & Company last staged this work in 1998, then as now with Tina Packer directing and Jonathan Epstein playing Shylock, there was a great public outcry against the play, with questions raised about whether it could, or even should, be staged in modern times.

Having taken the plunge and mounted a new production, I can only imagine the dismay with which Packer and company watched racial tensions and violence erupt nationally during the course of their previews. Merchant… is the big Shakespearean production for 2016, the centerpiece of their season. Would the national mood turn audiences against their choice? Or would they be more open to exploring the prejudice that has always raged within society?

At least on the official opening night, the audience, comprised primarily of the press along with Shakespeare & Company board and company members and donors, was open to being schooled in the depth and persistence of anti-Semitism in particular and racial/ethnic/religious hatred in general. It was perfectly acceptable to be prejudiced in Shakespeare’s time, particularly on religious grounds, as Roman Catholics and Protestants of various ilks waged bloody warfare across most of Europe for the right to be considered the “true” religion of the people. Catholics considered Protestants, Jews, and Muslims alike to be pagans and heretics. Their souls were going to burn in hell if not “saved” by conversion to Christianity.

Merchant… has a “happy” ending in that two Jews – Shylock and his daughter Jessica – are “saved.” Jessica (Kate Abbruzzese) by choice, to wed the Gentile Lorenzo (Deaon Griffin-Pressley), and Shylock by force, through order of the court in order to save his life and at least half of his estate. Packer and her actors present Jessica’s conversion as ultimately bittersweet, enabling her to have husband and riches at the cost of father and faith, while Shylock’s forced conversion is presented as out and out tragedy. This is certainly not what Shakespeare intended, but it is believable and acceptable to modern audiences.

The other primary plot in Merchant… is the story of the wealthy and beautiful Portia (Tamara Hickey), whose late father has decreed that whichever suitor (and she has many!) selects the casket (a small ornamental box or chest for holding valuables, not a coffin) containing her portrait, will gain her hand in marriage and all her wealth and property as well. Bassanio (Shahar Isaac), companion to Antonio (John Hadden), the titular merchant of Venice, is Portia’s chosen love, but since this is a romantic/comic plot, we must first watch as Portia and her maid Nerissa (Bella Merlin) suffer as two completely unsuitable suitors, the Princes of Morocco and Arragon. both played as broadly comic ethnic stereotypes by Erick Avari, attempt to select the right casket. While Hickey and Merlin are delightful here and in all their scenes, I found Avari’s exaggerated mugging tedious and therefore less funny than intended.

With Jessica, Portia, and Nerissa – who marries Graziano (Jason Asprey), one of a confusing clutter of male friends of Antonio and Bassanio – all safely wed, the play moves on to deal with the court proceedings to deal with Shylock’s sudden demand for his pound of flesh from Antonio when the long-standing feud between the two gentlemen is aggravated by Shylock’s double loss of his daughter and the 3,000 ducats owed him. Portia and Nerissa disguise themselves as men, a lawyer named Balthazar and his clerk, Stephano, and Portia untangles the legal Gordonian knot, but as they go unrecognized by their husbands they are also able to witness, and provoke, some questionable spousal behavior. This too gets cleared up and the husbands learn their lesson.

And, as I explained earlier, this was considered a happy ending for all for Elizabethan audiences. Everyone was married and/or Christian, and the villain had gotten his just desserts but had been spared both death and abject poverty.

Packer plays the anti-Semitism and other racial and ethnic attacks for exactly what they are. The Packer Playhouse is now configured as a theatre in the round and hung from the balcony surrounding the stage are banners with quotations from many sources which the process of working on the play evoked from the actors. They form a “Memory Theatre,” as do the writings of Aemilia/Emily Bassano Lanier, who Packer believes may well have been the Dark Lady of Shakespeare’s sonnets, which cover the white cross on the black stage floor.

The cast is multi-cultural, with some actors cast obviously against type, and Packer has added in much peripheral business to emphasize what a cultural/racial/religious melting pot the bustling port of Venice in the late 16th century. While these moments add color to the production, they also distract from what is already a cluttered canvas (there are three separate “friends of Antonio and Bassanio” named Salanio, Salario, and Salerio for no apparent reason.) The play offers up a hefty dose of hatred and blind prejudice without any added dimensions.

Packer has also added a homosexual love affair for Antonio and Bassanio. While Shakespeare’s text has the two men expressing their “love” repeatedly, that kind of language is common between same sex pairs throughout pre-20th century literature without any sexual relationship implied or expected. Having this pair obviously sexually entangled early on in the play and then again in the courtroom scene where Bassanio’s wife, Portia, is there to witness them sets up a love triangle where Shakespeare didn’t intend one to exist and which isn’t resolved by the text.

The clowns in Merchant… are Launcelot Gobbo (Thomas Brazzle), a servant first to Shylock and then to Bassanio, and his blind father Old Gobbo (Michael Fuchs.) These talented actors get a fun scene together and Brazzle reappears several times for brief interludes. Then suddenly, at his final appearance in Act V, scene I, Packer has him perform a bizarre attack on current North American racism with a minstrel show turn that is overwrought and out of place. Tyler Kinney’s costumes set the play in Shakespeare’s own time, so the relentless insertion, nay, intrusion, of 21st century language and ideas is annoying and distracting.

But thanks to Kinney, set designer Kris Stone and lighting designer Matthew Miller this show looks wonderful. Kinney’s costumes show the attractive and talented cast to good advantage, and have a good freedom of movement as well, despite the period attire. Stone has filled the air above the stage with a multitude of many sizes of clear spheres, inside of which are tiny twinkling lights and miniature all-white renderings of various props from the play. I was reminded of the balloons at the Rockefeller Center Skating Rink when I was a child which featured little white snowmen encased in a snow-flecked globe. These spheres rise and fall and change color, melding seamlessly with the rest of Miller’s lighting plot, and with original music by Daniel Levy.