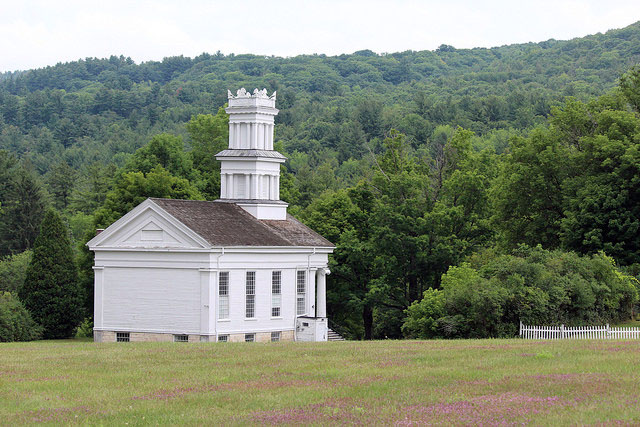 There are many ways to approach becoming a part of a new community. For Ann Gallo, as soon as she and her family moved full-time to the vacation home they’d bought in Tyringham, MA, in 1999, her method was her mission: To present a site specific community production of Thornton Wilder’s Pulitzer Prize-winning play Our Town outdoors adjacent to the town’s cemetery. It was on Memorial Day of 2015, the year they made the permanent move to the Berkshires, that the inspiration struck Gallo as she watched the present day community honoring its war dead among the history represented by the 800 headstones, some dating from before the American Revolution, in the beautiful cemetery setting.

Incorporated in 1767, Tyringham, population 326 at the 2010 Census, is located in the Hop Brook Valley. According to Wikipedia: “To the northeast of the valley, Baldy Mountain rises to a large plateau which stretches into the neighboring towns, and includes Goose Pond. To the southwest of the valley, two mountain peaks – Mount Wilcot and Hunger Mountain – rise in a plateau in neighboring Monterey.” The Appalachian Trail passes through the town, but Tyringham is not served by any state routes. There is no shopping, banking or other commercial businesses in the town. The town flag still proudly proclaims Tyringham to be “a hinterland settlement.”

“Moving here I really wanted to do community work here the way I had been doing it in Pittsfield,” Gallo explained, taking time out from a hectic tech week to chat with BerkshireOnStage.com. “I was a relative newcomer in Tyringham so of course there was plenty of skepticism. Ninety-eight percent of cast has never been on stage before.”

“When we got here in the fall of 2015 I hit the ground running, using a model developed by the Cornerstone Theatre in Los Angeles where I have taken workshops. First I made up flyers and at the town wide tag sale I went to house to house handing them out and talking to people. Then I held a meeting and key members of the community appeared out of the woodwork. Next the older women showed up. We talked and talked through many meetings. We had a movie night where people watched the 1977 Hal Holbrook version of Our Town. Then in March we held a potluck fireside read through and more than forty people showed up! One women didn’t even tell her husband where they were going, but he ended up reading and enjoying himself.”

That reading marked a turning point. By the time Gallo announced auditions over a series of weekends this past spring, she knew she had enough people to cast the play. “Our director, Courtney O’Connor, who I connected with when earning my Master’s at Emerson, was really good at suggesting characters and encouraging people. They were terrified, but they made the commitment. In the end we only had to ‘import’ two actors, one from Housatonic and one from Lenox. All the rest of the cast and crew are Tyringham residents.”

“The very first rehearsal was really an overwhelming moment and a wonderfully fun day,” Gallo said. “ And now, looking at all the people scattered across the front lawn of the Union Church, I marvel. They are all there, no one is rolling their eyes, they are each present in their characters.”

Gallo and Mark J. Curtin have created 10-20 foot outdoor structures inspired by the artist Christo placed around the beautiful field in the heart of the Tyringham valley. The large swaths of white sheeting hints of clothes on a clothesline – Gallo has incorporated clothespins into the design – while also providing needed shade for the audience.

But the show will move inside the Union Church in the event of rain. “We had to reblock the whole show indoors!” Gallo exclaimed, but noted that performing outdoor offered its own special challenges, particularly with sound, making sure the audience hears what they need to hear and that all involved can cope with or ignore unintended environmental noise. Also, parking and crowd control are important outdoors. Gallo has recruited a large volunteer unit just focused on those issues.

Describing herself as a former introvert, Gallo confesses that this experience helped her move past hesitancy to reach out for fear of rejection. “I learned that you can sell something to the devil if you are passionate about it,” she laughed.

“I didn’t go in to this process with expectations, in fact I was careful not to, and that was a really wonderful choice,” Gallo said. “Theatre brings out everybody’s story – everybody has a story – and sharing those stories is how people build trust amongst each other. As in any small town, there are lots of long-held opinions, but through this process I learned that this town was what I thought it was and I know there is some depth to it. It’s not about the play, It’s not about the play, this is about this town and the people here, we’re a family now. This has nothing to do with Ann Gallo doing a project.”

With Our Town set to open August 5 for a two-weekend run, Gallo is looking ahead to her next adventures as she continues working on a local history project to capture the stories of Tyringham’s seniors. She wants to do a site specific production of the 1912 novel Daddy-Long-Legs, which Jean Webster wrote while visiting Tyringham. “I envision it being very intimate, like the Parlor Series at The Mount where you move from room to room within a home.”

And she has begun discussions with the leadership at Hancock Shaker Village about adapting Rachel Urquhart’s 2016 novel The Visionist – set in a fictional New England Shaker community in the 1840s – into a site specific play.

Our Town By Thornton Wilder

children under 10. Tickets can be purchased on day of the show.

Bring a lawn chair or blanket! The production will be outdoors. In case of rain, performances

will be held inside the Union Church of Tyringham.