REVIEW: “Where Storms Are Born” at Williamstown 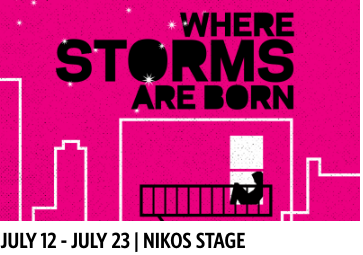 REVIEW: “Where Storms Are Born” at Williamstown

The 2017 season underlines Williamstown Theatre Festival’s commitment to new work.  Six of the seven plays at the Festival are new or world premiere plays.   Artistic Director Mandy Greenfield, who connects playwrights with directors, actors and designers, invited established playwright Harrison David Rivers to join the Festival in 2016 as a Playwright-in-Residence, in order “to have a living, breathing artist responding to the world,” and to “let the festival respond.” Rivers said of his experience, “It was really inspiring in terms of my own writing.”  This year he has returned with a world premiere production of his latest effort, Where Storms Are Born.

This work was a 2015 finalist for the Eugene O’Neill National Playwrights Conference, and the recipient of a 2017 Edgerton Foundation New Play Award.  Rivers appreciates the support he has received from the Williamstown Theatre Festival: “Sometimes in a place outside of WTF, the mess of life still enters the room.  And here, for the eight hours that we’re in the room together, the play is the thing, and it’s a luxury.”  He adds: “the holistic nature of the art-making here contributes to the depth and the quality of the pieces on the stages.” At a time when the arts are becoming more and more marginalized, the Festival is offering a helping hand to artists.

Rivers’ depicts a loving family grappling with loss.  The matriarch, Bethea (Myra Lucretia Taylor), is a widow raising her younger son Gideon (Christopher Livingston) in an apartment in Harlem, while her older son Myles (Leroy McClain), has been incarcerated at Sing Sing for the past thirteen years after a drug deal spiraled out of control, leading to a fatality.  Now Myles has died in prison, though he returns in flashbacks.  His death is never explained or even explored.

That is not the only question Rivers leaves unanswered.  Why, one wonders, was Myles, one of three dealers involved in the fatal drug transaction, the only one to serve time?  Why is Bethea certain that Myles was innocent while Gideon remains conflicted?  Why, in a play so concerned with justice, does no one inquire about Myles’ death in his cell?

One answer may be that Rivers is more interested in character than in plot.  The most striking aspect of this moving, poetic, sometimes comic play is the complex and contradictory portrait he constructs for  each character.  The actors are more than up to the task of bringing them to life, under the direction of the empathic Saheem Ali.

The play revolves around Bethea, the mother.  Myra Lucretia Taylor, a ten year WTF veteran, can break your heart in her portrayal of a deeply religious widow who loves her sons “like breathing.”  Always strict in their upbringing, teaching them right from wrong, she cannot understand how her boys turned out so differently.  But as tragic as her character’s situation is, Taylor can also suddenly turn around and make us laugh.  Her younger son, the devoted Gideon, who idolized his older brother when they were growing up—a Robin to Myles’ Batman—nevertheless explodes in anger at his mother when she talks about him too much.  He only visited Myles once in prison at the beginning of his brother’s incarceration, considering him dead the rest of the time.  Christopher Livingston allows us to see the many sides of Gideon, fully committing to the emotional gamut between anger and vulnerability.   LeRoy McClain is touching as the deceased Myles, who loved the constellations but spent much of his life in a place where he couldn’t see the night sky, and loved his family—his Mom, his constant and only visitor, and his little brother (#2).   We ache for him as we do every time we read the newspapers and see another African-American male jailed, beaten, or killed.

Even the friends and acquaintances surrounding the family are carefully drawn.  Joniece Abbott-Pratt plays Gideon’s funny, fast-talking best friend Worthy, with whom he works in customer service at a hotel.  She has stood by him since they were children, but makes terrible choices in her own life, expecting Gideon to help her take violent vengeance on her cheating boyfriend’s new girlfriend.  Abbott-Pratt injects a jolt of energy as she bounces onto the stage, dancing and punching Gideon, pushing him to find a partner to help him move on with his life.  Luke (Luis Vega), a prison guard who befriended Myles, turns out to have a law degree but prefers to care for the inmates in his charge.   Vega portrays him as insecure, lonely, compassionate and thoroughly likable.  Benton (Joshua Boone), another of the drug dealers, provides much of the tension in the play, as, in the wake of Myles’ death, he attempts to befriend the mourning family.  Boone walks a delicate line between betrayal and survival in a performance that avoids easy answers.

The designers add immeasurably to the play:  Scenic designer Arnulfo Maldonado, creates a simple, open black fire escape, where much of the action takes place, wooden benches with room for costume pieces stage right and left, and a downstage table that also serves as a bed.  Scene and time changes are instantaneous with this versatile set.  Lighting designer David Weiner illuminates the walls with strong, primary colors that change from blue and green to yellow and red with the passing of time that emphasize the shadows projected by the set.  Sound designer Miles Polaski offers lively transition songs that lead us to and from the scenes, including a terrific dance piece.  Costume designer Jessica Pabst clothes Worthy in the crazy patterns and styles that fit her outsized personality, and finds simple, easy-to-change outfits for the others.

Thanks to the dedication of Greenfield and her staff, playwrights are offered the opportunity to explore their plays in an atmosphere that allows them to grow and change.  Given time, space, and expert collaboration on the part of Ali and the actors, Rivers’ characters have evolved into fully-rounded human beings struggling with love and sadness, laughter and pain, guilt and loss.

Where Storms Are Born runs from July 12-23 at the Nikos Stage of the Williamstown Theatre Festival.  For tickets call 413-458-3253 or online at wtfestival.org.