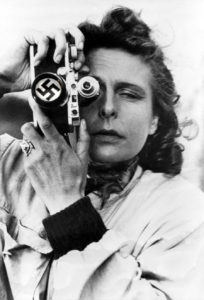 For the past four years, Bridge Street Theatre has laudably dared to present challenging plays with highly controversial central characters.  Following up on last year’s depiction, in The Effect of Gamma Rays on Man-in-the Moon Marigolds, of a mother whose verbal and emotional abuse threatens to destroy her children, Roxanne Fay returns to portray Leni Riefenstahl, the brilliant filmmaker denounced in the aftermath of World War II as a Nazi sympathizer.  Both of her famous documentaries–Triumph of the Will (1935), showing a 1934 Nazi Party Rally and Olympia (1938), capturing the 1936 Summer Olympic Games in Berlin–glorify Adolf Hitler and his National Socialist vision.

Leni, a play by Sarah Greenman, is a two-hander, pitting a young Leni (Olivia Howell) against her older self (Ms. Fay).  In his preshow talk, Dramaturg Steven Patterson explains the conceit of the play, which imagines a “purgatory-like soundstage,” on which Riefenstahl supposedly films her own biography.  Although we can glean from the set (designed with great detail by Director John Sowle), filled with furniture, props and lighting instruments, and the comments directed by Leni to Horst, her off-stage cameraman, that Leni is in the process of filming, the script does not make clear either where we are or what is being filmed.  Riefenstahl did not in fact film her autobiography though she did publish a 1987 memoir and cooperated in a production of the documentary: The Wonderful, Horrible Life of Leni Riefenstahl.  Greenman, who saw that film, has imagined that the narcissistic Riefenstahl would have created a film about herself had she been permitted to do so.

Riefenstahl was a remarkably innovative filmmaker, introducing such techniques as moving cameras, panoramic aerial shots, slow motion and underwater diving shots.  But because of her close association with Hitler, the extent of which is not known, she was permanently banned from making films following several arrests and trials after the war.  Greenman’s play, in its most successful scenes, re-enacts postwar denazification interrogations, during which the young version of Leni presents the evidence against the older one in prosecutorial fashion, attacking her films as propaganda for the Nazis.  Young Leni even reads Riefenstahl’s comment after the first time she heard Hitler speak at a rally (quoted in her 2003 New York Times Obituary:  clearly this is not a linear play!):  “That very same instant I had an almost apocalyptic vision that I was never able to forget.”

The older Leni attempts to justify her work by denying that she knows anything about the extermination of the Jews, declaring that she is only interested in creating art and filming beauty, and complaining that she is the subject of discrimination because her enemies refuse to accept that such exceptional films can be made by a woman.  Furthermore, she argues, how can she be accused of propaganda when she is merely showing what she observes?  After all there is no commentary in her documentary films, which are accompanied solely by music.

The Bridge Street production features projections of photographs and excerpts from Riefenstahl’s films.  Sowle excels in his design  work here because even the short film clips (would that there were more!) demonstrate the filmmaker’s extraordinary techniques.  What feels unnecessary and repetitive are the scenes in which Howell, as the young filmmaker, visits Hitler (an empty chair), asking for financing for her films and conversing with him.  In setting up those scenes to be “filmed” by the older Leni, the actors are required to spend too much time moving furniture.

Fay gives another strong, nuanced performance here.   From her use of German to her German-accented English, to her brisk and determined way of walking, the confidence she exudes as she gestures to the unseen Horst to cut a scene or at one point demanding that he shut off the camera, to her dialogue with the audience and her increasing anxiety as she defends herself by refusing to accept responsibility for her actions—this actress is in command of her character and takes us with her every step of the way.  As her counterpart, Howell is especially effective in the interrogation scenes, beautifully directed and acted with mounting clashes between the women, gradually shifting the balance of power as Howell begins to direct the filming.

The play, which attracted Patterson’s attention when it was performed this spring at the Aurora Theater in Berkeley, California, asks important questions that resonate today.  Can we separate art from politics? Are the media guilty of cynically manipulating the public?  Condemned by American media, Riefenstahl decried their “fake news.”

LENI runs from May 17—27, 2018 on Thursdays, Fridays and Saturdays at 7:30 pm and Sundays at 2:00 pm at the Bridge Street Theatre. Informative pre-show talks by Dramaturg Steven Patterson start 20 minutes before curtain.Tickets may be purchased online at leni.brownpapertickets.com or call 518-943-3818. http://bridgest.org/