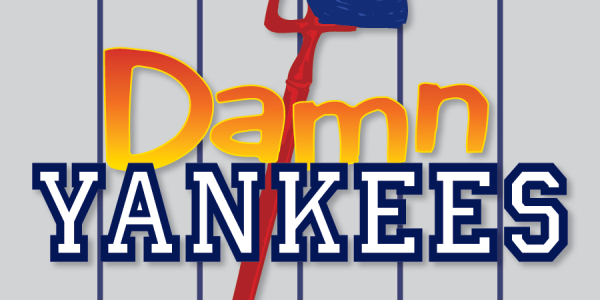 The Mac-Haydn Theatre, celebrated for its spectacular musical revivals, opened its 50th season with the Tony-award winning Damn Yankees. The performance delivered on its promise of outstanding singer/dancers directed (by John Saunders) and choreographed (by Brian Knowlton) to a fare-thee-well.

Damn Yankees first opened in 1955, written by George Abbott and Douglas Wallop, based on Wallop’s novel:  The Year the Yankees Lost the Pennant.  Abbott directed, Bob Fosse choreographed, and Richard Adler and Jerry Ross wrote the music (as they had for Pajama Game).   The producers sought a female dancer for the leading lady and eventually settled on Gwen Verdon, a dancer who had only sung one song in her previous show:  Can-Can.  Bob Fosse took a chance with her, Verdon won a Tony for her performance and they married in 1960.  A 1994 Broadway revival with Bebe Neuwirth was also awarded a best musical Tony.

The show is set in the mid-1950s, during a stretch when the New York Yankees won the American League pennant virtually every year.  In a retelling of the Faust legend, the middle-aged Joe Boyd (Steven Hassmer), disgusted with his beloved Washington Senators’ terrible record, screams:  “I’d sell my soul for one long ball hitter.”  Presto!  The devil—Mr. Applegate (Mark Hardy) arrives amidst a red cloud of smoke, and proposes that he convert the Senators into champions by changing Boyd into young phenom Joe Hardy (Michael Brennan).  Boyd cannot resist this temptation, but he insists on an escape clause that will allow him to return to his normal life and loving wife (Julie Galorenzo) if chooses to do so by the end of the baseball season.  Fearing that Joe will slip through his fingers, Applegate employs his lovely seductress, Lola (Corrinne Turk) to seal the deal.  And will he abandon his wife for the siren Lola?

The production values are top notch, as we have come to expect from the Mac-Haydn Theatre.  The number and style of  period costumes (by Jimm Halliday) are amazing, especially considering that this is only the first show of the season.  The three-piece suits in white or black with touches of red designed by Halliday for Applegate are stunning as are Lola’s outfits.  The lighting (by Andrew Gmoser) creates magical moments from moonlight and stars, to blinking bulbs ringing the ceiling, to the darkness of the denizens of hell.  Musical director David Maglione provides his own kind of magic, with the few instruments sounding like a full orchestra.  Music accompanies actors dressed as movers while they effortlessly relocate set pieces onto and off of the stage, as designed by Kevin Gleason, including an upstage platform representing the Boyds’ home. Saunders and Knowlton keep the action moving from beginning to end, with some thirty performers charging headlong, in and out and through the aisles.

Because the stage is so tiny, the aisles must stay clear, which means the performance cannot begin until everyone is seated in this theatre-in-the round.  Many audience members, some with walkers, canes, and wheelchairs, are transported by bus from senior residences so it takes a good deal of time to seat everyone both at the beginning and after intermission.  This can be a challenge in a show as long as Damn Yankees, running two and a half hours with an additional 25 minute intermission.

While some of the songs have become standards, such as: “You Gotta Have Heart,” and “Whatever Lola Wants,” others, perhaps less well-known, can be rollicking, like the hoedown in “Shoeless Joe from Hannibal, MO,” wonderfully comic (“The Game”) when the players force themselves to think about the game instead of their girlfriends, or moving, as in the ballads “Goodbye, Old Girl,” sung by Hassmer, and “Near to You,” a duet with Brennan and Galorenzo.   All of the singers have strong voices in this production but these three are standouts.

Having seen the original Broadway production of Damn Yankees as a child, I was anxious to return to it after all these years.  But the script doesn’t hold up as well as I remembered:  in this age of #metoo, it is difficult to watch the sexy Lola be foisted on the young Joe.  It is unclear why Applegate tries to undermine his protégé by creating a scandal that seemingly prevents the devil from adhering to his part of the bargain.  And that first act could definitely benefit from some cutting of songs and reprises that don’t further the plot.

But outstanding performances make up for deficiencies in the script:  Mark Hardy is a smart and smarmy devil, setting just the right tone for Applegate;  Galorenzo and Hassmer are a convincing middle-aged couple—the counterpoint in their song “Six Months Out of Every Year” is a joy to see and hear, as Hassmer rages about his team’s loss;  Brennan makes it easy for us to accept him as Joe’s younger self with his combination of enthusiasm and wistfulness;  Corrinne Turk is a fine singer/dancer as Lola;  Doris (Emma Flynn) and her sister (Maggie Eley)  playing neighborhood women as comic caricatures,  are welcome additions to the plot; Gabe Belyeu as Van Buren, the team’s manager and Monk Schane Lydon, as the owner, with his gravelly voice and cigar are a perfect duo; and Megan Hasse as Gloria Thorpe, the reporter, shines.

Look for Funny Girl in June, Mac-Haydn’s next musical extravaganza.  Count on this theatre to do it justice!