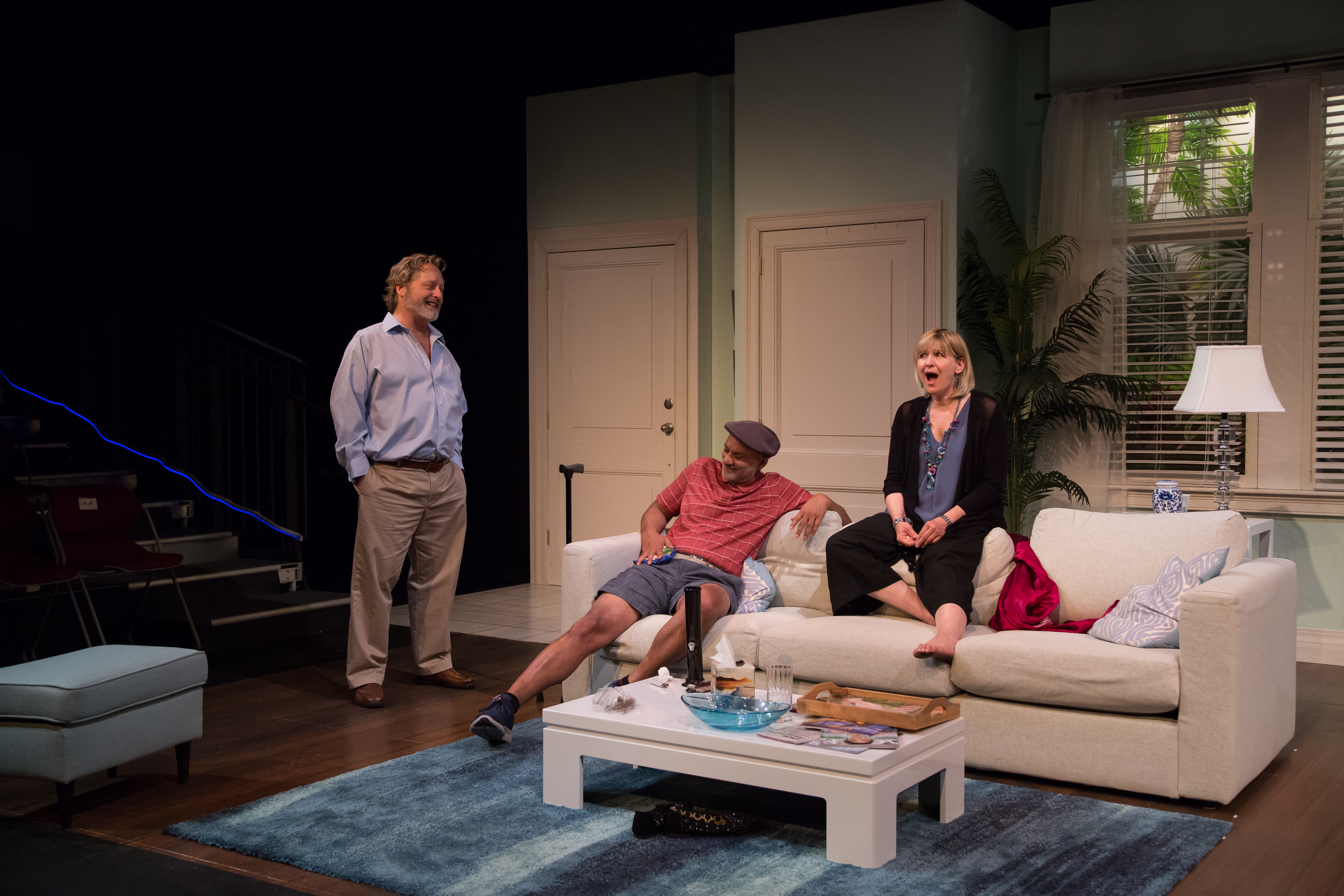 For its first production of the 2018 season, Shakespeare & Company dispenses with kings, queens and wars, instead seeking a perfect marriage between the characters depicted onstage and the viewing audience.  Although, alas, no perfect marriage exists for the three mature characters in Carey Crim’s Morning After Grace, the seniors among the spectators are rewarded as they recognize themselves in almost every line.

This is the New England Premiere of Morning After Grace, first produced by the Purple Rose Theatre Company in 2016 in Michigan and earlier this year by the Asolo Rep in Sarasota.  The play can be classified as a comedy, but one with serious emotional underpinnings about love, loss, and new beginnings.

Angus (Steven Barkhimer), Abigail (Corinna May) and Ollie (Kevin Vavasseur), all residents in a Florida retirement community, gather together for the first time in Angus’ apartment the day after a funeral.  During the course of the play they affect one another often in unpredictable ways.

It is the characters, and their developing relationships, rather than the plot, that drive the action, which is difficult to summarize without giving anything away.  The loose structure does cause some difficulty in that the play sometimes meanders without settling on a focus.  The decision to add an intermission to a play which was seemingly intended to be performed in one act, seems arbitrary.  The playwright holds back and then gradually reveals many of the characters’ secrets, which is skillfully done, but results in the absence of a dramatic climax that leaves us in suspense at the end of the first act.

The mood of Morning After Grace can range from farce, where the characters talk at cross purposes, to tragedy, as they attempt to help one another heal the various hurts that life has dealt them.  Crim is adept at both genres, understanding the pain of an older woman who feels invisible, as well as the joy of reaching an age when you don’t need to remove your shoes at airport security.  Her dialogue is snappy and her use of poetic language and imagery can be lovely, referring to our bodies as a map of our lives, and to the signs we all seek in times of trouble that seem to answer our prayers.

Unfortunately the second half of the play has less humor and contains fewer surprises—not as many balls being juggled–as the playwright tries to resolve the issues raised in the first half.  The head-spinning originality of the beginning becomes more mundane as the play progresses.

The acting and the direction (by Regge Life, who helmed last year’s God of Carnage) are top notch.  In his program notes, Life talks of working “day by day” and “moment to moment,” while Corinna May, in her twenty-seventh season at Shakespeare & Company, describes her process (in THEATRE TALK, hosted by Bob and Sally Sugarman) as breathing, listening, and not jumping to a result.  The depth they have mined manifests itself in the actors’ physicality, emotional truth, and the richness of their silences.  As Abigail, May wordlessly crawls her way out of the awkward situation that opens the play, in a scene that is as convincing as it is comic.  The humor throughout feels organic, never pushed, even as misunderstandings abound.   Angus (Barkhimer) says what’s on his mind no matter who is the subject of his attacks, yet we understand what he’s going through and can still laugh at his wonderful comic timing.  Ollie (Vavasseur) touches us deeply as he faces an identity crisis that he hasn’t come to terms with in 54 years.  While sharing these likeable characters’ sadness, we  can also revel in the hilarity surrounding their bout with marijuana.

The design team provides us with a world that feels absolutely real:  from Patrick Brennan’s modern kitchen, complete with all appliances and a lovely living room with a window facing palm trees outside; to Stella Schwartz’s costumes revealing the lifestyle of the characters who wear them; James W. Bilnoski’s lighting, essential in determining the passage of time, and Iain Fisher’s sound design, including flushing toilets, birds, phones, and passing cars.

Morning After Grace may resonate for some in the audience as did the 1973 hit song Killing Me Softly, in which Roberta Flack described the effect of hearing a singer/guitarist who was  “Strumming my pain with his fingers, Singing my life with his words.”