REVIEW: “The Sound Inside” at the Williamstown Theatre Festival 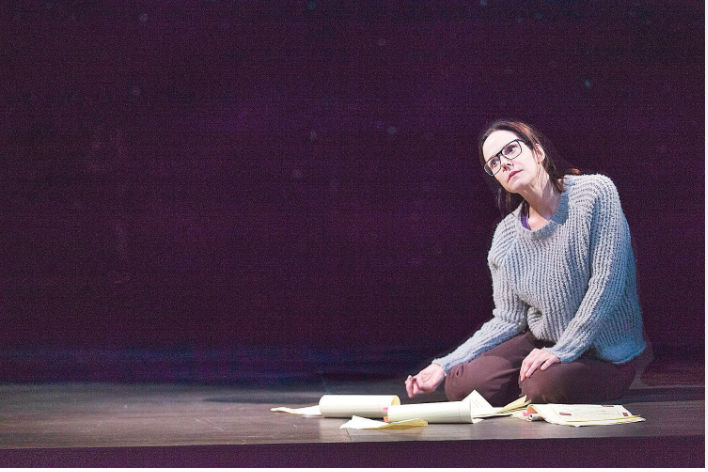 REVIEW: “The Sound Inside” at the Williamstown Theatre Festival

“Fruitful introversion is possible only when there is also a relation to the outside.”  –C.G. Jung

The world premiere of The Sound Inside at the Williamstown Theatre Festival invites us to witness something not often seen on stage: the portrayal of two profoundly introverted people who struggle to find a way to ask for help.

Playwright Adam Rapp (who is also an author, screenwriter, and director with an impressive array of awards for his work) and director David Cromer (who recently won a Tony award for his direction of The Band’s Visit) have accomplished something extraordinary in making theater about two isolated people, a middle-aged Yale professor and a student with a roiling inner life, who come together during a time of personal crisis for both.

We see the story from the point of view of the professor Bella Baird, played by Mary-Louise Parker. From the beginning of her first monologue, one of many addressed to the audience, she had me in her thrall. Her skill at embodying a woman who revels in her solitude is remarkable. While I’ve seen Parker many times in film and on television, this was my first experience seeing her onstage, and though I’ve always enjoyed her work, I really didn’t know what to expect. My admiration increased tenfold. I found her ability to embody this prickly recluse, and to use language and gesture to transmit her feelings about her treasured inner life, quite remarkable.

Playing opposite Parker as the student Christopher Dunn, Will Hochman offers an equally arresting performance. An intensely angry, brilliant young man, Dunn approaches Baird about a novel he is writing. The eremitic student and the cloistered professor cautiously develop an alliance of sorts, and the evolution of their alliance is suffused with jolting revelations.

Scenic designer Alexander Woodward’s revolving set brings us back and forth to Baird’s office and her apartment, among other places, and I was initially taken aback that the person pushing the set was completely visible to the audience. I soon realized that this was an inspired touch for this play about making the invisible visible. David Hyman’s costumes adroitly enhance the actors’ work, and Heather Gilbert’s lighting design is excellent (although there seemed to be a few glitches when I saw the play, I have no doubt they’ve since been corrected). Original music and sound designer Daniel Kluger has gloriously met the distinctive challenges of this play.

Cromer has been quoted as saying, “I was struck by this really intangible, very-difficult-to-grasp idea that watching this play was going to be like reading prose alone in the dark with just a little lamp and a chair by yourself….We’re hoping it’s a slightly new kind of experience in the theater….I think it subverts normal expectations of watching a play.” (From an interview with Benjamin Cassidy, Williamstown Theatre Festival: Thoughts Preside in The Sound Inside, The Berkshire Eagle, June 29, 2018)

Therein lies its triumph. The Sound Inside and its two actors transmit experiences of solitude, introversion, depression, and the innate human desire for connection.