REVIEW: “Coming Back Like a Song!” at the Berkshire Theatre Group 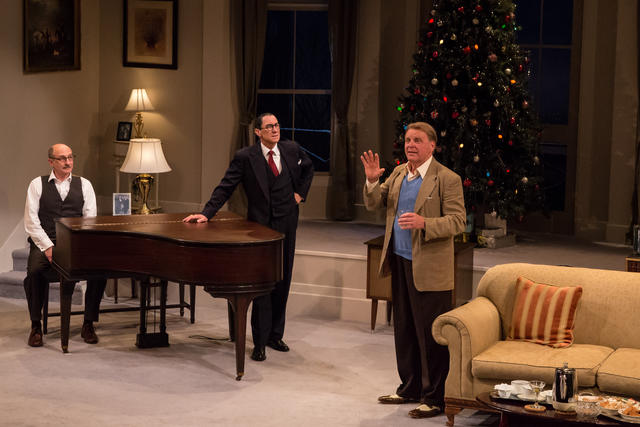 REVIEW: “Coming Back Like a Song!” at the Berkshire Theatre Group

There’s a nostalgic diversion receiving its world premiere at Berkshire Theatre Group’s Fitzpatrick Main Stage in Stockbridge, MA.  Coming Back Like a Song! By Lee Kalcheim is a play about Irving Berlin, Harold Arlen and Jimmy Van Heusen, three giant composers on the Broadway and Hollywood stages of old.  Though there is biographical information and moments of emotion throughout the work, the show is basically a revue of wonderful music from the mid-20th century.  What’s so bad about that?

On Christmas Eve 1956, Berlin (David Garrison,) Arlen (Philip Hoffman) and Van Heusen (David Rasche) gather at Berlin’s New York townhouse after an ASCAP (American Society of Composers, Authors and Playwrights) meeting to discuss the onslaught of rock ’n’ roll into popular music, in particular, Elvis Presley,   Berlin puts on a 45 rpm (which he disdains because they’re small with a big hole in the middle) for a cut of Presley’s Hound Dog.  Van Heusen is a proponent of the new music because things change and you have to change with them.  The other two are not happy with the state of things… “Where’s the music?”

The three of them go to the piano singly or together and run through myriad songs they’ve written for the theatre or movies or just to write them.  The first, of course, is Berlin’’s Alexander’s Ragtime Band which catapulted him to international fame as a relatively young man.   Arlen’s Blues in the Night, which his cantor father persuaded him to sing in the synagogue, sees the three of them harmonizing. What’ll I Do? (Berlin,) Moonlight Becomes You (Van Heusen,) Swingin’ on a Star (Van Heusen,) Somewhere Over the Rainbow (beautifully sung by Hoffman’s Arlen, who composed it) Cheek to Cheek (Berlin,) Lydia (Arlen) and a host of others.  With most songs there are quick anecdotes about the song, the show, or the star who performed it.

We do learn something about their characters and their lives.  Irving’s first wife died five months after they were married; he had a son die at three weeks on a Christmas Day; his current wife, Ellin, a devout Catholic, was disowned by her father for marrying him, Berlin being Jewish. When the Depression hit, Berlin supported Ellin’s family.  Garrison looks like the brilliant and feisty Berlin, but his voice is much better.

Harold’s wife Anya has been in various sanitariums for several years.  He is devoted to her and shares this with his friends.  He has purchased a Christmas tree and is planning to pick her up the next day to bring her home for a short stay.   A phone call to the institution this evening to speak with her brings him the news that she’s not well enough to travel – again.

Frank Sinatra owes his life to Van Heusen who saved him after the singer slit his wrists.  For payment Sinatra expects Jimmy to be at his beck and call and to fly to California tonight to play the piano for his Christmas party.  Van Heusen, who flies his own plane, politely refuses since it is snowing east of Chicago.  He is a womanizer.  He doesn’t marry until he is 56 years old.  He says, “I write emotions but I can’t feel them.”

The foundation of Kalcheim’s script is the music; the plot material with occasional disagreements is close to being filler that more than smacks of gossip, but interesting gossip.  We discover things about the composers and others whose lives they have touched or vice versa.  The dialogue is literate and certainly amusing.  Gregg Edelman’s direction revolves around the piano with several short scenes at the coffee table where the friends sip several martinis.  He does give the characters energy and identification as also defined by David Murin’s costumes.

Randall Parsons’ set is clean and looks like the home of a wealthy family.  BTG’s main stage may be too large for the intimacy the show requires.  Oliver Wason’s lighting is subtle except for those moments when the performers are in a spotlight rather than the general lighting of the living space.  The musical director and pianist Daniel Mollett has coached his three singers to interpret the songs in the style of their era.

Profundity is not in play in this show, but what is there is the nostalgic warmth of a n irretrievable time in American culture creates an enjoyable production!