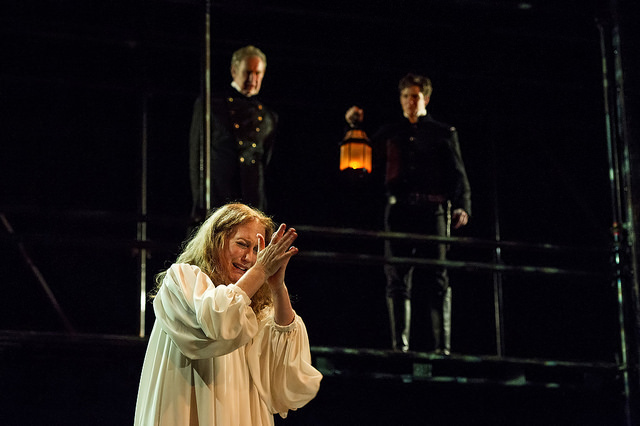 Imagine a production of Macbeth without the witches. No “When shall we three meet again?” No “Double, double toil and trouble: Fire, burn; and, cauldron, bubble.” No cauldron for that matter; no murderers to kill Banquo or Macduff’s family—only blood magically spurting from their chests. These are some of the many alterations imposed on the text of Macbeth now playing at Shakespeare & Company in their two- hour version of Shakespeare’s shortest tragedy.

Under the direction of Melia Bensussen in her debut with the company, lines and scenes have been cut, added, rearranged and with a small cast of only nine named actors supplemented by members of the ensemble, several roles have been doubled, sometimes leading to difficulty identifying the characters. This especially true in the case of the female Banquo (Ella Loudon), fresh from her fine work as a male character in last year’s Cymbeline.

Bensussen explains in a Director’s Note that although an Elizabethan audience would regard witches as “demonic agents,” today Wicca beliefs are celebrated in a positive way, so we would not be frightened of them. As a substitute, there is one actress (uncredited), all in white, who prowls around observing the action, calling forth thunder and rain (yes, there literally is rain on the set) with a gesture, and speaking a few artificially amplified (otherworldly) predictions. Inspired by Edgar Allan Poe’s “The Tell-Tale Heart,” in lieu of witches, Bensussen appeals to incorporeal, psychological terror. Costumes (by Olivera Gajic) are set in Poe’s time—late nineteenth century. Bensussen’s concept is for Macbeth to confront the audience, forcing us to see the results of his (and our) unbridled imagination, leading him (and perhaps even us) into darker and more evil deeds—“that’s the ghost story of Macbeth this summer.”

This approach may explain the repetition of the banquet scene, which ends the first act and then begins the second. Banquo, whose murder has recently been arranged by Macbeth (Jonathan Croy) and executed by unseen hands, appears as a ghost at a (sparsely attended) banquet where Macbeth and his wife (Tod Randolph) have greeted their guests. The ghost is visible only to the audience and Macbeth, who becomes unhinged. Following intermission this scene is repeated without the appearance of Banquo, except in the mind of Macbeth. Is this Bensussen’s attempt to underline the terror caused by the guilty King’s imagination? One wonders why the director takes the time to repeat these lines when she has cut
so many others.

Make no mistake: there is much to admire in this production. The design team does an expert job creating the sense of urgency Bensussen is seeking. Tension is heightened thanks to the impressive lighting design of Dan Kotlowitz, the powerful sound design by Brendon F. Doyle, and Cristina Todesco’s Japanese-style hanamichi and other effects. Used in Kabuki theatre, this is a raised platform running from the back of the
theatre to the stage. In this case, Todesco runs it from the stage towards the downstage audience, bringing the action as close to them as possible, serving as a platform for scenes, a battle arena, the banquet table and other unusual functions. A two-story window on the stage allows for rain to fall behind it, which turns red as Macbeth is more and more steeped in blood. Todesco’s use of ladders and climbing poles enable the
athletic actors to move easily from one level to another and Bensussen uses every possible exit and entrance in the theatre, creating a feeling of surprise because we never know when or where actors will suddenly appear. Ted Hewlett, the fight choreographer or “violence designer” provides us with the only violence we see in the production: an extended and very exciting ultimate duel between Macbeth and Macduff, unencumbered by other characters.

The major roles, as we have come to expect from Shakespeare & Company, are filled by consummate actors, practiced in the delivery of Elizabethan lines. Jonathan Croy, in the title role, is above all absolutely clear in his intentions—his monologues are delivered straight out to the audience, among whom he sometimes perches, as he takes us with him on his journey from a man “too full o’th’milk of human kindness” (his wife’s
critical description) to a monster. Nigel Gore plays two characters who couldn’t be more different: old King Duncan and the drunken porter, and is equally adept at both. To say the choices he makes as the porter are unexpected is an understatement, but his performance, involving some lines
definitively not in the text, is a highlight. Another highlight is the scene where Malcolm (Deaon Griffin-Pressley) through misdirection tests the loyalty of Macduff (Thomas Brazzle).

The performance of Tod Randolph as Lady Macbeth is puzzling. It has always been a joy to see her work with the company, but her interpretation of this character disappoints. It feels as though the Strasberg school of realistic acting has intruded on this character, robbing her of power, persuasiveness and seduction. Randolph’s most effective moment is the sleepwalking scene, as though when the character’s mind
snaps, the actress is free to let herself go.

For those who are not purists, this production is enjoyable, fast- paced, and stimulating. But for those who prefer Shakespeare’s text as written, it can be a challenge.