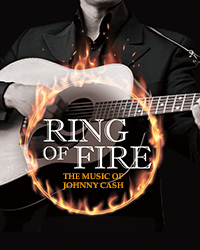 There are rare occasions when audience hooting, hollering, and foot-stomping add to the enjoyment of a night of theater, and Ring of Fire: The Music of Johnny Cash, which just opened at the Capital Repertory Theatre, is a sterling example of just such a treat.

One of the reasons this show is so delightfully infectious is that instead of relying on the common conceit of a musical tribute show in casting an actor in the role of the singer (a risky undertaking when the artist is fresh in the audience’s memory), Ring of Fire has a cast of six singing, acting musicians, five men who at various times represent Cash but more often celebrate his music in their own way, and one women, who sometimes represents June Carter Cash, but for the most part sings, dances, and plays the hell out of the music.

Each of the cast members (Bill Scott Sheets, Kurt Zischke, Erikka Walsh, Jacob Shipley, Paul Wyatt, and Josh D. Smith, in order of appearance) has the vocal chops to take on a wide variety of songs that range from country to gospel to well-known compositions of Cash and a few other songwriters. Their voices are superb, whether performing such novelties as Dirty Old Egg Sucking Dog and Flushed From the Bathroom of Your Heart, or celebrated Cash standards like Folsom Prison, Going to Memphis, I Walk the Line, and Ring of Fire.

What’s more, these sensational performers  accompany themselves on instruments ranging from guitars and violins to washboard and spoons. The band (Joe Barna on drums; Patrick O’Connell on bass and fiddle; and musical director Josh D. Smith on keyboards, autoharp, melodicas, Andes flute, and accordion) that supports them is top notch.

Freddy Ramirez once again provides splendid choreography, and to a person, the performers (especially Walsh, who was also Dance Captain) dance nimbly and with seemingly bottomless exhilaration. Barry Steele’s clever set and projection design gracefully assists in moving the action along with imagery that enhances the mood and subject of each song. Rider Q. Stanton’s sound design and Mike Riggs’s lighting design do a superlative job intensifying the material. Kudos, too, to Howard Tvsi Kaplan for his solid, becoming costume design.

Director Maggie Mancinelli-Cahill has cheerfully mobbed the stage with so much talent and gusto that I could swear I felt the entire house shake by the time the ensemble closed the show with the uproarious I’ve Been Everywhere. I unreservedly recommend that you join the fun.

Opening night includes live music by The Insolent Willies in the café at 6:30 p.m., and complimentary post-show champagne and dessert from Bella Napoli Bakery. The Chef’s Table performance, on Tuesday, July 17, includes complimentary light fare from The Hollow Bar + Kitchen, for ticketholders, in the lobby, beginning at 6:30 p.m.

Post show discussions with representatives from Ring of Fire will follow evening performances on Wednesdays, July 18 and 25.

I Still Miss Someone: A Johnny Cash Remembrance, with roots scholar and multi-instrumentalist Michael Eck discussing Cash’s legacy, will preface the Saturday, July 21 matinee. The talk is included with show ticket and begins at 2 p.m.

The Sunday, July 29 matinee is preceded by a Behind-the-Scenes event, which features a light continental breakfast for ticketholders, and discussion led by Mancinelli-Cahill. Food service begins at 12:30 p.m., with the presentation following from 1–1:30 p.m.

Ring of Fire: The Music of Johnny Cash is part of the 2018–2019 Season at Capital Repertory Theatre and is sponsored by E. Stewart Jones Hacker Murphy, LLP.