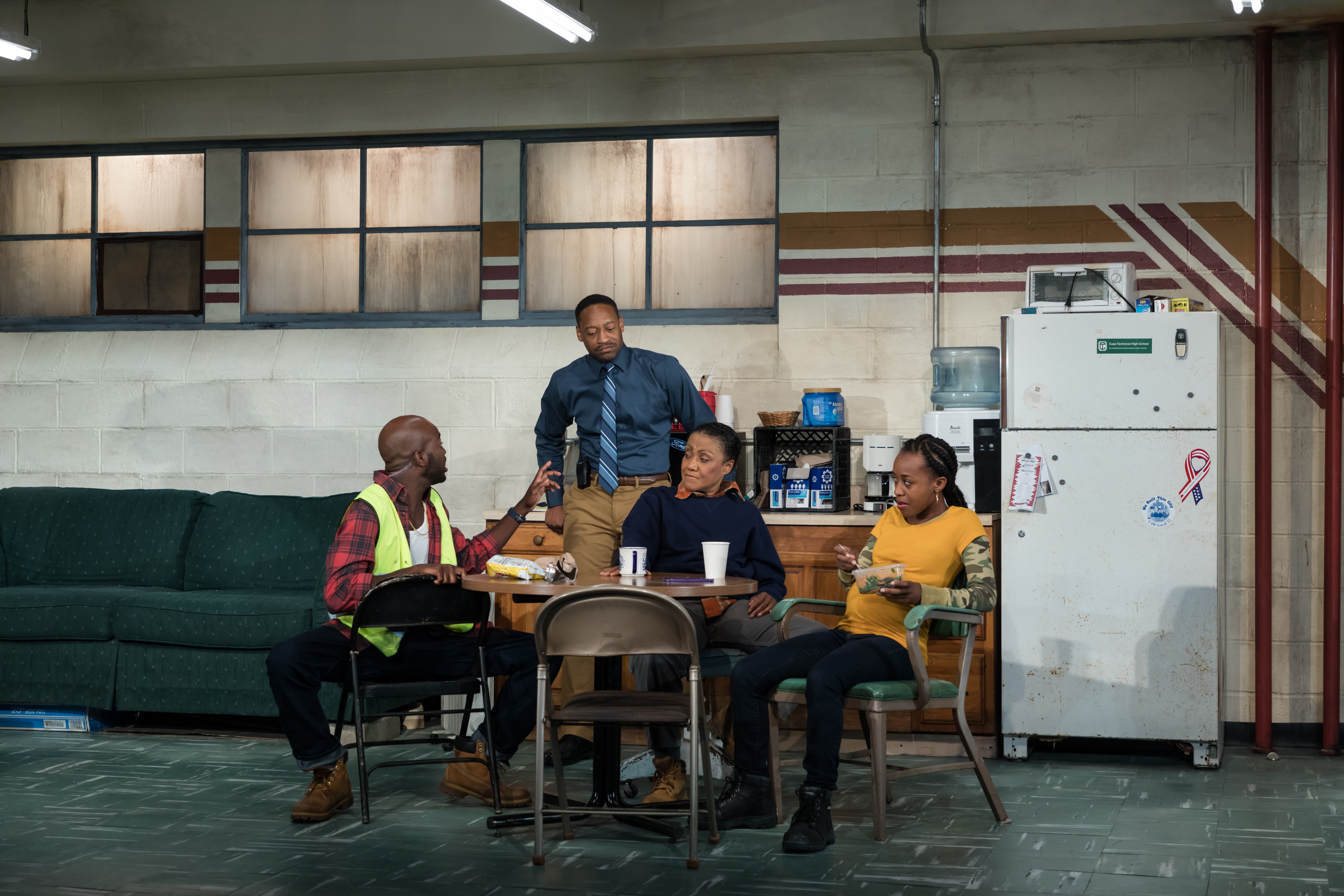 The only way to truly understand the impact of a crisis is to put a face on it, to humanize it, to make it accessible on a feeling level. We may read about current events, but as ghastly as it is to read about families being torn apart in modern-day America, seeing photos of grief-stricken victims and hearing the cries of terrified children makes us feel the urgency of the situation, and we’re able to empathize. This is what Playwright Dominique Morisseau has accomplished with Skeleton Crew, the third play in her widely celebrated Detroit Project*, now running at the Dorset Theatre Festival.

It’s 2008, and we find ourselves inside the breakroom of a Detroit auto plant–the last exporting auto plant, to be precise. A decade later, those of us in the audience already know about the collapse of the automobile industry and the devastating effect of its bankruptcy on the city. But in this intimate setting, we experience its effect on the lives of four individual African-American workers who have a long history with this workplace. Faye (Brenda Pressley) the union representative who has worked for the company for 29 years, looks forward to retiring in a year, when she will be able to collect her pension. A conflicted young man who strives to determine what he must do to survive at his job, Dez (Leland Fowler) hopes to eventually open his own repair shop. Shanita (Mirirai Sithole), a pregnant young, single woman, prides herself on her independence and depends on her employee benefits. Plant manager Reggie (Gabriel Lawrence) finds himself in the midst of a painful struggle: as the boss, he knows that the plant will shut down within a year. He’s responsible for firing staff, yet fiercely identifies with the workers, and feels especially responsible for Faye, who was very close with his late mother.

The cast is excellent. Although I initially had some difficulty understanding all of Pressley’s dialogue because she speaks very rapidly, I soon grew accustomed to it, and realized that it fit her character very well. Faye is a powerful, passionate woman, protective of the younger workers while having a deep connection to Reggie, whom she’s known most of his life. He is particularly concerned about Faye, and confides to her early on about the plant closing, putting her in a very difficult position. As the union representative and a woman with strong ethics, how can Faye find a way to protect the people she represents without betraying Reggie? Lawrence succeeds magnificently in transmitting Reggie’s frantic efforts to balance his responsibilities while safeguarding his employees.

Fowler and Sithole deliver exceptional performances as well. Fowler’s seething sense of betrayal and his search for a way to flourish are palpable and moving; Sithole’s sweet young woman desperately looking for reasons to cling to hope is deeply affecting.

All of these people are superbly defined by playwright and actors, and throughout, they are real and consistently engaging. Director Jade King Carroll’s direction is well pitched, well paced, and seems perfectly suited to this heart-wrenching but ultimately uplifting play. Kristen Robinson’s set design marries exceedingly well with Joey Moro’s projection design, presenting us with a naturalistic factory breakroom, complete with lockers, a table, refrigerator, and a microwave under an enormous projection screen. Between scenes the projections of an assembly line come alive, and the contrast of the human drama and the bleak, mechanical repetition is vivid and graphic. The costumes (Alice Tavener), lighting (Michael Giannitti), and sound (Karin Graybash) all skillfully complete the naturalistic setting.

Skeleton Crew is an important addition to the pantheon of contemporary American drama, and the Dorset Theatre Festival’s production is a winner.

The box office may be reached by calling (802) 867-2223 ext. 101, Tuesday through Saturday, 12 – 6 pm. For more information, or to purchase subscriptions and tickets online, visit www.dorsettheatrefestival.org.