REVIEW: The Hunchback of Notre Dame” at the Mac-Haydn Theatre 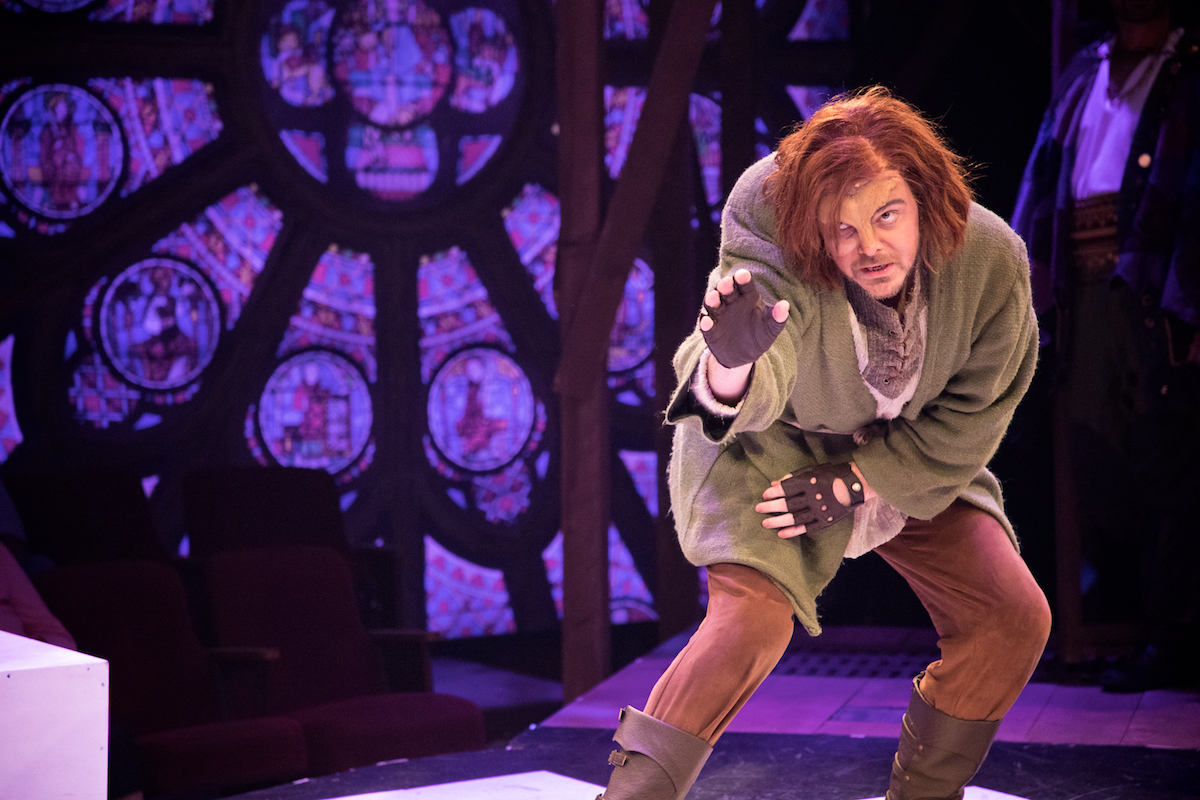 REVIEW: The Hunchback of Notre Dame” at the Mac-Haydn Theatre

It’s late July and the theatre scene is hopping! None of our regular Berkshire On Stage critics was able to fit a trip to the Mac-Haydn to see The Hunchback of Notre Dame into their schedule, but luckily Lisa Jarisch, a longtime subscriber to the Mac, agreed to share her impressions of the production. A true theatre lover, Jarisch holds a BA in English from Mount Holyoke College and has experience behind the scenes as a stage manager.

Berkshire on Stage: This is a new musical for the Mac-Haydn, and for the region. In fact, it was only just licensed for production in 2016. Have you ever seen the 1996 Disney animated film or read Victor Hugo’s 1831 novel on which it was based?

Lisa Jarisch: I am totally unfamiliar with the Disney film, and have but a vague recollection of reading the original “back in the day” when classics were a regular part of high school English curriculum. The basic story, however, has somehow worked its way into my English major consciousness…as in the name of Quasimodo always rings a bell. I am also old enough to recall the Charles Laughton film version…which James Benjamin Rodgers obviously channels in Quasimodo’s costume and make-up.

BoS: While it bears the Disney name, this is not a happy fairy tale. Tell us the plot of the show.

Jarisch: “Half-made” and orphaned, Quasimodo (James Benjamin Rodgers) is raised in solitude in the bell tower of Notre Dame Cathedral in Paris, and in servitude to the (im)pious Dom Frollo (Quinto Ott), whose intense hatred for the Gypsies who infest the street of Paris grows stronger during the Feast of Fools, when the city is turned “Topsy Turvy” and passions given free rein. Yearning to experience what he sees “Out There,” Quasimodo gives in to the urgings of the lesser angels…the stone gargoyles who have been his only friends in the tower. The stone saints who also share his world are less successful in their persuasion.

Crowned King of Fools during a wild night of debauchery, Quasimodo is revealed as the hideous, hump-backed and damaged “creature” his uncle has made him believe he is. As he us mocked, ridiculed, and attacked, the gypsy girl Esmeralda (Laura Helm) rises to his defense, offering kindness and a sip of water, earning Quasimodo’s undying, and ultimately unrequited, love.

Dom Frollo’s hatred for the gypsies reaches a crescendo and he orders his Captain of the Guard, Phoebus (Michael Brennan), to hunt down Esmeralda, for whom he is developing a most unholy passion, blaming her and the entire band of gypsies for the corruption of Quasimodo, who is no longer his willing slave. The ensuing pursuit changes everyone’s lives forever.

BoS: These sound like very adult themes, closer to what Victor Hugo wrote than what Disney wrought. What age group would you recommend this show for?

Jarisch: This is NOT the Disney fairy tale version. Unrequited love, ever-increasing lustful passion from a clergyman, deep-seated ethnic prejudice rearing its ugly head, mob-mentality bullying, emotional and sexual awakenings in a man physically, mentally and emotionally repressed his whole life. This is a show not likely to be enjoyed or understood by children under 12.

BoS: What stood out to you about this production? What were the highlights?

Jarisch: This is a glorious highlight of the Mac-Haydn’s 50th season, starting with the stunning vocals from each of the three leads. Ott, as the cruel, misguided, lecherous, and sanctimonious Dom Frollo, brings the house down with every number, none more so than the spine-tingling “Hellfire” at the end of Act I. His deep, rich baritone almost shatters the walls of the cathedral. He is a force to be reckoned with in both character and voice.

Helm brings a hardened yet vulnerable quality to her role as Esmeralda, while James Benjamin Rodgers—a personal favorite since his Jekyll and Hyde at the Mac several years ago—plays Quasimodo with just the right amount of servility, becoming the classic Tragic Hero as he develops self-awareness. His vocals are true and strong and manage to express both his recognition of his own deformity in the eyes of the world, and his frustration with the world that cannot see the man under them, so to speak. His denunciation of the stone saints and sinners who have been his companions, confidants, and conscience since birth in “Made of Stone” is no less a show-stopper than Ott’s “Hellfire.”

Special kudos to Gabe Belyeu—another personal favorite for years—in the role of Colpin, King of the gypsies, who serves as narrator to all the action swirling through Paris. He is at times both bold and brash, while counseling Esmeralda to flee as all is lost, he nonetheless orchestrates the gypsy crew to ever-increasing levels of hostility against the clergy, while taking a stand for the rights of all to exist in community, if not churchly Communion.

Brennan as Phoebus holds his own vocally against the truly Broadway-worthy voices of Ott , Helm, and Rodgers. His Phoebus is a lightly-sketched portrait of an Army officer mired in the throes of self-promotion and service to the church who is ultimately transformed by the strength of love, truth, and justice.

BoS: Were there things that bothered you? What would you have done differently?

Jarisch: I had some issues with the use of the spotlights in Act II. I was distracted from the stage action and the accompanying vocals by poorly focused and off-center lighting.

BoS: In some productions, Quasimodo is portrayed as being deaf and speaks in sign language. Was that the case in this production? If so, how did it work?

Jarisch: Quasimodo is clearly challenged in his communication skills; in this production Rodgers brings a halting, sometimes single-syllabic cadence to his speech. It’s made clear in his second encounter with Esmeralda that he is deaf, and able to read lips. Obviously, his singing is not affected by this impediment—Rodgers’ pure and strong voice is more than equal to the musical numbers set before him.

BoS: Lyricist Alan Menken and composer Stephen Schwartz felt that having a live choir on stage was integral in achieving the full-bodied sound they had crafted for the film. Did the Mac-Haydn production go that route?

Jarisch: They most certainly did! Choirs of saints and sinners, hooded monks, and gypsy travelers all pay homage to the classical Greek chorus, enhancing the depth of the emotions swirling between the characters and through the plot. At times, the sheer volume of the large ensemble chorus made it difficult to clearly understand the lyrics, but the production was definitely the better for their presence.

BoS: Like many theatrical recreations of animated films, there are certain effects that are difficult, if not impossible to reproduce, even for large theatres. The Mac-Haydn is a small house and shows are performed in the round, meaning that everything is visible to the audience. Did they attempt some of the big effects?

Jarisch: As I have been for years, I continue to be amazed by the ingenuity and creativity shown when the Mac does shows which typically call for elaborate stage effects clearly not possible on a small theatre-in-the-round stage. I am still awe-struck by the technical quality of “Les Miserables” several years ago – the striking of the barricades at the top of Act II was stunning. Here John Saunders again delivers a beautifully directed piece, with choreography by Sebastiani Romagnolo more than up to the task of making gypsies, clergy, hunchbacks, gargoyles, and saints move in unison.

In Hunchback… set and lighting designer Andrew Gmoser succeeds in capturing the essence of the soaring grandeur of Notre Dame Cathedral, the gypsy-filled streets of Paris, and the lonely yet exhilaratingly open bell tower “At the Top of the World” which ultimately provides a sanctuary for the doomed lovers. The stained-glass panels surrounding the stage are stunning; when backlit they truly bring the cathedral alive. A set of large, oversize bells descends upon the stage at the appropriate moments.

Of particular note is the aerial work performed in “Topsy Turvy.” For the second time this season a large hoop descends from the rafters, allowing the performance of lithe, undulating aerial acts which highlight the gypsy world gone berserk on the Feast of Fools. I was impressed when such goings-on graced the stage in Cabaret earlier this season, and I was equally impressed this time.

BoS: Tell us about the physical production – lights, sound, costumes – did everything work together well?

Jarisch: Alison Zador’s gypsy costumes were perfect – silky, flowing, vibrant representations of their outcast, traveling lifestyle. Quasimodo is virtually the expected stereotype of the title role – hump-backed (I SWEAR his hump moved between Act I and II, but then I realized this was NOT Young Frankenstein!), a dragging limp, and a grotesquely-made up face resembling the gargoyles standing stoic watch in each corner of the bell tower set. The orchestra, under the batons of David Maglione and Jillian Zack,  complemented rather than competed with the vocal performances, an issue I’ve had with some previous productions, where it seemed that the orchestra and singers were engaged in a duel of decibels.

BoS: Any concluding words to help our readers decide if this is a show they want to see?

Jarisch: Even without season tickets, the allure of seeing Ott, Rodgers, Helm, and Belyeu would have had me running for the box office. They, and the ensemble cast, did not disappoint. While the score is certainly not one to remember – I can’t honestly say I left the theatre humming – nor are any of the songs likely to become standards on the karaoke scene – the music and lyrics by Alan Menken and Stephen Schwartz (Godspell, Pippin, Wicked) captures the essence of the work, from the unrequited love of Quasimodo, to the doomed love of Esmeralda and Phoebus, to the sordid ecclesiastical lusts of Dom Frollo. I am glad the Mac-Haydn has given the region such a fine introduction to this piece.

Admittedly I would listen to Ott and Rodgers sing the Chatham phone book, but this is a show worth the price of admission, and as usual, there is not a bad seat in the round-stage house.

For showtimes and more details please visit www.machaydntheatre.org or call the box office at 518-392-9292