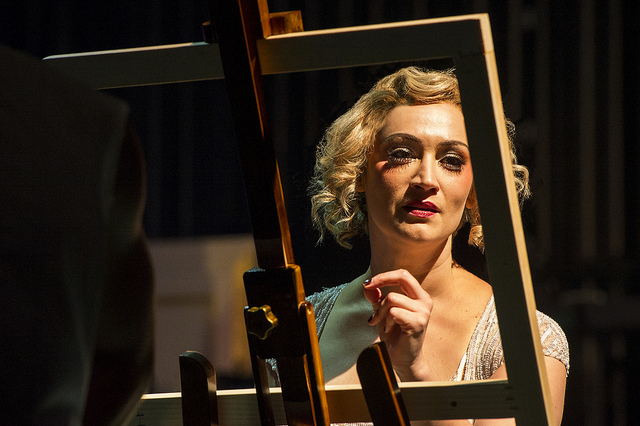 There was woman, born to a Jewish father and Catholic mother in Warsaw, Poland, in 1898.  In Petrograd Russia, she married a wealthy Polish lawyer who was arrested in the midst of the Russian Revolution in 1917.  After he was freed they journeyed with their infant daughter to Paris where she became a celebrated artist who led a hedonistic life style typical of the French artistic community in the 1920’s.  Her controversial yet popular work was identified only by her last name.  She is the central character in the world premiere musical Lempicka at the Williamstown Theatre Festival.

This production has the same driving music and narrative as the larger-than-life style of Evita, Les Miserables and others of the 1970’s and 80’s.   Lempicka’s life story is as dramatic as Eva Peron’s and as dark as Jean Valjean’s and, perhaps, more touching.

After Tamara de Lempicka (Eden Espinosa) extricates her husband, Tadeusz Lempicki (Andrew Samonsky,) from prison, their life in Paris is hard.  Since he does not want a menial job, which he believes is below him, she works as a waitress.  She finds herself becoming fascinated by painting and takes lessons until she develops a form that complements her personality. Her interpretation of art deco utilizes bold, clashing colors in dynamic, highly stylized portraits and nudes. She paints a series using her daughter Kizette (Alexandra Templer) for her model.  As her fame increases and she becomes more involved in the unconventional side of the art world, she has numerous affairs with both men and women, some of whom are subjects of her work.  In particular, Lempicka has a lengthy affair with a street prostitute, Rafaela, played by Carmen Cusack.  Divorced by Tadeusz, she marries, her lover, Baron Kuffner (Nathaniel Stampley.) In 1939, with the growing power of the Nazis they emigrate to America.  Her life covers the 20th century and historical moments become an integral part of the plot.  The show is not totally factual, while it follows the outline of her life.

Ms. Espinosa is the core of the production and she makes it pulsate.  Her energy drives the show and her voice is strong.  In addition to her vocal responsibilities, her acting is nuanced and intelligent.  Her growth from a young bride to a tough, self-protective woman who revels in international fame is convincing.  Cusack’s Rafaela is hard, fearing to let her guard down as she falls in love with Lempicka.  Hers is also a layered performance and her voice is a match for Espinosa‘s, especially in a touching duet –  “Stillness.”

The rest of the cast fulfill their roles with well-rounded characterizations, though the book by Carson Kreitzer doesn’t fill in their backgrounds as specifically as she does with Espinosa and Cusack.  Worth noting are Samonsky as Lempicka. Nathaniel Stampley (The Baron) Rachel Tucker (The Baroness) who sings a heartfelt “The End of Time,” Natalie Joy Johnson who has a rousing number as lesbian bistro owner Suzy Solidor, and Steven Rattazzi as a self-proclaimed art expert who reviles classic art.

Director Rachel Chavkin’s (Natasha, Pierre & the Great Comet of 1812) staging and the choreography by Raja Feather Kelly are virtually inseparable with one form flowing into the other.  There is a great deal of movement lending energy to the various scenes.  The cast sets props, furniture, and rovers (spotlights on rollers) within dance numbers and dialogue scenes.  The choreography is very stylized, certainly not what is seen in a conventional musical.  Matt Gould’s music is redolent of the blockbuster musicals of the 70’s and 80’s and there is a lot of it.  Kreitzer’s book is over-stuffed and her lyrics are occasionally repetitive.

In designing the set Riccardo Hernandez opens up the entire stage, including the wings, to create a larger world for Lempicka’s journey.  The set is minimalist with no permanent structures; everything is moved on–and offstage by cast members.  The immense number of Monica Levi Blanco’s costumes are evocative of the various eras depicted… many, especially the women’s clothes, are colorful.

Bradley King’s lighting highlights the dramatic qualities of the myriad scenes.  The strip lights in back of the upstage cyclorama change the emotional tones in a flash.  The rovers, which are moved freely around the stage, focus attention on the actors.

This is probably a show that people will love or spend their time nit-picking and there is a lot to pick at considering it runs for three hours.  It needs a lot of cutting cutting cutting.  Despite this, Lempicka is an exciting theatrical experience.