REVIEW: “A Quiet Place” at Tanglewood 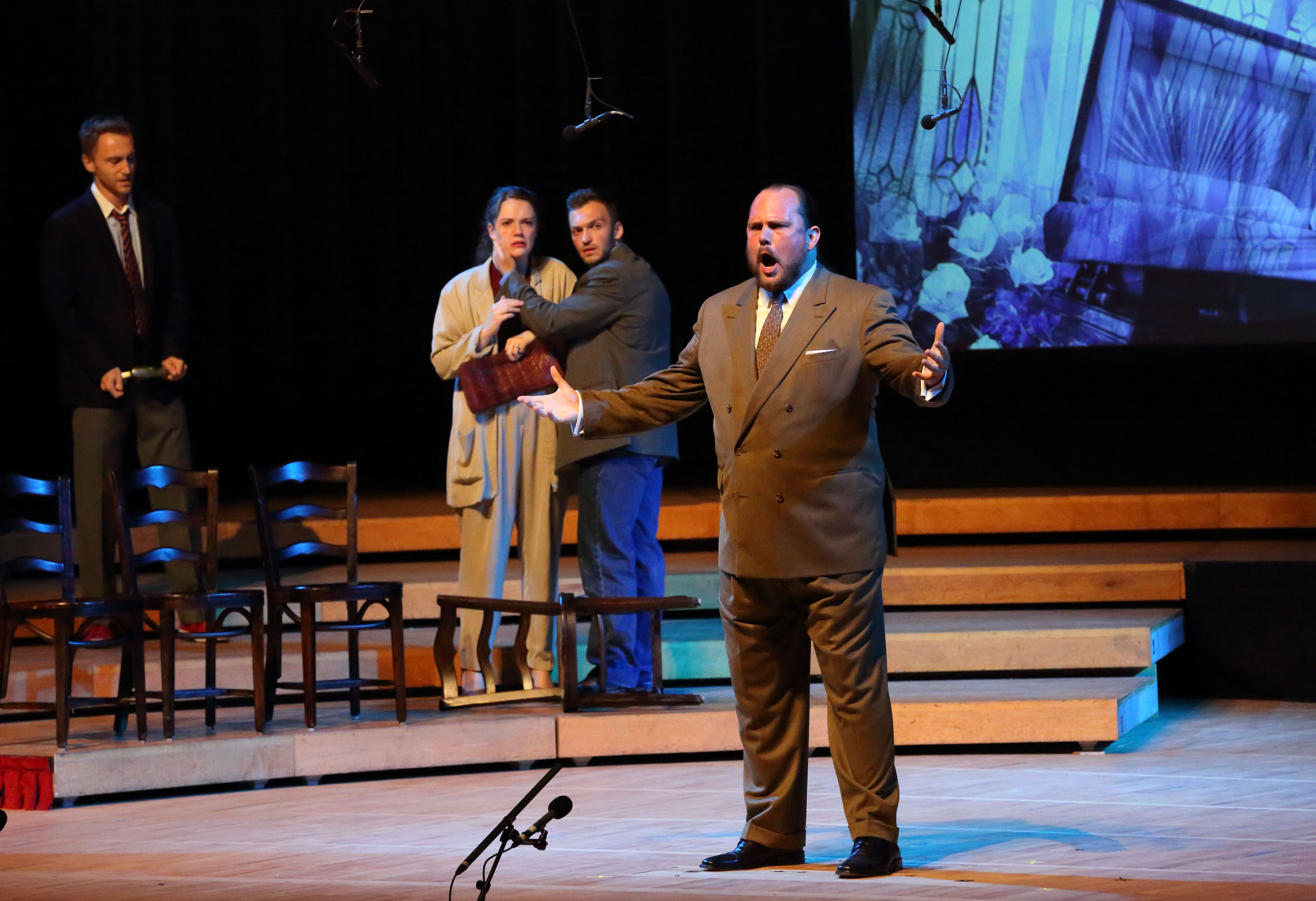 REVIEW: “A Quiet Place” at Tanglewood

The best way to appreciate Leonard Bernstein’s 1983 opera, A Quiet Place, is through the music. At Tanglewood last week, this infrequently performed work was given a spirited defense by the Tanglewood Music Center Orchestra and Vocal Fellows under the baton of Stefan Asbury, in a 2013 version with reduced orchestration. Legendary Bernstein protégé Michael Tilson Thomas was in the audience, a measure of the significance of the production.

Musically, the Tanglewood performance was a rousing success. The orchestra performed beautifully, and the singers were uniformly strong. Though often far less accessible than Bernstein’s beloved musical pieces such as West Side Story and Candide, the score to A Quiet Place reveals a composer at the height of mastery and maturity, a superb craftsman, confident in lyrical and dissonant styles alike. As theater, A Quiet Place is deeply problematic, and this Spartan production — a set consisting of some risers, chairs, and projection screens — did little to overcome its flaws.

The opera was written in collaboration with the young librettist Stephen Wadsworth, after a rather pronounced dry spell in the late seventies and early eighties, and thirty-two years after Bernstein’s successful Trouble in Tahiti, to which A Quiet Place is a kind of sequel. “Tahiti” is a spare and darkly humorous portrait of postwar consumerist America. An all-American, outwardly successful couple, Sam and Dinah, confront the emptiness of their lives and marriage, finding refuge in a fictional fantasy movie, called “Trouble in Tahiti.” Along the way, a number of characters are referred to but never seen, including a son, Junior, Dinah’s psychiatrist, and Sam’s business partners.

A Quiet Place joins Trouble in Tahiti’s Sam thirty years later, when Dinah has died in a horrific car accident (illustrated, as much in the production, by a desultory projection). At her funeral, we are introduced to Junior, a daughter, Dede, and her husband Francois, who is also Junior’s not-too-secret lover, along with the unseen minor characters from “Tahiti.”

The family is a rogue’s gallery of 1980s dysfunction, and Wadsworth, presumably with Bernstein’s blessing, layered the plot with intimations of madness, incest, homophobia, psychological intrigue and just plain dyspepsia. The libretto plods along with enigmatic pronouncements (“Cake and friends we choose with care”; “Lost time is never found”; etc.) and references to “Tahiti.” The title phrase, “a quiet place,” is from Dinah’s aria in the earlier work, where she dreams of an escape from her unhappy life. The dialogue is peppered with nonsense and Godot-like repetitions.

Contrast this with Trouble in Tahiti’s lithe libretto and you begin to see the problem with A Quiet Place: It occupies an entirely different headspace from its predecessor, and the attempt to bridge the chasm feels forced. Small wonder that attempts were made to fold Trouble in Tahiti into A Quiet Place as a second-act flashback, in order to make more sense of the story, but those versions have largely been abandoned.

Despite the family machinations, as four alienated and disturbed people try to find a way forward, more visceral drama takes place in the Bernstein score – in his soul? – than in the opera. Essentially, how could Lenny not be Lenny? A man of deep passions and longing, self-doubt and grandiosity, Bernstein connected as a composer when he gave reign to his deepest feelings. It was difficult not to experience A Quiet Place as a struggle with himself.

The music is among the most difficult Bernstein ever wrote, frequently jagged and atonal, especially in the prologue and first act. As precise and technically brilliant as it is, it sounds like a million other composers of the last thirty-five years. One strains to hear a trace of Lenny.

Suddenly, as the opera progresses, the music loosens up and Bernstein reaches a sublime level of music-making. In particular, the orchestral interludes that close the second act and open the third are deeply affecting, while holding in check any excesses and retaining the contemporary musical vocabulary of the time. Several of the arias are haunting, too.

In the end, Lenny wins. A Quiet Place proves that authentic voice of Bernstein could not be held back, and it is what made the experience of hearing it special.