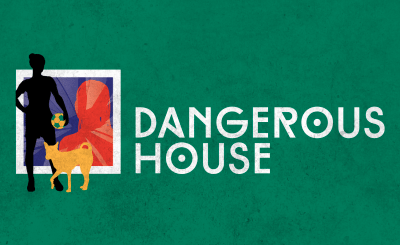 South Africa is the ONLY African country where gay marriage is legal.  At the same time, the common South African practice of “corrective rape,”—purportedly intended to turn lesbians straight—goes unprosecuted.

This is the background of the taut and powerful drama, Dangerous House by Jen Silverman, the fourth and final Nikos Stage production of the Williamstown Theatre Festival‘s 2018 season.  Silverman has spent several summers at the Festival, where her play The Roommate was performed in 2017 after a 2016 reading there.  In 2010, while living in Japan, she watched the televised broadcast of the World Cup in South Africa, accompanied by her expat South African friends.  Questioning what it meant to her friends to leave their country and separate themselves from all they’ve known, having to create a new existence while resisting the magnet-like pull of home, Silverman found her first inspiration for Dangerous House.  The second is based on the work of Cape Town resident Ndumie Funda, who runs “Luleki Sizwe”— a safe house for queer women who have been raped or are victims of violence.

Director Saheem Ali, a gay man who left his home in Kenya where homosexuality is taboo, to become a United States citizen, suffers the guilt of abandoning the human rights struggle within his country.  Because of his strong identification with this play, Ali has been working with Silverman for the past two years “reimagining and restructuring it.”  Despite Silverman’s anxiety about telling a story that takes place in a country and culture to which she doesn’t belong, Ali assured her that her work was respectful and authentic.

Dangerous House focuses on the relationship between Pretty Mbane (Samira Wiley) and her ex-lover Noxolo (Alfie Fuller), a female football star who chooses to leave South Africa in order to take advantage of a student scholarship in London, where her sexual orientation is accepted and she is safe.  When Noxolo is suddenly unable to contact Mbane, who seems to have disappeared, she decides to risk going back to Cape Town to find her.  Refusing to be dissuaded by her gay friend Marcel (Phillip James Brannon), she returns home during the excitement of the World Cup hosted there.  Through her brother Sicelo (Atandwa Kani), she meets Gregory (Michael Braun), an American journalist in Cape Town, who promises to help find Mbane, and to write her story.

This five-person ensemble is first-rate. Wiley, recently nominated for an Emmy for her performance in The Handmaid’s Tale, has the most challenging role because she is alone during much of her stage time.  In poetic monologues, delivered directly to the audience, she personifies the heroic Mbane, who stubbornly and recklessly insists on standing up for injustice.  Wiley explores her humanity while at the same time finding the hidden and welcome humor in her situation.

Fuller, whose scenes are highly charged, communicates the emotional cost of the terrible choice Noxolo is forced to make.  Her relationship to Marcel, her closest friend and employer at a London bar, moves from easy camaraderie to deadly serious threats as Brannon, in a touching performance, begs her to stay, reminding her of the horrors they have both faced in South Africa.  His anguish is tangible, as he sees that his exhortations have no effect on her.

Kani, as Noxolo’s brother Sicelo, morphs effortlessly from a lovable charmer, as he serves as tour guide for Gregory (offering him beautiful women), to a frightening homophobe, urging his sister to marry a man and have children.  Braun’s Gregory, having finally stumbled upon a promising story about the underbelly of South African society, is drawn in by Noxolo’s search for Mbane, and is willing to risk everything to land this story. The actor reveals a combination of kindness, fearlessness and ambition, as he tries to navigate these complex waters.

Director Ali has selected a design team to match his intense  directing style.  The most astonishing element of the physical production is Dane Laffrey’s set.  Despite Silverman’s suggestion that “the set must be suggestive and spare,” the stage is dominated up by an enormous dark cube, one edge facing the audience, extending from floor to ceiling. The only visible onstage furniture is a movable bar in the stage left corner, and a table and two chairs in the stage right corner.  In a striking lighting design by Lap Chi Chu, the proscenium is ringed with bright lights above and on the sides that are illuminated between scenes.  During these breaks Sound designer Palmer Hefferan offers Rap music, the cheers and celebrations of World Cup aficionados, and loud, ominous rumblings.  When the cube is finally pried open, it reveals Pretty Mbane’s brightly-colored lodging occupying center stage, which is odd because so few of the scenes take place there.   But the centrality of her room’s position reflects the life-and-death struggle faced by South Africa’s LBGT community.

Dangerous House grips the audience from start to finish. Soon Williams College students will return to the campus and the lights of the Williamstown Theatre Festival will be dark until next summer.  Catch this production before it’s too late.