REVIEW: “She Loves Me” at The Theater Barn 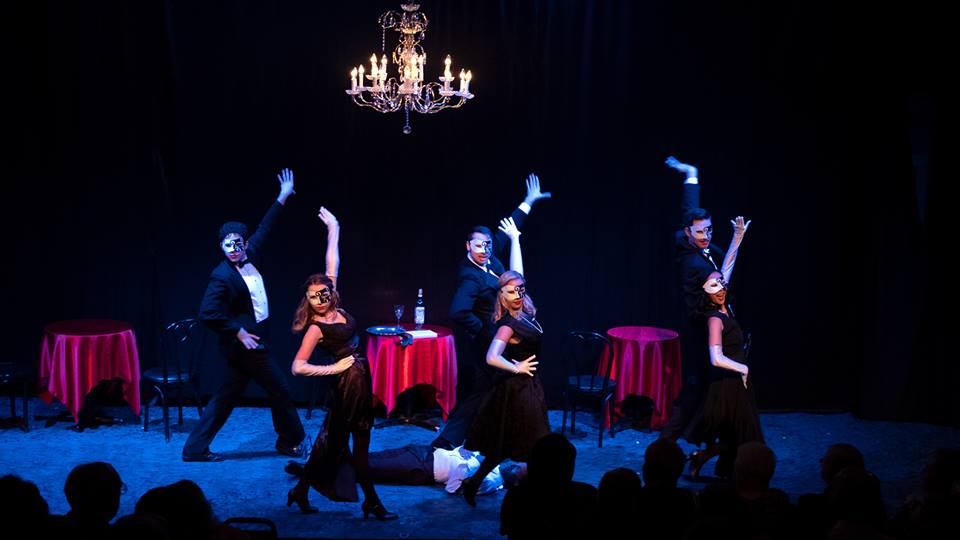 REVIEW: “She Loves Me” at The Theater Barn

She Loves Me is the very definition of the word “charming.” It premiered on Broadway in 1963, in the heyday of Big Book Musicals, and while it sort of fits in that category with a large cast, multiple sets, and a two and a half hour run time, it lacks the big dance numbers and scores of high kicking chorines that audiences of that era craved, so despite a stellar cast that first big production was a comparative flop.

Flash forward half a century and She Loves Me is right in vogue. It is an ensemble piece, rather than a star vehicle, with lots of delightful roles for a range of performers, and the music is character-driven and quirky. It is an endearing tale told well about a group of perfectly ordinary people who you come to find fascinating.

The year is 1937, but there is no mention of the political turmoil in Europe at that time, and the show covers about six months, from midsummer to Christmas of that year. Mr. Maraczek (John Trainor) is the owner of a chic Parfumerie that bears his name.  There he sells ladies’ perfumes, cosmetics and beauty products with the aid of his clerks: Georg Nowack (Patrick Scholl), Ladislav Sipos (Allen E. Phelps), Ilona Ritter (Alexa Renee), and Steven Kodaly (Travis C. Brown), and his eager young delivery boy Arpad Laszlo (Ali Louis Bourzgui).  On a lovely June day in 1934, it has been decided not to replace a recently departed clerk because business has been a bit slow.  But then Amalia Balash (Alexandra Foley) shows up and, by making a miraculously quick and clever sale of a musical cigarette box, is hired nonetheless.

There is no love lost between Amalia and Georg (which is pronounced the English/American way, not the European “GAY-org” despite its lack of a final “e.”)  They just seem to rub each other the wrong way, and both are preoccupied with their relationships with their pen-pals, who they have never met except by letter. Amalia is feeling that it is high time to settle down and hopes she has found her match in her “Dear Friend” of the letters

Ilona has been having a highly unsatisfactory affair with Kodaly (pronounced Koh-DYE) who is a handsome, slick, and smary womanizer.  (You will not be surprised to learn that the supremely handsome, slick, and smary Jack Cassidy originated the role on Broadway and took home a Tony for his efforts.) During the course of the show Ilona realizes that she needs to take another approach entirely to find the man of her dreams.

While Georg and Amalia are the romantic couple at the center of the plot, each character is brought fully to life in Joe Masteroff’s libretto, Sheldon Harnick’s lyrics, and Jerry Bock’s music.  You come to like and care for each of them, except the slimy Kodaly who really doesn’t care what you think anyway.  None of them are perfect or special, they are just plain, average, hard-working folks.  In other words, they are very real people to whom it is easy to relate.

For this most charming of musicals, director and choreographer Kelly Shook has assembled the most delightful and talented of casts. All of them very young save for Phelps and Trainor, which adds sparkle to the show but changes the original story in which everyone save Arpad is over 30. Georg, Amalia, Ilona, and Steven Kodaly should be hearing the clock ticking therefore anxious to find love and professional advancement before it is too late. But the Theater Barn is a magnet for talented young performers on their way up, and many members of this cast will also play middle-school students The 25th Annual Putnam County Spelling bee in two weeks, so a young cast was inevitable.

As soon as I heard Foley sing in Pump Boys and Dinettes I knew she would be Amalia. She has a marvelous trained operatic voice and the youth and energy to make Amalia endlessly appealing. I said in my Pump Boys… review that she twinkled. Here she gets to shine with full star wattage. Scholl is much too boyish for Georg, but he sings flawlessly (even while turning a cartwheel) and matches Foley’s energy on stage.

The petite Renee is a little firecracker of sexuality as the worldly Ilona. While Amalia is a lovelorn “good girl,” Ilona wonders why her open appetites haven’t won her the affection she craves. Her happy ending is greeted with enthusiasm by the audience.

Brown plays Kodaly as a truly creepy slimeball, taking the character’s unctuousness to a new level and while tossing in a 21st century dash of sexual fluidity. He possesses a fine counter tenor, into which he slips with ease at surprising moments.

A Berkshire native, Bourzgui brings both youthful buoyancy and professional panache to young Arpad*. This young actor has been all over area stages this summer a trend a hope he continues in years to come even if his career takes him off to bigger things.

As noted, She Loves Me is not a big dance show because it is a simple tale about simple people who, while they are more apt to burst into song at work than you or I, do not break into dance nearly so often. But there is one big number – A Romantic Atmosphere – and it is also delightfully comic. Shook and the company do a marvelous job with it, led by Levi Squier as the flamboyant head waiter at the Café Imperiale and Xavier McKnight as his butter-fingered busboy.

My big concern going in was that She Loves Me was physically too large a show for the Theater Barn. It requires three or four major sets and fairly rapid changes. Set designer Anthony Martin has solved this problem by essentially building only one set – the interior of Maraczek’s Parfumerie, which opens up from the back of the stage when needed. Otherwise the stage is quite empty save for a few bits of furniture to suggest the other settings, and to leave space for this large cast to maneuver.

It is hard to believe that Bock and Harnick’s next show was Fiddler on the Roof which is such a ponderous (it runs over three hours with a strong headwind) book musical.  She Loves Me verges on being operetta, and its songs, while delightfully catchy and tuneful, don’t take the intro-verse-chorus-verse-chorus-bridge-chorus-coda format of a standard Broadway Ballad.  Harnick’s lyrics are character specific and almost stream-of-consciousness, often eschewing regular rhyme-schemes in order to surprise the audience into really hearing what the character has to say. Thankfully the aggressive over-miking that plagued Pump Boys and Dinettes has been abandoned and Musical Director Ollie Townsend leads a three-piece band in appropriately gentle musical accompaniment from behind the scenes.

You are guaranteed to love this production of She Loves Me, so catch it quick, before it vanishes.  This really is a show for the whole family that will make you laugh and cry and shout “Bravo!”

Performances for SHE LOVES ME are Thursdays and Fridays at 8pm, Saturdays at 4pm, and 8pm and Sundays at 2pm at the Theater Barn. Tickets are $29.00 for the evening performances and $27.00 for the Sunday matinees. Tickets available from the box office (518) 794- 8989 or online www.thetheaterbarn.org

*She Loves Me is based on the stage comedy Illatszertar or Parfumerie by Miklós László, who fled his native Hungary for the U.S. in 1938. He was still alive when this musical debuted on Broadway in 1963, and it is a nice touch that the writers gave Arpad his last name, and christened their newly imagined soubrette, a character that does not appear in László’s original, Ilona, which was László’s mother’s name.)