REVIEW: “Annie” at the Mac-Haydn Theatre 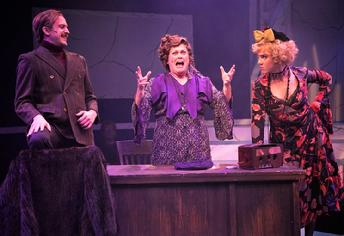 REVIEW: “Annie” at the Mac-Haydn Theatre

Surely there is no better cure for melancholy that approaches as the curtain descends on the summer theater season than a healthy dose of rambunctious orphans, a rags to riches story, a guaranteed happy ending…AND a dog.  The Mac-Haydn Theatre fills the prescription to a “T”…or in this case, an “A,”  with Annie closing out its 50th anniversary season .

Producing Artistic Director John Saunders has directed another gem of a production, perfectly set in the round confines of the Mac. He flawlessly guides orphans, billionaires, scoundrels, Cabinet members and even a U.S. President with a deft hand, creating a joyous, energized, and of course ultimately happy-ever-after tribute to optimism and  the pursuit of prosperity.

Overall the show fully demonstrates the quality of his directing talents, but Saunders especially deftly maneuvers the ensemble cast to create composed and posed vignettes of 1930s New York in the midst of the Great Depression. From the opening montage of the streets of New York, to “Hooverville” to the triumphant paean to “NYC”, the images are crisp and clean, and impactful.  Costuming by Jimm Halliday adds just the right texture and character to the production.

Saunders’ direction ensures that there’s not a bad seat in the round house; the cast gives “equal time” to each of the four sections of the audience, filled almost to capacity on opening night. Unlike some previous productions, this season, there is no neck-craning or extended backside views to be endured.

The title role is double-cast shared by Annabel Feigen and Rieliegh Smith. At the performance reviewed, Annie was played delightfully and delightedly by Feigen, who performs with the aplomb of a seasoned veteran.  With pitch perfect delivery, and a beautiful vibrato in her voice, she infused every moment with the cheerful, almost cloying optimism emblematic of her character.

The ONLY moment she could possibly be considered to have been upstaged is by the entrance of the stray dog “Sandy” who bounds on stage, on cue, eliciting a round of applause that swells to a crescendo when “he” – the program credits Matilda Nightingale in the role – responds perfectly to the “Here, Sandy!” command, and gleefully lopes off-stage. No doubt the performance was inspired by the pre-show belly rubs and pep talk the canine cutie was seen receiving prior to curtain.

Feigen more than held her own with Daddy Warbucks, played with flair and verve  by George Dvorsky, who counts numerous Broadway and national roles and performances among his credits. Feigen is clearly unfazed by Dvorsky’s impressive experience; there is a charming and  sincere rapport between the two, which is never more on display than in “I Don’t Need Anything But You”, as they celebrate Annie’s  being an orphan no more.

From the perspective of a stage manager who has wrangled juvenile hordes of urchins, orphans and pickpockets on and off stage, special attention must be paid to the youngest members of the cast.  Annie’s band of buddy orphans are surely 12 of the cutest, most polished, and HAPPIEST performers to tread the boards of the Mac  this season.   They march, pirouette, stomp, and storm across the stage in perfect unison and (mostly) perfect pitch.  Each one was “Never Fully Dressed Without a Smile” from the show’s opening through curtain call. The joie de vivre  they display makes the audience want to jump up on stage and join in their gleeful harassment of that harridan of the NYC Municipal Orphanage, Miss Hannigan.

And should any of the orphan corps wish to abandon their acting careers, each could easily turn their hands to serving as stage crew. Their collective entrance in Act I was a precisely orchestrated and executed scene-setting of the orphanage, complete with mattresses borne in, laid out, and accompanied by a pillow parade accomplished in perfect time to the music.

Speaking of the dreaded Miss Hannigan, Mac-Haydn favorite Monica Wemitt is in her element as the classic villainess of the piece. The manaical, almost demonic glint in her eye, and voice, as she decries the “joys” of the “Little Girls” in her charge , ALMOST makes you wonder just what might be in that little silver flask so conveniently tucked within her reach.   Wemitt is a stalwart staple at the Mac, and her performances never fail to inspire some of the loudest applause offered at show’s end.

The hands, feet, and body of Sebastiani Romagnolo bring a sinuous, sinewy, slimy, smarmy lack of charm to the rascally rogue Rooster Hannigan.  His hip-swiveling, writhing undulations in the gloriously  choreographed “Easy Street”  are matched step for step by Wemitt and Sarah Kawalek as Lily St. Regis.

Two additional performances worthy of note are Corinne Tork as Grace Farrell, the trusty sidekick/secretary to Oliver Warbucks. Her affection for Annie shines through in every word and note, beginning as she beams approvingly as Annie declares “I Think I’m Gonna Like It Here,” and carrying through to sharing the exuberance of Warbucks and Annie as they explore the streets of “NYC”.

Gabe Belyeu as the wheelchair-bound President Franklin Delano Roosevelt adds a nice “character bit” to his extensive list of performances at Mac-Haydn. His demands that his dubious, gloomy Cabinet members (including the first female Cabinet member Frances Perkins, this proud Mount Holyoke fellow alumna must observe) join Annie in a rousing chorus of “Tomorrow” are spot-on for how one imagines FDR would have reacted in the darkest days of the depression, and as my companion noted when a miraculously-recovered FDR leaped on stage to take his curtain call, “at least health care must have been better back then.”

Annie at the Mac is the perfect season-ender, with enough sunshine and smiles to keep us all humming and hoping through the cold winter that is sure to come. Don’t wait until “Tomorrow” to get tickets; take the “Easy Street” to Chatham and enjoy this perky, almost perfect production closing out a stellar 50th anniversary season at the Mac.

For tickets and details please visit www.machaydntheatre.org or call the box office at (518) 392-9292.