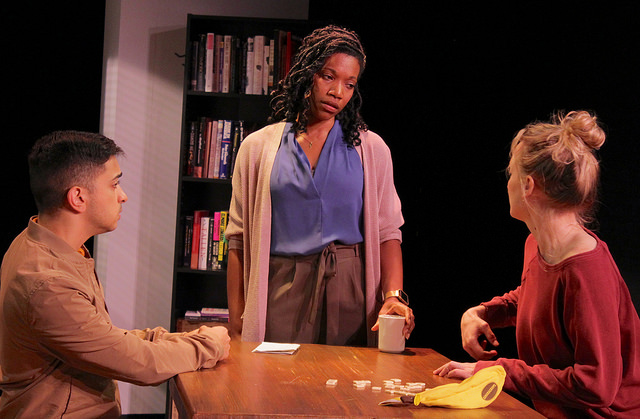 The title explains it all.  Rachel Lynett has written a powerful and controversial attack against white liberals who think they understand Black people but whose marches and protests against racism accomplish nothing beyond making themselves feel better.  For a white reviewer like myself to evaluate this work may subject me to the very criticisms that are directed against the play’s white characters; but nevertheless, we must plunge in.

Well Intentioned White People, now enjoying a World Premiere at Barrington Stage Company, features Cass (Myxolydia Tyler), a young, queer, Black college professor whose work focuses on the African diaspora.  After receiving racist letters warning her to “Go back to Africa,” and having her car defaced and damaged, Cass, who prefers to keep all this under wraps, turns her fury against her white roommate and ex-girlfriend Viv (Victoria Frings), for reporting the car incidents (she doesn’t know about the letters) to the school paper (run by Viv’s sister).  Responding to the subsequent publicity, the Dean (Andrea Cirie) of this unidentified nearly all-white liberal institution located in a red state, decides to launch a campus-wide “we will not allow discrimination event”:   an “Equality Day” that turns into “Unity Week,” protesting against racism, homophobia, and the refugee crisis.  And she bulldozes Cass into serving as the face of the protest.  Mortified, Cass complains that “something horrible happens and then we expect the person it happened to to lead the revolution.”  But because she is coming up for tenure, her friend Parker (Samy el-Noury), a transgender, Puerto Rican male colleague, successfully urges her to accept the role of keynote speaker, smile, and go along with the events.

Skillfully directed by Tiffany Nichole Greene in her debut at Barrington Stage Company, this ninety-minute play in thirteen scenes veers from comedic punch lines “protesting is the new ‘brunch’ for white people” to deadly serious incidents, as Cass confides to Parker:  tell me “that when you get pulled over [by the police] your heart doesn’t drop,” that “you know for sure with no doubt that you’ll be able to drive away after the encounter.  That you’ll be alive.”  In her introduction to the play, Lynett describes the interaction between the characters as a chess game during which they engage in a battle of wits:  the script specifies when they interrupt each other, when they take a moment to reassess their next move, and when they shift into action.

In contrast with the more realistic characters, the Dean stands out as a caricature.  As soon as she reads about the racist attacks, she jumps into action, without the approval of the university president, without asking Cass, and without any thought to the consequences.  Among her proposals, the most ludicrous is that “every time something racist happens, every Black person gets $20 added in their bank account.” The playwright mocks her from the moment she steps onto the stage and because Andrea Cirie plays her to the hilt (what choice does she have?), this characterization threatens to derail the deeper message of the play.

Though the other white characters can often verge on parody, they are presented with more nuance.   Viv, who clearly still loves and is loved by Cass, is a fast-talking activist who also develops a plan of action as she tries to protect her friend. The difference between her and the Dean is that Viv is truly worried about Cass whereas the Dean exploits her. Victoria Frings is wonderful in this role, as she moves from hysteria, to helplessness, to finally putting her own needs aside and listening to her friend.

Then there’s Mara (Cathryn Wake), an insufferable student who espouses every cause, pursues every scandal, and files complaints against everyone.  Although Mara is certainly hard to take, Wake plays her with such sincerity and intensity that we can almost sympathize with her, especially when she attempts to modify her behavior and open herself to new approaches.

The two characters of color—Cass and Parker—find in each other a kindred spirit.  Parker, sensitively played by el-Noury, absolutely understands what Cass is going through, having been subject to discrimination himself, though he seems more concerned for her safety than she does.  Cass remains strangely aloof, unwilling to talk about the threats to herself or her car, a stubbornness belabored by the playwright as the frustration of  her close friends and the audience mount.  But she finally  breaks through this stalemate, admitting that the racism she has suffered all her life has become so expected that there is no such thing as unacceptable behavior.   Sound familiar? Tyler’s portrayal masterfully runs the gamut from annoyance to fear to an impassioned indictment of well intentioned white people.

Scenic designer Adam Rigg adroitly arranges for all of the play’s locations to remain on the St. Germain Stage at once:  Cass and Viv’s well-appointed living room, an area that represents both their kitchen table and Cass’s office, and a desk and white board suggesting a classroom.   Lux Haac designs a multitude of costumes for each character, thoroughly in keeping with their roles; Scott Pinkney’s colorful, rectangular lighting fixtures above, below and on one side greatly enhance the scene divisions as does Joel Abbott’s percussive, finger-snapping music.

Well Intentioned White People leaves the mostly white audience in a quandary, wondering what, if anything, we can do to curb racism in our country and in ourselves.  But perhaps just asking the question will spur future playwrights and audiences to reconsider their choices.