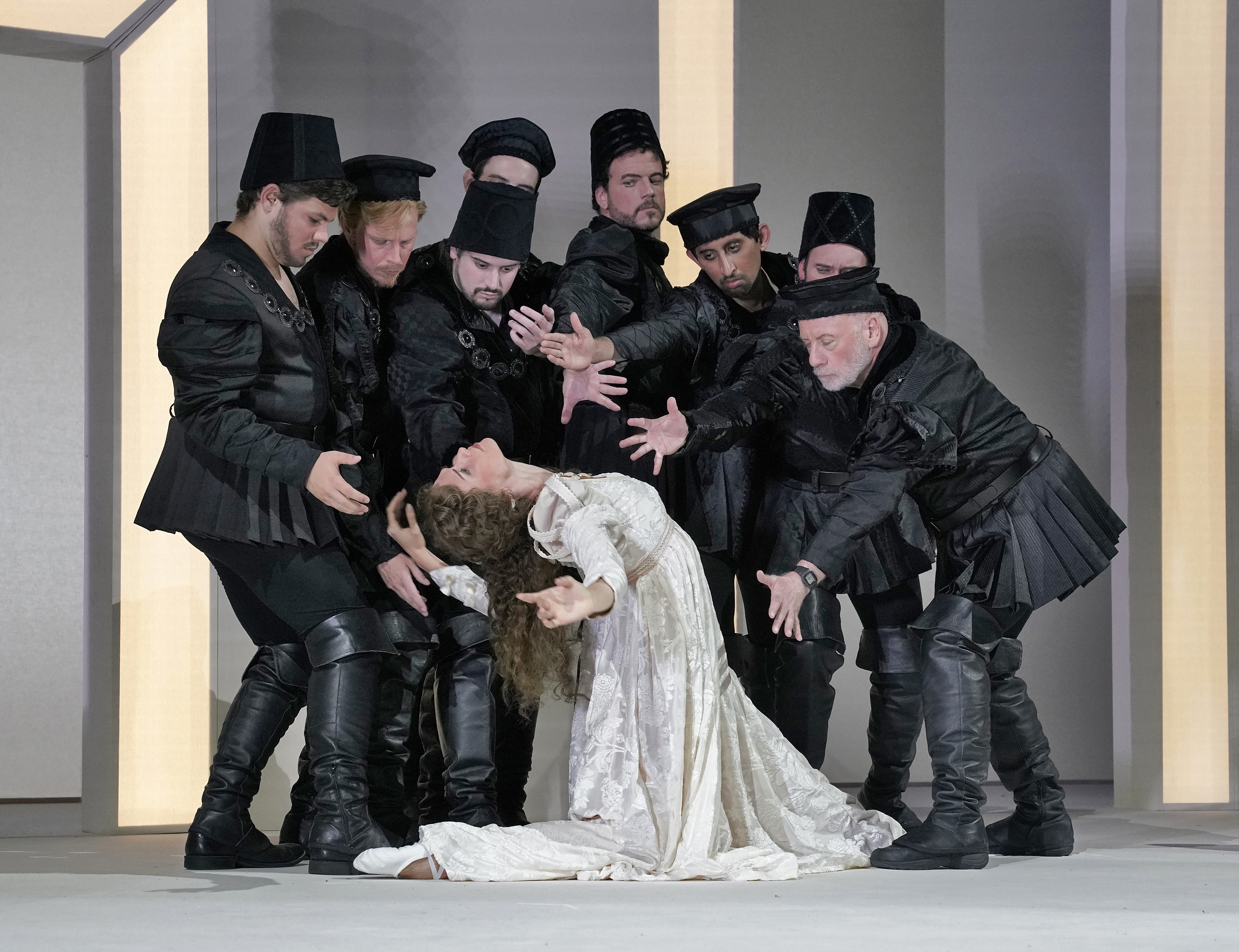 For nearly three hours last Saturday afternoon, you could hear a pin drop inside the Colonial Theatre in Pittsfield at the Berkshire Opera Festival’s presentation of Verdi’s classic tragedy, Rigoletto. That, and the sounds of splendid music, which the audience drank in with rapt attention.

So good was this performance that a five-minute standing ovation would have gone on for ten had not the cast waved farewell and beat a final retreat. It is not every day you get to hear a group of world-class singers in the Berkshires, or anywhere else for that matter.

Let’s start with our title character, played by the Romanian-born baritone Sebastian Catana. Rigoletto is the court jester, or fool, to the Duke of Mantua, whose bitterness at his deformity (generally depicted as a hunchback) and obsessive protectiveness of his daughter, Gilda, set the terrible events in motion.

With credits at the Met and elsewhere, Catana proved a definitive Rigoletto. His voice has untapped power combined with touching lyricism.

As Gilda, the sheltered daughter who longs to experience the world – and love – American soprano Maria Valdes was revelatory. Though occasionally slight at the lower end of its range, her voice soared with control and grace through both lyrical and coloratura passages, and her top notes gleamed. Here’s hoping this talented young singer goes far!

Chilean-born American tenor Jonathan Tetelman made an appealing duke. His is not a big voice, but it has a gorgeous tone and impressive, true tenor’s range, at the top of which his “high Cs” were flawless.

And on it went to the smallest roles, all sung beautifully, and directed masterfully by conductor Brian Garman, who led an equally accomplished orchestra. Two singers deserving of special praise were American bass-baritone Joseph Barron, whose crackling voice brought the murderer-for-hire Sparafucile to life, and Israeli mezzo-soprano Maya Lahyani as his mischievous sister Maddalena.

Only the staging and lighting could be faulted in this production, which hewed to the traditional Italian Renaissance setting of the story. (Charles Caine’s Cinquecento costumes, in grays and navies, were lovely.) The minimalist set was a real puzzlement and did not serve the action well. Scenes were alternately underlit or overlit in cold blue light, and randomly, in a key duet between Rigoletto and Gilda, John Froelich bathed the scene in red-orange hues. It was a shock to learn that Froelich is the Met’s resident lighting designer.

Transitions between scenes were also dealt with strangely, with players walking on an off with props at a dirge-like pace accompanied by silence. Then there was Gilda’s death, staged in a balletic or dream-like manner that muddled the actual events (in which Sparafucile is supposed to stab her) taking place.

As iconic as Rigoletto is as operatic tragedy, with its themes of destiny, jealousy, vengeance, and alienation, one must confront the unsettling plot that underlies it. Especially in this #metoo moment, an audience cannot help cringing at Rigoletto’s depictions of rape and its disempowerment of women — even allowing for the time of its writing (1851).

In the story, based on a play by Victor Hugo (author of The Hunchback of Notre-Dame), the Count Monterone (John Cheek) places a curse on Rigoletto after the Duke has defiled Monterone’s daughter and the jester has mocked him. This curse (“La maledizione”) is the engine of fate that consumes Rigoletto.

As things transpire, the Duke attempts to seduce Gilda, whom he has seen at church. Subsequently, the Duke’s courtiers kidnap Gilda (as payback for their own dislike of her father) back to the palace, where she and the duke consummate their love. Undone by this betrayal, Rigoletto hires Sparafucile to murder the duke, wherein after an unfortunate series of events – Spoiler Alert! – he kills Gilda instead.

What, then, do we make of the duke’s most famous aria, “La donna e mobile,” or “Women are fickle,” sung not long after his dalliance with Gilda, when he has already moved on to his next conquest (Maddalena)? Today we would call the duke and the whole class of courtiers sexual predators, and one way to read the aria and the opera is that Verdi is damning them with malicious irony. Point for Verdi.

But we also have Gilda’s extreme naiveté and her father’s overbearing desire to hide her from the world to safeguard her “purity.” If that is not enough, Gilda goes willingly to her own execution, whether out of a desire to save her own “fickle” lover or to atone for her fall from grace, or both.

I am reminded of a performance of Puccini’s Tosca I attended last year. The audience’s discomfort at a number of scenes (with similar implications) was palpable. Of course, we are more than fortunate to be able to revel in the therapeutic joy of music, so superbly presented as it was in Pittsfield. Someday soon, however, we may have to find different ways of grappling with the troubled sexual politics of 19th-century culture.