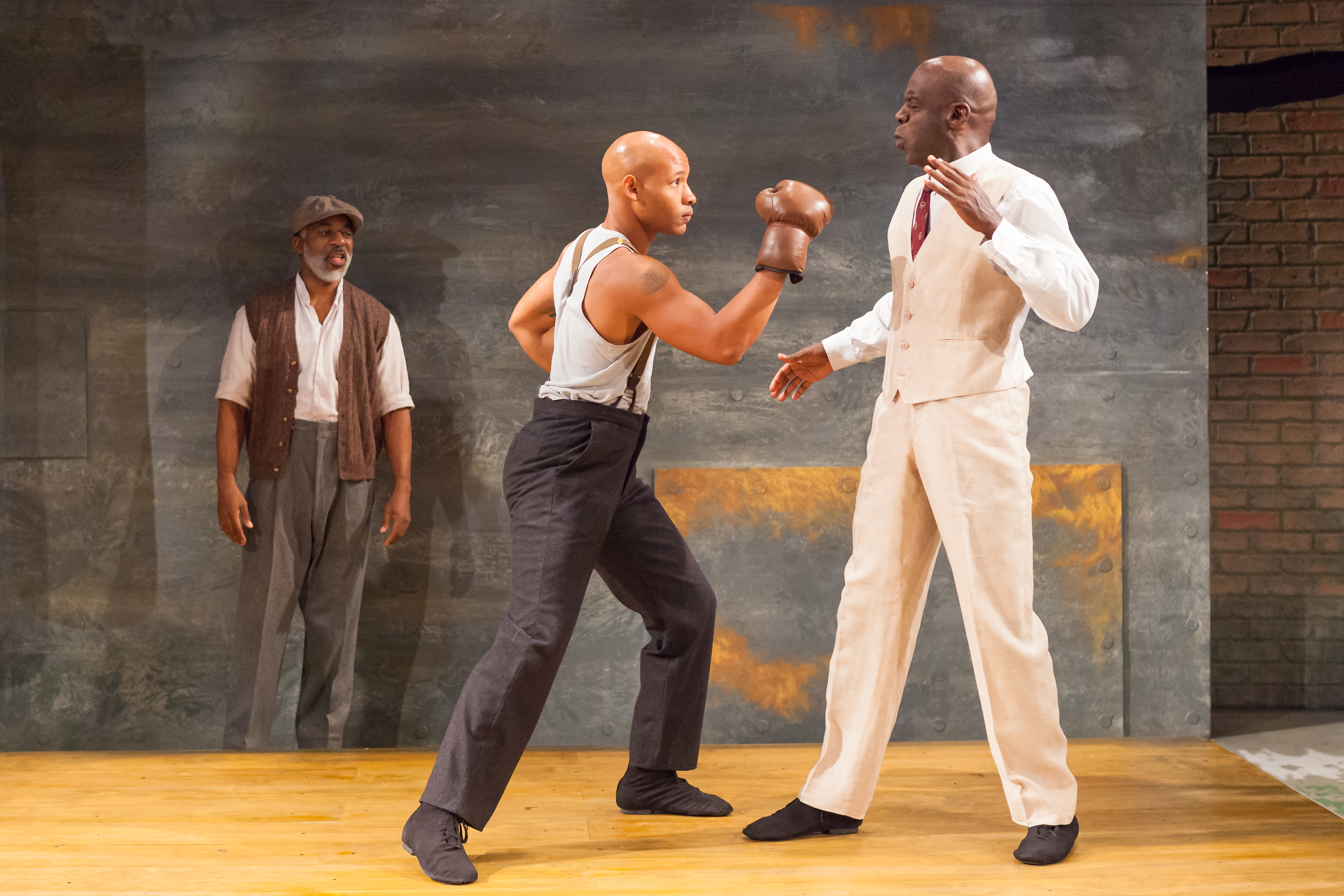 How do you depict a prize fight onstage without the boxers landing a single blow?  In The Royale, playwright Marco Ramirez takes on this challenge, reaching for every theatrical tool in his arsenal to bring to life this electrifying production inspired by the struggles of iconic black heavyweight Jack Johnson.  In Capital Repertory Theatre’s current offering, Ramirez, abetted by director Megan Sandberg-Zakian, fight choreographer Kyle Vincent Terry, and an exceptional cast, combines poetic dialogue, music, singing, rhythmic movements, sounds, evocative lighting, authentic period costumes and choreographed fight scenes in which the performers face forward and do not touch one another.  With only a five-character ensemble, Ramirez brings both the world of boxing and the horrendous stain of American racism in the first decade of the twentieth century to a heart-stopping crescendo.

Jack Johnson, who was the first African-American World Heavyweight Boxing Champion, stirred up so much controversy that he was jailed in 1913 on a racially motivated charge.  Helped by Ken Burns’ 2004 television documentary:  Unforgivable Blackness:  The Rise and Fall of Jack Johnson and by others including Sylvester Stallone, who brought this case to the attention of Donald Trump, the President issued a posthumous pardon to Johnson earlier this year.

Ramirez does not pretend to adhere to all the facts of Johnson’s life, changing the names of the characters and selecting details that suit his aim. Chronicling Johnson’s goal to win the world heavyweight title, which had always been held by a white boxer, alter ego Jay Jackson (Thomas Silcott), proclaims at a press conference:  It “ain’t about bein’ no Heavyweight Champion of the White World, It’s about bein’ Champion, period.”  White champions had long refused to defend their crowns against black fighters—until Johnson broke the barrier in 1910.  Ramirez explores white America’s violent reaction to a black man rising to the pinnacle of boxing success, and the toll it would take on ordinary African-Americans.

The Royale, first staged in 2013 in Los Angeles, and subsequently produced at Lincoln Center in 2016 under the direction of Rachel Chavkin, who won an Obie award and was nominated for a Drama Desk award for her efforts, was most recently seen at the Merrimack Repertory Theatre in Lowell, Massachusetts.  Sandberg-Zakian, Merrimack’s Director-in-Residence, along with many of the actors and designers have reprised their roles for Capital Rep.

The play—and not just the fight scenes– is choreographed from beginning to end.  It is stylized, rather than realistic, with foot stomping and clapping, sounds and movement written directly into a script that has its own lyrical rhythm.  Except for music between the scenes (thanks to sound designer/composer Arshan Gailus), and a working bell, every sound originates organically from the performers, who are sometimes called upon to play multiple roles.

In an interview in Stages magazine, Silcott describes the demands on the actor who plays Jay Jackson:  “this play requires it ALL:  Voice, muscles, emotions, all working together.” Continually moving throughout the production, Silcott, as Jackson, speaks his thoughts in an inner monologue during every fight, punching the air, stomping to indicate landing a hit, and crunching his body when receiving one.  During a press conference, he actually spars with a young fighter, Fish (Jonathan Louis Dent), as he answers insulting questions, while obeying the physical instructions of his trainer (Jeorge Bennett Watson).  Silcott, a licensed massage therapist, singer and drummer, summons all of his considerable skills to create this complex character.

Mark W. Soucy, playing Max, who shifts from sports announcer to fight promoter, manager to referee, perfectly captures the vocal qualities and tone of each of these characters.  He is absolutely convincing as he announces the fights (“This is one for the ages, boys, David and Goliath got nothing on us”) and as Jackson’s manager he persuades his skeptical fighter that he is doing everything he can to further the boxer’s career.  The only white character in the play, Max cannot keep his racism from rearing its ugly head at key moments.  During the press conferences Soucy impersonates each questioner (eliminating the need for more actors) and does it all while clapping the required number of times along with the rest of the cast, to punctuate the lines.

Jeorge Bennett Watson, as Jackson’s trainer Wynton, keeps up a constant patter to protect the boxer from wounding words  “head up,” “steer clear Jay,” “take control boy,” and to guide him through the fights.  The play moves with lightning speed and one of the challenges for Watson is to get those lines in while words and movement swirl around him.  But he can be just as powerful delivering a quietly devastating monologue describing the treatment of black boys in a boxing ring at a club called The Royale.

Ramona L. Alexander plays Nina, the sister of Jackson, dressed in a stunning red outfit (kudos to costume designer Miranda Giurleo).  The voice that warns Jackson, on the night of the big fight, to the grave dangers involved in daring to compete for the championship against a white man—not only to himself but to their family and the country–belongs to Nina.  “I think you up and forgot about the rest of us,” she declares, “The ones ain’t as strong as you.”  And shockingly, when the title fight takes place, she stands in the place of the white champion, who has come out of retirement to lock horns with Jackson.  Sister and brother face off throughout the bout, as they engage in this balletic championship fight (terrific work by Terry and the actors), their bodies reacting to each other’s imagined blows.  It is an astonishing sequence that takes place while the announcer, the trainer and Fish continue their own commentary.

The growing attachment to Jackson of the young black prodigy Fish is palpable.  Someday he hopes to carry on the progress made by his idol.  It seems that Dent is new to this play but he is a welcome addition to an ensemble cast that fits together like the parts of a well-oiled machine.

Following the demands of the playwright, designer Lawrence E. Moten III keeps the set simple, with a raised wooden platform backed by a dark wall, a heavy punching bag and some stools.  Adam Honore’s dramatic lighting adds immeasurably to the atmosphere, while director Sandberg-Zakian is the ringmaster who keeps this production under tight control every second of the way, leaving the audience breathless as it reaches its impressive conclusion.

THE ROYALE runs from September 21 through October 14 at 8pm Friday and Saturday, 7:30pm Tuesday, Wednesday and Thursday, and matinees at 3pm Saturday and 2pm Sunday.  For tickets and information call Tickets By Proctors (518-445-7469) or visit capitalrep.org.