REVIEW: “Men On Boats” presented by The Acting Class with Patrick White at the Sand Lake Center for the Arts 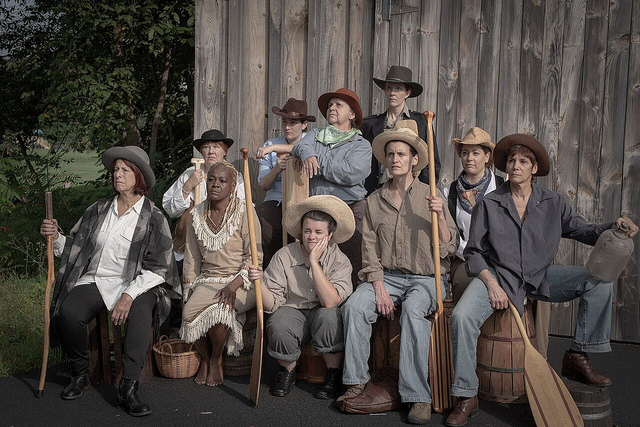 REVIEW: “Men On Boats” presented by The Acting Class with Patrick White at the Sand Lake Center for the Arts

There are no men on stage in the Acting Class with Patrick White’s presentation of Jaclyn Backhaus’ Men On Boats at the Sand Lake Center for the Arts. Nor were there any in the original Clubbed Thumb production at Playwrights Horizons in 2016. The cast of twelve are all cisgender women and all but one, white. But the members of the Powell Geographic Expedition of 1869 being dramatized were, of course, all cisgender men. I say “of course” because the idea of the government sending a late 19th century white woman out to explore the western wilderness was preposterous, even though thousands of pioneer women from a variety of racial and ethnic backgrounds were out there homesteading, giving birth, and raising families under equally stark conditions at that very time.

This is the story told in the play:

Major John Wesley Powell,  a professor of geology at the Illinois State Normal School and a curator of the Illinois Museum of Natural History, embarked with nine men from Green River Station in the Wyoming Territory and traveled downstream on the Green and Colorado rivers through parts of the present-day states of Colorado, Utah, and Arizona before reaching the confluence of the Colorado and Virgin rivers in present-day Nevada. They were the first white men to ride through the Grand Canyon in its entirety.

Powell kept journals and published an account of this adventure as The Exploration of the Colorado River and Its Canyons in 1895. All of the expedition members had considerable wilderness know-how, and seven were veterans of the Civil War, all of whom had fought for the North. None of them, however, had any significant whitewater experience on the rivers of the West.

The crew in 1869, (with the names of the performers portraying them in parentheses):

They set off in three freight boats – the Maid of the Cañon, the Kitty Clyde’s Sister, and the No Name – all 21 feet long and four feet wide with a decked-over bulkhead at each end for storage space. A smaller boat, the Emma Dean, was Powell’s personal vessel. He had lost an arm at the Battle of Shiloh, so the boat was rigged with a strap Powell held on to to keep his balance while standing on deck.

It must be noted that this production, directed by White, is cast completely from members of his Acting Class with Patrick White. In other words none of the actors auditioned, White selected the play to suit their talents, rather than the other way around. Which ever way you do it in a community production there are bound to be some compromises made, but here the match is pretty solid. These actors do suit these roles, and everyone does their very best. Each performer has a moment that will touch you, every performer gets a moment to shine.

This is also a devised theatre piece, which means that the performers and director created their own vision of how to present the show. There is literally no set, but many props, most notably oars, create a sense of place. The cast moves through the whole theatre, even recruiting a few audience members to help unload some provisions. Chad Reid’s sound design and Barry Streifert’s lighting provide solid support creating the illusions of movement and time passing.

I don’t know whether the songs sung and hummed were indicated in the script or devised by the cast, but they are jolly and appropriate. We forget in these days, when music is something we listen to rather than make, that for millennia it was an important social bonding experience for our species. People sang as they worked, they sang for fun, they sang to tell stories. I am sure singing was a big part of the Powell expedition’s real life experience.

There are many scenes on the water – some adventurous and some mundane – and the cast does an excellent job of evoking the motion of the boats using just their bodies. Different characters react in different ways, sometimes putting crew mates in peril with a panicked response to a problem such as a whirlpool, a snag, a waterfall (the waterfall scenes are marvelous!)

Another ongoing concern in the saga is food – finding it, storing it, saving it from falling overboard, cooking it, and, of course, eating it – challenges the cast bring vividly to life. The expedition started out with nearly seven thousand pounds of food and supplies, enough to last ten months, divided equally between the three freight boats. But the No Name, was lost early in the voyage, taking with it a third of their supplies. That loss pushed the crew to the brink of starvation towards the end of the journey.

Before seeing the play I had assumed that the roles were originally intended to be played by men and that White had decided to do a gender swap. In that light the performance raised the question “What is a man?” because so many of the lines felt perfectly natural coming from women. Learning that the play was written by a woman to be performed by women changed my thinking considerably.

In the video below, Backhaus speaks of her decision to let voices tell the story who originally were denied the opportunity:

Knowing that Backhaus had a non-male cast in mind when she wrote the play changes everything. To me, the characters did “sound like women” rather than men. Every time I heard a line that sounded “feminine” I tried to imagine how it would sound spoken by a man. For instance: Do men squeal when surprised by a rattlesnake? Could women not squeal in such a situation? Why is squealing “feminine” in the first place?

I think these things because I know I have to write about the play, but I think Backhaus, and White, want you all to ponder these questions, which are timely and intriguing ones.

Men On Boats is 90 minutes of lively and thought provoking history and theatre. It is a good family show with opportunities to begin conversations about what has changed and what remains the same in the United States. And it is a portrait in courage and teamwork – both from the characters whose story is told, and from the students in White’s class willing to step before an audience and practice their art.