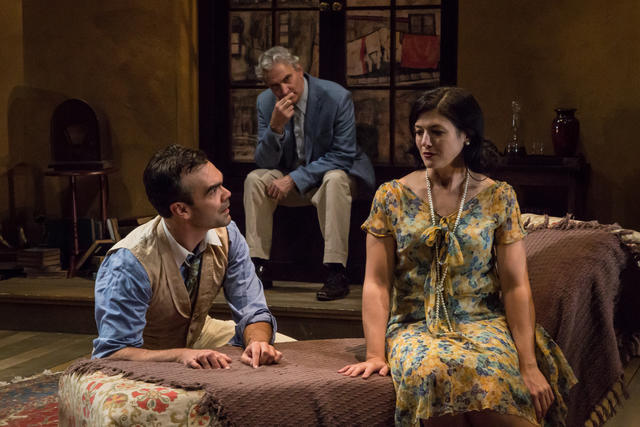 Many twenty-first century theatre audiences, who expect real life behavior onstage, much like reality TV, may not know how to react to the work of Luigi Pirandello, whose play Naked is currently on the boards at Berkshire Theatre Group’s Unicorn Theatre.  Pirandello, writing just after the devastation of World War I with Italy in turmoil and fascism on the rise, searched for different forms of theatre.  Drawing from traditions as varied as melodrama, commedia dell’arte and prefiguring Theatre of the Absurd, Pirandello, ably served by director Eric Hill and an extraordinary cast of uninhibited actors in a new version by Nicholas Wright, compels his audience to look at his play with an open mind.

Melodrama, born in the wake of the French Revolution, is more concerned with emotions than characterization, as poor or middle-class heroines struggling against wealthy or aristocratic villains, are saved by brave heroes aided by comic sidekicks.  The genre alternates between tragedy and comedy, featuring highly dramatic language and situations.  Many of these characteristics can be seen in Naked, which takes place in Rome in the 1920s.  Even before the curtain rises, the heroine, Ersilia Drei (Tara Franklin) has attempted suicide following the twofold misfortune of first being jilted by her lover and then losing her position in the home of a certain Consul (Jeffrey Doornbos) and his wife after the accidental death of their child.  Now the Consul, in addition to three other men, exploit the distraught  Drei, each for his own purposes.  The journalist Alfredo Cantavalle (David Adkins) publishes what he believes to be her story in the newspaper; the novelist Ludovico Nota (Rocco Sisto) offers her shelter in his apartment, and the lover—Franco Laspiga (James Barry) seeks to resume their relationship.  The comic reactions of Nota’s landlady, Signora Onoria (Barbara Sims, giving a terrific performance) are the source of hypocritical humor as she swerves wildly from offering sympathy for Drei to throwing her out, gossiping with her neighborhood friends all the while.

Commedia dell’arte, a form of Italian improvisational comedy popular from the 16th to the 18th centuries, features masked character types who engage in lazzi or farcical physical comedy routines, often sexual in nature, inventing language to go with their convoluted plots.  The constantly changing stories told by the different characters in Naked become so difficult to entangle that there is a scene in which Nota, in a metatheatrical moment, stands in for the audience as he tries unsuccessfully to make sense of it all.  The characters seem to be hiding  behind masks, preventing us from ever separating illusion from reality.  Furthermore, the men who pursue the unfortunate Drei repeatedly attempt to force themselves on her, which leads to the physical pyrotechnics and exaggerated reactions that we see in Commedia.  Kudos to these actors, who plunge into scenes where they end up falling on the floor, crying, screaming, crawling and generally making fools of themselves.

Theatre of the Absurd was born after the horrors of World War II. Based on the existentialist philosophy of French writers like Camus and Sartre, the theatre struggled to find a way to show that human existence has no meaning and that logical communication or behavior could no longer exist.  Although Pirandello had died in 1936 (after winning the Nobel Prize for Literature two years earlier), his depiction of our search for meaning, identity, and truth presaged the work of such playwrights as Beckett, Ionesco, Genet, and Pinter.  The characters in Naked, weaving fantasies and myths about themselves, attempt to find a sense of purpose by what Hill describes as “feeding off of” Ersilia Drei, while she, feeling like a nothing (figuratively naked), seeks a writer to construct a fictional identity for her.

The best feature of the period set (designed by Randall Parsons), representing the cluttered living room of a working novelist, is the window seat and glass doors above it, from which we can hear the noises of the street, wonderfully captured by sound designer/composer J. Hagenbuckle, who probably wrote the Italian-sounding accordion music between scenes.  Yoshi Tanokura has designed beautiful period costumes, each distinctively adapted to the personality of the character who wears them.

The play demands enormous energy from the actors, who prove themselves equal to the task.  Though David Adkins, a thirty-year veteran of BTG, has very little stage time, he adeptly creates a character who only cares about himself and his next headline.  Disappointed about having had to retract his article about Drei, Adkins, sprawled on a chaise lounge (where many of the characters throw themselves periodically), witnesses an argument between Laspiga and Nota, and takes down their words in his notebook while announcing the proposed headlines of the story he’ll write.

Despite his Consul’s elevated position, Jeffrey Doornbos plays the role with the thuggishness and cold-hearted cruelty of a Mafia hit man.  But Drei, though weak from her recent hospitalization, stands up to the Consul, leading to physical and linguistic combat.

James Barry, as Drei’s former lover, gives the most over-the-top performance of the evening.  Each time he makes an appearance, he is more disheveled, out of breath, and hysterical than the time before, pleading and crying for Drei to forgive him and take him back.  Only a brave and physically fit actor could have accomplished this, provoking laughter in the audience as his feelings evolve.

Rocco Sisto, a consummate actor and longtime veteran of Berkshire stages, is perfectly cast as Nota, playing the humble novelist who wraps himself in poetic words, but is bitterly disappointed that Drei has no romantic interest in him, having accepted his offer of shelter only because she wants him to immortalize her in his next novel.

Finally, BTG favorite Tara Franklin gives a masterful portrayal of Drei, the object of everyone’s attention.  From weakness to strength, from anger to tears, Franklin conveys the full gamut of emotional reactions as the brilliant centerpiece of this highly-charged circus of a play.

Bravo to director Hill for resurrecting a relatively unknown work, and for pushing his actors to go for broke, resulting in a compelling production of this strange but intriguing tragicomedy!

NAKED runs from September 27—October 28 at The Unicorn Theatre.  Tickets may be purchased in person at the Colonial Ticket Office at 111 South Street, Pittsfield, online at www.BerkshireTheatreGroup.org, or by calling 413-997-4444.