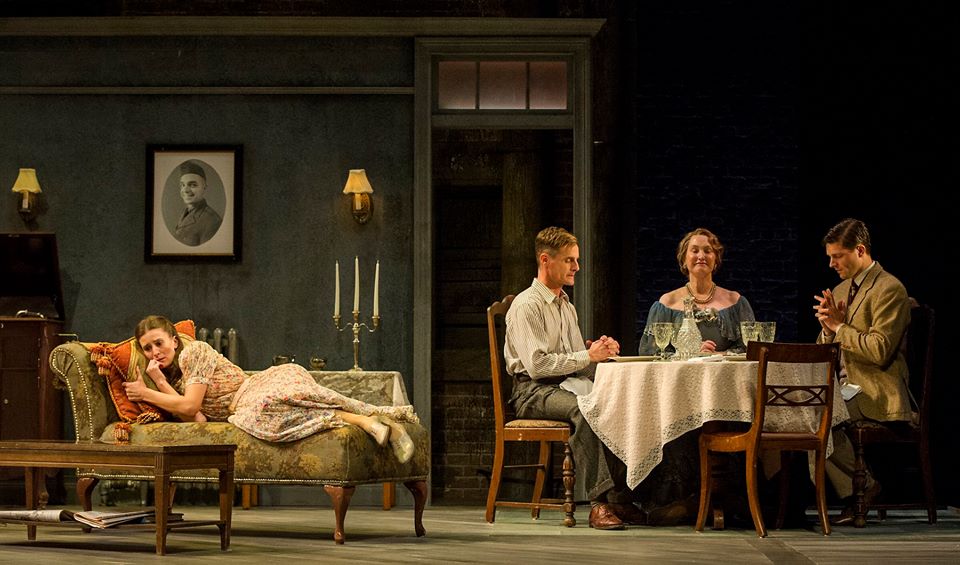 In 1945, Tennessee Williams gave us The Glass Menagerie which earned him a number of awards and propelled him into his ranking as a major American playwright.  His canon of plays  led by A Streetcar Named Desire, Summer and Smoke, The Rose Tattoo, Cat on a Hot Tin Roof, Sweet Bird of Youth and Orpheus Descending secured his place in the pantheon of American theatre artists.   Menagerie has been revived several times on Broadway and has been performed by many major regional theatres across the country.  The current production at Barrington Stage Company in Pittsfield, MA is gripping.

It probably isn‘t necessary to summarize the plot of the play since it has a special place in the American theatre.  Suffice it to say that it is a memory play about the Depression era Wingfield family in St. Louis after the husband/father deserted them sixteen years earlier. The clash between Tom Wingfield (Mark H. Dold) and his mother Amanda (Caitlin O’Connell) and the fears of his profoundly shy sister Laura (Angela Janas) and their resolution, or lack of resolution, is the core of the play.

Director Julianne Boyd has made several intriguing choices starting at the very top of the show.  Dold enters and begins his opening monologue while the house lights are still on.  Perhaps the intention is to create an intimate relationship with the audience and to set him apart from the story he is about to narrate.  The same thing occurs at the beginning of the second act while the audience is still filing in and talking amongst themselves.  Only a loudly projected first line of this monologue sent the audience scampering to their seats.

Dold is omni-present as the narrator.  When he is not directly involved in a scene he remains onstage sitting on the floor leaning against the stage left proscenium, watching his life and relating the story to us.  His performance is controlled and affecting.  We understand his need to break away from his crushingly routine existence which, ultimately, he cannot escape.  He carries the memory of his sister wherever he goes, pleading with her to “Blow out your candles, Laura.”  Dold carries the burden of Tom’s life in his well-rounded, insightful performance.

Amanda is often portrayed as a nag, attacking Tom and scolding Laura while reminiscing about her past as a southern belle in Blue Mountain and her seventeen gentleman callers to stave off the darkness of her current life.  O’Connell creates a more sympathetic Amanda who has a truly heartfelt concern for her children rather than being a harridan.  She exudes an engaging  charm that is not always utilized in other productions.

Angela Janas is a moving Laura, her entire body is evidence of the diffident nature of her character.  At the same time her sensitivity and concern for both mother, whom she some times fears, and brother is palpable.  In the candlelight scene with Jim (Tyler Lansing Weaks,) the gentleman caller, she is charming as she lets down her guard and her hidden personality shines until he informs her of Betty, his steady girl friend, soon to be wife.  Dismay pushes her once again into the shy, pained young woman she will always be. Weaks’ gentleman caller is softer and less arrogant than is usually seen in other productions.  There is a sincerity and a fondness for Laura that emanates from him.   The entire cast brings a richness of insight and astuteness to their characterizations.,

In the original, and probably most productions, background music was prerecorded.  Here, a violist (Susan French) is perched on a fire-escape platform above the set.  Composer Alexander Sovronsky’s original music is delicate and subtly enhances the dramatic tones of the play.  Though French’s performance is essential and effective, she is unobtrusive.  This choice is a powerful alternative to canned music.

Director Boyd has also mined the humor of the play.  Where the work is often performed wrapped in dramatic gravity, she has brought different textures to this production that makes the manifold confrontations even more painful, while evoking an awareness of the Wingfields’ humanity.  Her staging on Brian Prather’s set is well-balanced, producing interesting pictures.  However, there seems to be too much openness in the apartment, compromising the claustrophobia that provokes many of the arguments between Tom and Amanda.

Matthew Richards’ lighting is evocative, including the neon “Paradise” ballroom dancing sign that hovers over the apartment.  The candlelight scene is beautifully sculpted lending the stage and the scene an intimacy and warmth.  The costumes by Elivia Bovenzi capture the time and the characters.  Amanda’s dress for the gentleman caller’s dinner is atrociously fetching.

The Glass Menagerie is an American classic… deservedly so.  One of the beauties of the play is the opportunity to listen to Williams’ virtually poetic language.  With a phrase he touches upon searing emotions that help to delineate his characters’ personalities.  The play is autobiographical material which add to the perception that the Wingfields and Jim O’Connor are real people.

This is a beautiful production that enhances the play’s already radiant reputation.