REVIEW: “The Elves and The Shoemaker” Panto 2018 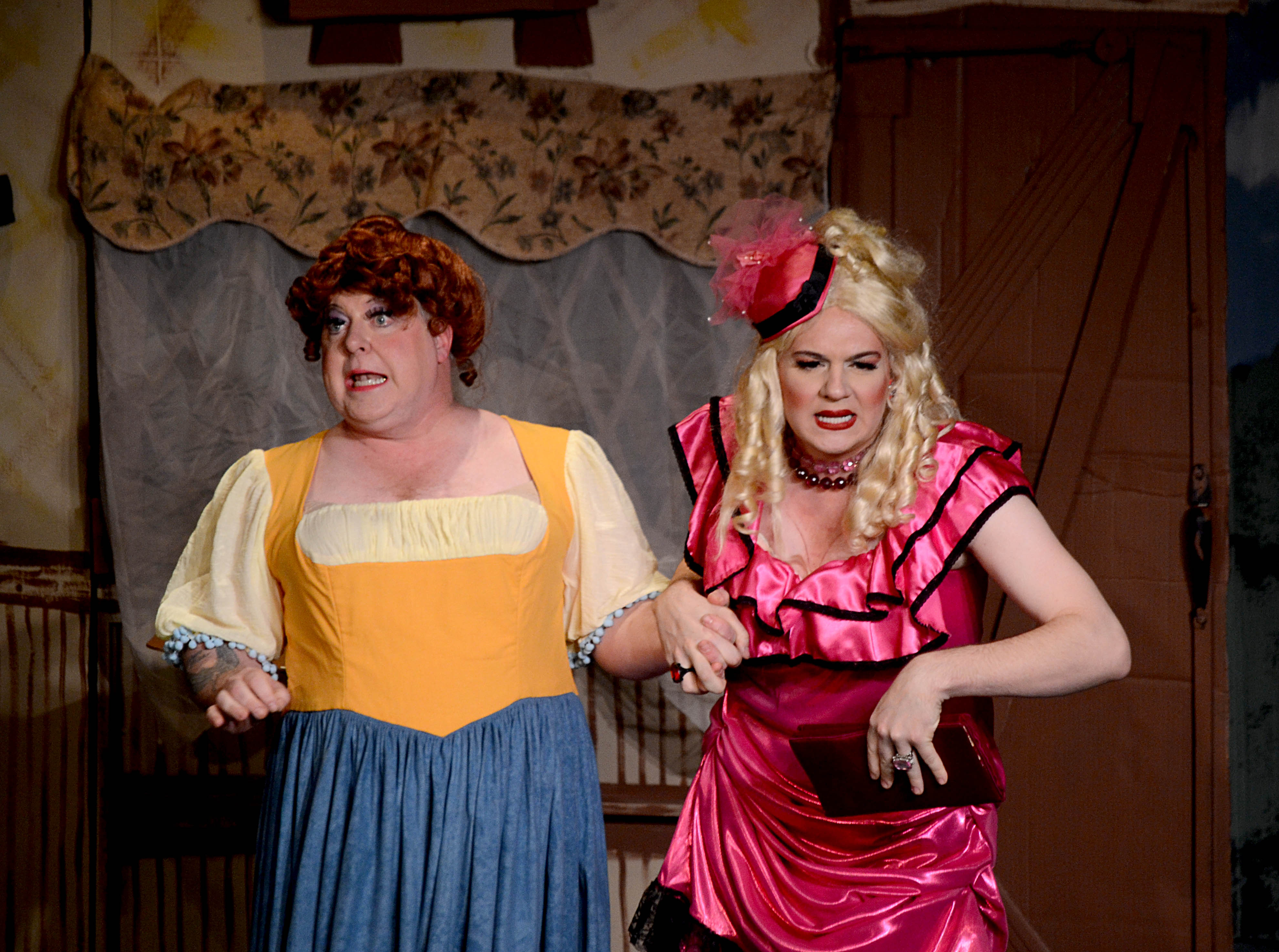 REVIEW: “The Elves and The Shoemaker” Panto 2018

After two years of good-but-not-great Panto productions, the Pantoloons at the Ghent Playhouse have regained their mojo and are currently tearing up the stage with a hum-dinger of a holiday treat. The Elves and The Shoemaker is funny, timely, and colorful. The script and songs, concocted by director Cathy Lee-Visscher and the Loons, make the best use of each performer’s unique talents. The only times I stopped smiling was when I was laughing out loud, booing the villain, or groaning at one of the seemingly endless supply of bad shoe jokes scattered throughout the show.

Quick refresher for those who don’t know what a Panto is: It is a British theatrical tradition for the holiday season. Basically you take a familiar fairy tale or folk tale, have all the men play the women and the women play the men, add lots of new and (hopefully) witty lyrics to well-known tunes, and ignore the plot completely. There is lots of audience interaction and a healthy mixture of topical humor on current events along with good old fashioned schtick. Only the most conservative and humorless of folks can fail to be amused by the goings-on.

In Columbia County this tradition was started in 2000 by British-born Judy Staber. Staber has now stepped aside and only two original Loons remain, but a continuing corps of like-minded Loonies gather to pen and perform a new and original Panto in Ghent every year.

The plot, such as it is, involves humble shoemaker Aloysius Schumacher (Emily Spateholts) and his devoted wife Sophie (Mark “Monk” Schane-Lydon) who have fallen on hard times because of his dedication to making the same sturdy serviceable brown shoes over and over and over again. Even the demure denizens of the tiny town of Shoe Falls are bored with them! When the evil Frank Zappo (Mark Wilson) and his flashy mate Espadrilla (Sam Reilly) blow into town and open a rival shoe shop, everyone flocks to buy the latest styles.

Luckily Uber Elf (Catherine Schane-Lydon, who also serves as keyboardist and musical director) takes pity on the Schumachers and sends elves Tap (Sally McCarthy) and Stitch (Cathy Lee-Visscher) to help out. But it’s not until they join forces with Aloysius’s flamboyant nephew Hymie (Meaghan Rogers) that the real magic happens.

For devoted Panto fans just the notion of Mr. Schane-Lydon and Reilly in drag, of McCarthy and Lee-Visscher harmonizing, of Joanne Maurer’s hilarious costumes and of Reilly’s ingenious cardboard sets, are enough to ensure 90 minutes of inimitable fun.

And none of these disappoint. Who knew that Mr. Schane-Lydon is a dead-ringer for the late Charlotte Rae when you slap a red wig on him? I expected the Facts of Life girls to make an appearance at any minute (they don’t, darn it, and if there was ever a prime place for Tootie on roller skates it is in this Panto.)

Reilly is drop-dead gorgeous in drag, and his Espadrilla Zappo is an homage to that living legend (yes, she is still alive and cuchi-cuchi-ing) Charo. Lest any Millennials who have never seen re-runs of The Love Boat mistake Reilly’s character for a humiliating Latina stereotype, be informed that Charo IS a humiliating Latina stereotype. That is her schtick and she has stuck with it even though she is an acclaimed Flamenco guitarist. In 2006 she was quoted as saying “around the world I am known as a great musician. But, in America I am known as the cuchi-cuchi girl. That’s okay because cuchi-cuchi has taken me all the way to the bank.”

Wilson, who gets to appear at the very end of the show as his unassuming self, is an outstanding Zappa-esque Frank Zappo in curly black wig, mustache, and enormous white platform shoes in which he dances nimbly during his big solo “Sole Man.” (I warned you about the shoe jokes, didn’t I? The clever combination of the Frank Zappa gag, the dig at the Zappos online shoe store, and the fact that zapatos is Spanish for shoes is the kind of layered humor that makes the Panto such fun.

Spateholts and Rogers, both of whom are sophomore Loons, have really found their footing this year in trouser roles. My ONE complaint about Maurer’s costumes – and literally, I have only this one – is that the blinged out gold boots on Rogers accented her feminine curves because they were high heeled. A lower heel would have made her a more believable guy, albeit one “a little light in the loafers.”

One of the highlights of the Panto is when McCarthy, a professional chanteuse, gets to belt out a couple of numbers. This year she and Lee-Visscher team up for a really dynamite take-off on “The Lion Sleeps Tonight” that is literally worth the price of admission in and of itself.

The other original Loon, along with McCarthy, is Maurer, who has also costumed all 19 annual outings. Always included on stage, she has been a timid performer in years past, but this year keep your eyes peeled for her Carl Perkins impression – Yowza! She plays three characters total, and her final costumed incarnation is priceless.

As always, the topical humor in the Panto has a decidedly liberal bent, so if that is not your cup of tea, stay home. Otherwise, this is the perfect holiday outing for the whole family. Every year you get the same old Christmas Carols and Nutcrackers, but you always get a brand spanking new Panto. Enjoy!

The Elves and The Shoemaker runs November 23-December 9, 2018, at the Ghent Playhouse, with performances Fridays and Saturdays at 8 p.m. and Sunday afternoons at 2 p.m.. Tickets are $20 each, $17 for Members of the Playhouse and $10 for Students.  Tickets may be reserved by calling 1-800-838-3006 or going to the website at www.ghentplayhouse.org.